The Channel Islands Under Nazi Rule 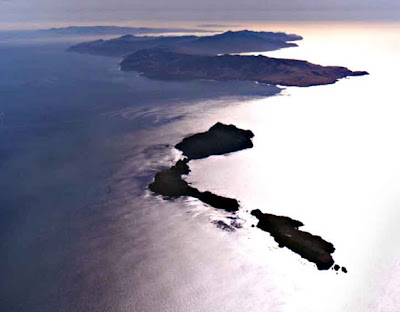 " ... The Channel Islands' war history was one of almost total collaboration with the Nazis. ... How was Victor Carey treated after his wartime record of referring to the Allies as 'the enemy?' After the war, he was knighted by King George VI. ... "

Our predominant image of Britain in World War Two was of the bombing of London. Winston Churchill and Princess Elizabeth personified the grim determination of the people of the United Kingdom to defeat the Nazi menace at whatever cost might be necessary. The sacrifices of soldiers lend eternal resonance to this bloody chapter in British history.

The Channel Islands History took a sharp turn from the British mainland on June 30, 1940. ... There was a window of opportunity in which those who wished to could evacuate to the British mainland. About a third of the islanders did so. On Alderney, almost everyone left. On Jersey, relatively few did so.

The Germans were not harsh with most of the Channel Islanders. there were restrictions on listening to the BBC. There were deportations to labour camps on the European mainland of non natives. among these non natives were 17 Jews, some of whom were murdered in concentration camps.

There was some resistance to the German occupation. Almost all of it was symbolic, such as defacing street signs. Occasionally, escaped slave labourers were given refuge. In General, the civil service shifted allegiance to their new German masters, implementing the new order.

For Spanish Civil War prisoners and Russian Prisoners of War, the Channel Islands were far more grim. there was a forced labour camp that was built in Alderney, upon the ruins left by retreating residents who wanted to leave nothing of use to the Germans. After their hurried departure, the entire island was turned into a forced labour camp. ...

"The Channel Islands' war history was one of almost total collaboration with the Nazis. It has taken decades for the islands to admit their role in the Jewish deportations, which took place when Guernsey and Jersey absorbed Nazi Germany's anti-Semitic laws into their own legal system. Today there is still shame about the issue, and the islands' governments are uneasy about revealing what happened during the second wave of deportations." ...

The British deportees included pregnant women and babies. It was a harsh deportation in which some died Julia Pascal, in the London Independent paints a damning picture of the useful and wholehearted collaboration of channel Islanders. She compares the Bailiff of Guernsey, Victor G. Carey to Marshal Petain in France, who traded his medals for valour for the role of Nazi collaborator. How bad was Carey? At one point he offered a 25 Pound reward for anyone who provided information useful in the apprehension of those who defaced German signs with anti Nazi graffiti.

How was Victor Carey treated after his wartime record of referring to the Allies as "the enemy"?

After the war, he was knighted by King George VI. To this day, critical records on the island remain classified. The checkered history of the Channel Islands is kept under wraps. ...

http://www.rantrave.com/Rant/The-Channel-Islands-Under-Nazi-Rule.aspx
Posted by Alex Constantine at Friday, May 08, 2009