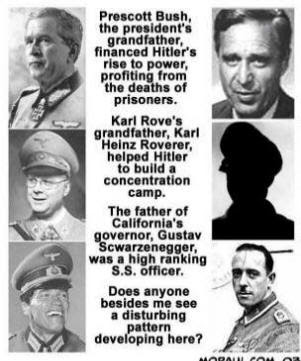 BANGKOK, Thailand — Adolf Hitler was a psychopath and a monster but rose to power thanks to big business leaders and other supporters who appreciated his vow to destroy communism and control workers, Hollywood filmmaker Oliver Stone said Monday.

Stone, who is working on a 10-part documentary on the 20th century titled "The Secret History of the United States," said the German dictator was "enabled by Western bankers" and managed to "seduce" Germany's military industrial complex.

"Hitler is a monster. There is no question. I have no empathy for Hitler at all. He was a crazy psychopath," Stone told reporters in the Thai capital. "But like Frankenstein was a monster, there was a Dr. Frankenstein. He is product of his era."

Stone was in Bangkok to give a lecture to high school students on the role of film in peace-building as part of a visit organized by the Vienna-based International Peace Foundation.

He said the aim of his documentary, which two historians are helping him with, was to offer a fuller understanding of the 20th century and how some of those lessons may be relevant to President Barack Obama in 2010.

"What has America become? How can we in America not learn from Germany in the 1930s," the Oscar-winning director asked.

Earlier in the day, Stone told about 300 students that his 1991 movie "JFK," was his most controversial to date and that the United States remains in denial over the possibility that someone other than Lee Harvey Oswald could have assassinated John F. Kennedy.

Stone said exploring alternative theories over the JFK assassination remains too sensitive for those in the media or academia who "would be endangering their careers and their position."

"To this day, many key Americans in power are in total denial about this story," Stone said. "They don't even want to know about the possibility that he was killed by someone other than Lee Harvey Oswald. It is a national fairy tale."

Stone's film centred on a theory by New Orleans District Attorney Jim Garrison that a CIA-led mutiny killed the president and the plotters walked away unscathed. Garrison's theories went to court in 1967, but Clay Shaw, the alleged "evil genius" behind the assassination, was acquitted.

Stone said Monday he thought it was "a good thing" to revisit the JFK assassination. But he came under fire from the historians and film reviewers who contended Stone had fudged facts, invented characters and elevated speculation to truth to support his burning belief that the killing was a high-level government conspiracy.

"It's an amazing story and I did it," Stone said. "I thought I would be respected for it, and I was lambasted in the establishment press. I was called a myth-maker, a propagandist. I didn't see it coming. I thought the Kennedy murder was safe."

Stone is famous for several other movies, including the Vietnam War films "Born on the Fourth of July" and "Platoon," which won four Oscars, including best picture and best director.