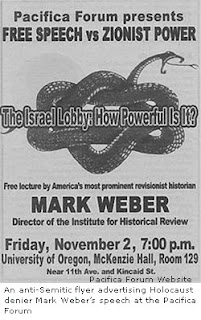 University to Address Pacifica Controversy
Students plan demonstration to coincide
with Forum meeting at 3 p.m. today in the EMU

University administrators are rethinking the school’s policy on providing meeting space after another controversial event at the Pacifica Forum, a local discussion group that some have criticized for being racist and bigoted.

At the Pacifica Forum’s Dec. 11 meeting on campus, speaker Jimmy Marr gave a presentation, titled “The National Socialist Movement: An Inside View of America’s Far-Right.” According to several accounts, Marr and other audience members in the room gave Nazi salutes.

Another Pacifica Forum meeting, titled “Everything You Wanted to Know about Pacifica Forum but were Afraid to Ask,” is scheduled today at 3 p.m. in the EMU Walnut Room. Some students are planning a counter-demonstration to protest the group’s alleged anti-Semitism.

Michael Williams, a member of Eugene’s Anti-Hate Task Force who has monitored the forum since 2003, said Marr “expressed serious concern that white DNA is not being safeguarded from pollution by other groups.”

The Pacifica Forum was founded in 1994 by Orval Etter, a retired University professor. Under a policy that gives former professors access to University space, the Forum enjoys free meeting space on campus.

The Forum was originally formed to discuss issues of pacifism and non-violence, but over the years several critics have come to think of the group as home to a few self-proclaimed white separatists who have held sway over much of its programming. It is now listed as a hate group by the Southern Poverty Law Center.

In recent years, the Forum has hosted several prominent Holocaust deniers, such as David Irving and Mark Weber, which sparked rounds of protest from community and campus Jewish groups.

Members of the Forum have neither confirmed nor denied that they are anti-Semites, but in April 2007, Etter told the Emerald that he had not bothered to confirm nor refute the accusations because criticism “gets us attention” and gives meetings “livelier spirit.”

In 2008, at the urging of Oregon Hillel, then-University President Dave Frohnmayer addressed the issue in a letter, calling forum members’ actions “gutter bigotry.” He went on to write:

“Groups such as this that use University facilities from time to time do not speak for the University of Oregon. Nor does the appearance of any invited speaker or the use of our facilities imply the institution’s endorsement, support, or even its moral indifference to the content of a message.”

University Vice President of Institutional Equity and Diversity Charles Martinez echoed Frohnmayer’s sentiments in a letter to the Eugene Weekly shortly after the Dec. 11 meeting.

“We are addressing our policies about how best to proceed with our mission and values while safeguarding the campus community and the values of free speech,” Martinez wrote. “While I strongly believe that the UO must defend the free exchange of ideas and promote intellectual inquiry, we have a greater responsibility to turn ideas into the discovery of knowledge in a manner that is inclusive and welcoming to all our students and the
communities we serve.”

In a phone interview, Martinez said that University President Richard Lariviere will be meeting later this month with members of the Anti-Hate Task Force to talk about the Forum’s content.

Martinez said the University values free speech and has no litmus test for groups seeking University space, but he questioned the Forum’s motives.

“Higher education really should be a place where there is this broad exchange of ideas,” he said. “On the other hand, is this what the Pacifica Forum does, and is this what happens at the meetings? My concern is that there is hate-mongering disguised as academic inquiry. If there is, we do as an institution and community have a responsibility to respond to it.”’

“Today’s PF is not the same Forum as 2007 or 2006 or 2005 or any previous years, no matter what Michael Williams may say,” Rojas wrote in an e-mail. “Yet Williams persistently cites incidents from the pre-2008 past, which are mostly irrelevant for 2008-09, as if they have major importance. Actually, at the recommendation of the group’s founder, University emeritus professor Orval Etter, Pacifica set out on a new course starting on Aug. 1 of 2008, with focus on free speech and education.”

Williams, however, said hateful content at the meetings is rarely, if ever, countered and has in fact grown more frequent over the last few years.

“The Pacifica Forum’s topics have broadened to include bigotry against Latinos, blacks, Muslims, homosexuals,” Williams said. “You name a group that is a typical target of far right-wing hate, and the forum has had a program on it. And while there may be dissidents among some of the regulars, the programs continue.”