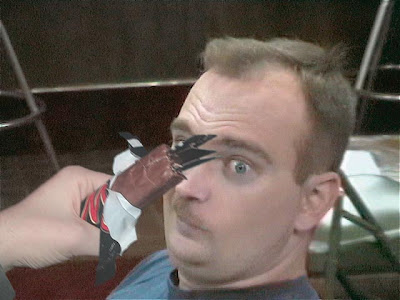 For more on Warren Buffett, the son of a Nazi collaborator, and of Omaha child prostitution fame, see: "Duncan/Blake 'Suicides' Solved"

" ... A notoriously secretive Virginia-based firm, it is run out of an anonymous brown building near the CIA's headquarters. ... "

Andrew Clark in New York
The Guardian
May 3 2008

You may think that a chocolate company with one of the world's most famous brands would have a flashy headquarters with a visitors' centre and a neon sign. Not Mars. A notoriously secretive Virginia-based firm, it is run out of an anonymous brown building near the CIA's headquarters.

Nicknamed "the Kremlin" for its opaque ways, the snacks manufacturer is wholly owned by a reclusive dynasty of billionaires who spend a good deal of time on a remote ranch in Wyoming.

This week's $22bn (£11.6bn) takeover of the chewing-gum maker Wrigley put Mars dead centre on Wall Street's radar screen - giving the firm the kind of visibility it had studiously avoided for 98 years.

"They're based in a dark, hidden building," says Jan Pottker, author of a tell-all book about the Mars family, Crisis in Candyland. "It's simply incredible - rather than being proud of their company, they don't want to be noticed."

With 129 factories and 223 offices in 66 countries, Mars employs 48,000 staff and commands annual sales of $22bn. As well as confectionery such as its eponymous bar, Twix, Snickers and Starburst, its lines include Uncle Ben's rice, Dolmio pasta sauces, Masterfoods ready meals and Whiskas catfood.

Its move for Wrigley came out of the blue - astonishingly audacious for such a relentlessly low-profile business.

"Mars is a very, very quiet company," says Mitchell Howard, a food analyst at the stockbroker Morningstar in Chicago.

He believes the deal's logic is largely driven by marketing muscle and by distribution power - the combined company will command shelf space at more corner-shop retailers, particularly in emerging markets.

"This gives them a huge distribution footprint all over the world," says Howard. "Wrigley has a lot of distribution in Asia and eastern Europe. The retail trade is a lot less consolidated in those markets, so distribution really matters."

The deal, agreed in only three weeks, was negotiated with Wrigley's bosses over sandwiches around the kitchen table of Mars's president, Paul Michaels. Mars tapped the world's richest man, Warren Buffett, for $6.5bn and secured a further $5.7bn from Goldman Sachs.

Food industry experts see it as a sign that Mars is finally opening up - possibly due to the influence of Michaels, a former Johnson & Johnson executive who is part of a first generation of non-family members to be responsible for the day-to-day business.

"They did have a leadership change about four years ago," says Howard. "They've got quite aggressive in terms of advertising and innovation; there have been more product extensions, more line extensions."

Michaels took the reins in 2004 after the retirement of Forrest Mars Jr and his brother John who, with their sister Jacqueline, still own the company. They are the grandchildren of Franklin Mars, a Minnesota-born entrepreneur who started the company by making butter-cream sweets in his kitchen.

Forbes magazine estimates that each of the three siblings has a fortune of $14bn. But they don't grace the society pages of American newspapers and grand gestures of philanthropy are not their style. The nearest they have come is making occasional donations to the Republican party.

Mars will say only that certain descendants of Frank Mars still occupy management positions and refuses to reveal how many of them sit on the board. When the second-generation boss Forrest Sr died aged 95 in 1999, Mars would not even confirm his death.

Traditionally, Mars has been deeply conservative and highly competitive. It lobbied Congress to change the end of daylight saving time to get an extra hour's evening light on Halloween - a crucial day for selling confectionery.

Its strait-laced approach has sometimes tripped it up. Mars refused to allow its M&Ms to be featured in Steven Spielberg's blockbuster ET. So the film's young hero, Elliott, used Hershey's Reese's Pieces to lure his alien friend to come out from a hiding place - prompting rocketing sales.

"You couldn't laugh at the products in any way," says Pottker. "At the time, they would never do a product placement, certainly not with an extra-terrestrial."

She says the "cult of secrecy" around the firm dates back to the second world war when Forrest Mars Sr patented a method of parboiling rice to extend its shelf life - subsequently launched as Uncle Ben's rice. US military chiefs read about the patent and tried to overturn it to supply troops.

"Forrest was absolutely appalled at what even a positive article about rice could end up with," says Pottker. "The kids took it to heart."

This insistence on privacy has been a useful device in helping the Mars family to maintain its unanimity, according to Joseph Astrachan, an expert in family enterprises at Kennesaw State University in Georgia. He says it implies betrayal if any relative dissents or talks to outsiders. "It keeps the family aligned - you don't give the people the sense that they can go elsewhere," says Astrachan. "They've been unswayed, unbowed by the so-called experts who tell them to do things differently."

A booklet signed by 13 members of the family gives a glimpse into their thinking. The pamphlet, the Five Principles of Mars, explains what makes the company "different". It lists quality, responsibility, mutuality, efficiency and freedom - of which the last is described in a curious way.

Private ownership, the pamphlet says, is crucial to Mars's "freedom" as it means the firm is not answerable to anybody. "Many other companies began as Mars did, but as they grew larger and required new sources of funds, they sold stocks or incurred restrictive debt to fuel their business," wrote the Mars clan. "To extend their growth, they exchanged a portion of their freedom."

Mars has shown more flexibility in recent years. In response to concerns over obesity, it has launched a range of healthier snacks for school vending machines called Generation Max. And it has developed a chocolate ingredient called CocoaVia that can help lower cholesterol levels.

The fact that Wrigley, too, is a family company may have smoothed the path to this week's deal. The Wrigley family controls 60% of the gum-maker's stock and is chaired by Bill Wrigley, great-grandson of the founder William Wrigley - a baking-powder salesman who began giving away free packets of gum to merchants in the 1890s.

In the chewing-gum company's hometown of Chicago, the Cubs' baseball stadium is called Wrigley Field and the white terracotta-clad Wrigley Building is an architectural landmark, floodlit at night on the Chicago river. The Wrigleys command a degree of public respect - a little like another legendary American business founder, Wal-Mart's Sam Walton.

"People have an affection for people like Sam Walton," says Pottker. "I don't think anybody gives a damn about Frank Mars."

http://www.guardian.co.uk/business/2008/may/03/fooddrinks.mergersandacquisitions
Posted by Alex Constantine at Thursday, May 29, 2008