The CIA visits the Cascades 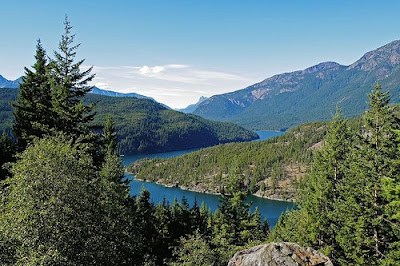 Big Lake, and the Skagit Valley, have served as a kind of home base and anticipated retirement destination for Robert Gates through his stints as Central Intelligence Agency director, Texas A & M president and (now) Secretary of Defense
.
The Pacific Northwest, in summer, is known as a favored spot for retreats of top brass in business and politics . . . hence, a story that has become part of North Cascades National Park lore as the park complex approaches its 40th anniversary.

A National Park Service ranger was patrolling Ross Lake by boat some years back when he spotted a sizeable party camped along the lakeshore. Quickly checking records, he found that no permit had been issued for the backcountry site, as is required in the Ross Lake National Recreation Area.

The ranger steered over to the campsite, perhaps to issue a citation. He was met by a phalanx of armed guys in very good shape.

It turned out that then-CIA director Gates was conducting a backcountry get together of brass from The Company. The confrontation quickly eased. Once off the lake, Gates dispatched a conciliatory note and autographed photo to the ranger who had apprehended him.

The photo hung for years at the Marblemount Ranger Station. If you stop by to get a backcountry permit this summer, check on whether it is still there.