Memorial Plaque for the Victims of IG Farben 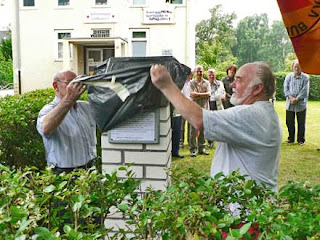 On Saturday, at a ceremony on the grounds of the Leverkusen Cultural Association, a commemorative plate was unveiled with the inscription: "1933 - 1945 IG Farben of economic crimes against the public." The plaque will be sent to the victims of IG Farben AG, in memory that a group of companies - BASF, Hoechst and Bayer - on the initiative of Bayer Board Chairman Carl Duisberg, arose and from 1926 to 1945 their headquarters was in Leverkusen. Since the "unbundling," by decision by the Allied Control Council, there is once again an IG Farben subsidiary in Leverkusen, Bayer AG.

In a brief speech at the inauguration, Manfred Demmer, vice president of the Cultural Association Leverkusen eV and a board member of the National Federation of VVN-antifascists NRW, discussed the history of IG and the Bayer Group, as well. Afterwards, participants toured a small exhibition and were given literature to enhance their knowledge of IG Farben.

"Entanglement in the Third Reich"

Bayer's own postings on the Internet (data/facts 2008/2009) address the integration of IG Farben in fascist policy: "As the most powerful chemical company in Germany, IG Farben was also instrumental in the Third Reich." The "entanglements" are confirmed by a display that provides concrete examples. One of them was IG Farben-worker Frieda Hansel, believed to be a Jew, who died on 26 February 1943 in the Birkenau women's camp. Other panels provide information on wages at IG Farben in Leverkusen, also on forced labor in the IG Farben plants in Leverkusen, among other topics.

Rethinking the city of Leverkusen?

The visitors, including active anti-fascists, such as Wolfgang Stückl, chairman of the Leverkusen hospital, were impressed by a wealth of hitherto, little-known information in the Bayer/IG Farben history. On a positive note, it was observed that the city is changing and was very receptive to invitations to the memorial's unveiling ...
Posted by Alex Constantine at Tuesday, July 21, 2009