Vitter is for "Core Conservative Values"

David Vitter claims the reason the GOP is so unpopular is because Republicans haven't been "conservative" enough - not because they are pathological liars. "The Washington Times article did not mention anything about the D.C. Madam scandal. ... " - AC 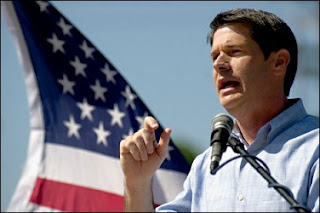 Vitter Responds To Voinovich: I'm For "Core Conservative Values," Not For Straying From Them
By Eric Kleefeld
July 29, 2009

"I'm on the side of conservatives getting back to core conservative values," Vitter told the Washington Times. "There are a lot of us from the South who hold those value, which I think the party is supposed to be about. We strayed from them in the past few years, and that's why we performed so badly in the national elections."

As for Voinovich, Vitter said: "He's a moderate, really wishy-washy."

Speaking of conservatives who have strayed from core values ... David Vitter was publicly identified as a former client of prostitutes, and admitted in 2007 to an unspecified "serious sin." The Washington Times article did not mention anything about the D.C. Madam scandal. ...