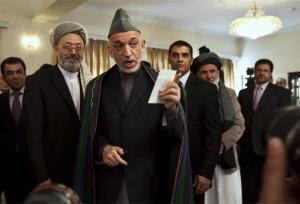 By Kim Sengupta in Kabul
4 November 2009

Hamid Karzai began his new presidency yesterday with a pledge to reach out to opponents and tackle the corrosive corruption which has deeply tainted his government and led to widespread international condemnation. But he appeared to rule out sacking ministers and officials accused of corruption and did not say how he would tackle the systemic malpractice and criminality which has undermined governance during his tenure.

The US and other Western countries are demanding root and branch reforms and a major drive against corruption in return for additional troops and vast amounts of money.

Mr Karzai, making his victory speech, was flanked by his two running mates, Marshal Muhammed Qasim, accused of drug trafficking by American officials, and Karim Khalili, who was accused in a recent human rights report of war crimes.

Asked whether he was prepared to boot out public figures who have abused the law Mr Karzai responded: "These problems cannot be solved by changing high-ranking officials." He acknowledged, however, that Afghanistan has a "bad name" for corruption and pledged: "We will do our best through all possible means to eliminate that dark stain from our clothes."

Mr Karzai was anointed President on Monday afternoon by an election commission he had appointed which also cancelled a second round of voting due next weekend. The run-off, with rival Abdullah Abdullah, was ordered after Mr Karzai was stripped of a million of his votes from the first round for massive ballot stuffing.

Dr Abdullah, who dropped out of the run-off at the weekend, was last night said to be considering whether to challenge Mr Karzai's reappointment in the supreme court. His supporters had been pressing for an interim government with new elections to be held in the spring.

There is little chance of the court overturning the decision and there is no appetite for the electoral process to continue either among the majority of Afghans or the international community. The US and its allies will thus have to keep propping up a ruler they have repeatedly and publicly criticised.

Barack Obama, who is deciding whether to send up to 40,000 more troops to Afghanistan, phoned Mr Karzai to congratulate him on retaining power, but stressed that he must take a tougher stance against corruption and promote better government. In response to reassurances from Mr Karzai, the US President responded that the "proof is not going to be in words. It's going to be in deeds".

President Obama said he wanted the Afghan President "to move boldly and forcefully forward and take advantage of the international community's interest in his country to initiate reforms internally. That has to be one of our highest priorities." Gordon Brown meanwhile said: "What we want to see is a corruption-free government, an inclusive government."

Mr Karzai pledged to work for all Afghans. "No one will see themselves distanced in this process. All of us will be included as part of Afghanistan's government." He also urged insurgent fighters to re-enter civic society, saying: "We call on our Taliban brothers to come home and embrace their land."

But the Taliban issued a statement mocking the outcome and claiming their own victory in stopping the second round of voting. "What is astonishing is two weeks ago they were arguing that the puppet president Hamid Karzai was involved in electoral fraud... but now he is elected as President based on those same fraudulent votes, Washington and London immediately send their congratulations."

In the streets of Kabul, many people said they wanted to leave the past behind. "If the corrupt officials who have been sucking our blood for long years are dismissed and punished publicly, we will hope for a better future, otherwise the next five years will go in vain," said a shopkeeper, Ghafoor Ahmadi.