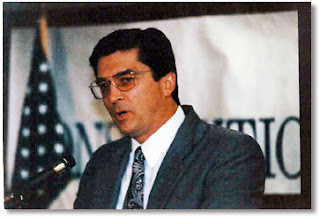 Mack became a rising star in the militia movement during the 1990s when he sued the federal government over the Brady Bill, a gun control measure. For over a decade, he has been the darling of the anti-government crowd. He’s made a career out of appearing at events with notorious tax protestors, hardcore militia activists and a laundry list of dubious self-styled “patriots.”

It’s troubling that the local central committee views Mack as their ideological counterpart.

During his remarks at the event, Mack repeated his standard mantra that the federal government isn’t following the Constitution. He told attendees to stand up to the feds and not worry about retaliation, because “we have a lot of posse here, and they’re armed.” Before and after that remark, Mack did the expected rhetorical dance of claiming that he doesn’t support violence.

The Lewis and Clark County Republican Central Committee will most likely say Mack is a credible speaker because he is a former sheriff. It’s true he was elected sheriff in 1992 in Arizona’s Graham County. As sheriff, he filed his lawsuit against the Brady Bill. The U.S. Supreme Court ruled 5-4 in the case that it was unconstitutional for Congress to compel local law enforcement to conduct background checks on potential gun buyers.

However, Mack’s lawsuit and speaking time on the “patriot” circuit became central issues during his 1996 re-election bid, and he lost in the primary. The local central committee could learn something from Arizona voters.

Mack is touring the country and trying to get sheriffs to adopt his brand of county supremacy. He promotes the supremacy of the county sheriff, which follows the tradition of the white supremacist Posse Comitatus. The Posse viewed the sheriff as the highest legitimate law officer in the land. It believed citizens were not subject to state or federal authorities. For the Posse, it was up to the sheriff to use force, if necessary, to prevent federal agencies from seizing property to pay taxes and to oppose any perceived encroachment by federal institutions.

Mack’s statements over the years reflect the Posse tradition. “The federal government doesn’t have any jurisdiction to tell me what to do as sheriff,” he has told the press. While running for the U.S. Senate in 2006 on the Libertarian Party ticket, Mack stated he would “do everything in my power to abolish the income tax and its ‘Gestapo’ police, the IRS.” In a 2009 interview, Mack said he “prayed for the day that a sheriff in this country will arrest an IRS agent” for enforcing tax law.

The love affair between the militia movement and Mack is a two-way street. He was an avid supporter of the militia movement before one of its adherents, Timothy McVeigh, bombed a federal building in Oklahoma City, killing 168 people and wounding almost 700 more. He has continued to support militias since. Instead of condemning them as domestic terrorists, he lauds militia members for having the “courage to stand for freedom.” He even edited a book by Randy Weaver, the white supremacist whose standoff with federal authorities at Idaho’s Ruby Ridge helped launch the militia movement of the 1990s.

Mack’s appearance in Helena (and in other parts of the state) is an example of the resurgence of the right wing that is currently happening in Montana and across the country. Anti-government activists are mobilizing the fear and resentment in our communities due to the current financial crisis and a new presidential administration. We have repeatedly seen extremists like Mack hide behind erroneous interpretations of the Constitution and issue shallow calls to patriotism.

Travis McAdam is executive director of the Montana Human Rights Network. The Network can be reached at P.O. Box 1509, Helena, MT 59624. Sources for the quotes above can be found in the “Richard Mack Visits Montana” briefing paper found at http://mhrn.org/specialresrpt.html.