"I made a mistake and left a bullet clip from a camping trip in some luggage. Now my Fiancé and mother-in-law are in jail in India. Even the Santa Barbara Chief of Police agrees this was an honest mistake. Please help us get the support we need to set Heather and Monica Bond FREE by filling out the petition. Thank you for your support!" -- Sean McGaughey

Statement of Santa Barbara's chief of police (click to enlarge): 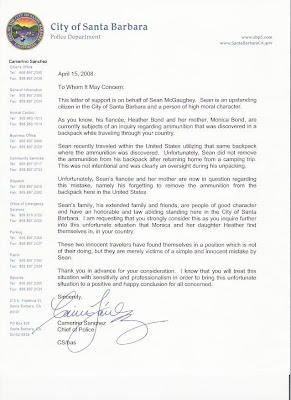 KOLKATA: U.S. nationals Monica Bond and her daughter Heather, detained after 9 mm cartridges were found in their baggage during a security check at West Bengal’s Bagdogra airport on Monday, are now in the Siliguri Special Correctional Home.

A senior official of the U.S. Consul General, Kolkata, visited the women at the correctional home on Wednesday, their lawyer Abhaypada Chatterjee told The Hindu over telephone from Siliguri.

Tourists from California, they were arrested under the Arms Act, 1959, and remanded to judicial custody for three days by the Additional Chief Judicial Magistrate’s court in Siliguri on Tuesday.

“Documents sought from the U.S. Consul General’s office say the women have no criminal record,” said Mr. Chatterjee, whose prayer for bail to the accused was rejected by the court.

“It is unlikely that they were procured by the women during their stay in Darjeeling from where they were returning … There was no valid document allowing them to carry the cartridges and there was a gun licence that had expired. Moreover, there were discrepancies in the statements they made to the police,” he said.

“The women were on their way to Delhi from where they were to catch a flight back to the U.S. via Taiwan on Wednesday. They had spent about five days in Darjeeling on arrival from the capital,” Mr. Srivastava said. [The Hindu]

From: The Santa Barbara Daily Sound

Two Santa Barbara women were charged yesterday in an Indian court under the Indian Arms Act for attempting to board a flight with several rounds of 9 mm ammunition and could face prison terms ranging from three to seven years if convicted, The Telegraph, a daily newspaper in Calcutta reported.

The women, Monica Bond, 57, and Heather K. Bond, 37, had been traveling in India for the past month before being detained on Sunday in an airport near Darjeeling.

Lawrence Bond, Monica Bond’s husband, said the last time he spoke with his wife was Monday night at 10:30 Pacific Standard Time, as the two women were officially being arrested. He said they had been detained near the airport for nearly 24 hours before their arrest.

The ammunition was found in a piece of luggage owned by Heather Bond. Sean McGaughey, Heather Bond’s boyfriend, said the clip of 9 mm bullets that was found belongs to him. He said he and Heather carry weapons when they camp in the backcountry near Santa Barbara and the clip must have gotten into her bag by mistake.

But that doesn’t explain why the clip wasn’t discovered earlier by security in at least four different airports, including LAX.

Lawrence Bond said this is likely the cause of the hang-up for Indian officials, who are trying to understand where and how the two women came across the clip.

“They’ve got to find a way out and save face,” he said. “I’m assuming that they might just decide to make my daughter and my wife scapegoats by doing something silly. I mean that’s my concern.”

According to The Telegraph story, the two women noticed the ammunition in the baggage before heading to the airport, but opted to leave it alone.

McGaughey said he has faxed Indian authorities the license for his 9 mm pistol and other documentation as well.

The Telegraph story said the two women have been assigned an attorney, who will appear on the women’s behalf during a hearing scheduled for Friday.

Lawrence Bond said he’s been contacted by Rep. Lois Capps, who told him she would attempt to do everything she could to help resolve the situation.
A spokeswoman in Capps’ Washington, D.C. office said she couldn’t comment on the congresswoman’s involvement.

Attempts to reach the U.S. State Department for comment were unsuccessful and a spokeswoman for the FBI said the bureau wasn’t handling the case.

Embassy officials told Lawrence Bond they were on their way to the jail yesterday to meet with the women.

He said everything appears to be moving in the right direction, but that’s how he felt on Monday night prior to the official arrests.

“We just keep hoping that at the next court appearance they’re just going to throw in the towel,” he said of the Indian officials.

Siliguri, April 15: The American women arrested in the bullet case had become aware of the ammunition in Darjeeling by chance but chose to proceed to the Bagdogra airport with the lethal luggage – a mistake that has sent them to jail for at least three days.

Monica Bond (57) and her daughter Heather K. Bond (37) – tourists from Santa Barbara in California – were today sent to judicial custody for three days. But they have been charged under the Indian Arms Act that carries imprisonment ranging from three to seven years. [Inset: Heather (left) and Monica being taken to Siliguri court. A Telegraph picture]

The Bonds told investigators that they had stumbled on the clip of 11 bullets in their luggage in Darjeeling, where they had gone after coming through Bagdogra Airport last week. “The ammunition was inside a folded umbrella. In Darjeeling, they took out the umbrella when it rained one day and found the loaded clip,” a police officer said.

Had the Bonds told authorities of the discovery of bullets immediately, they would have been treated leniently. However, an officer added: “Since they did not have any documents for the bullets, we would have had to charge them any way.”

A factor that could still work in the Bonds’ favour is their reported clean record in the US. “The FBI has faxed some of the details of my clients, confirming that they do not have any criminal record in the US,” their lawyer Abhay Prasad Chatterjee said. “Their passports are valid and they have visas till August 4 this year.”

The two were detained yesterday at Bagdogra airport when the security staff of Deccan found the bullets in a 9mm pistol clip in one of their backpacks while scanning their registered baggage. Monica, a retired nurse, and Heather, an employee of California’s forest and fire protection department, were scheduled to board the Deccan’s Flight 619 to Delhi via Guwahati.

Darjeeling police chief Rahul Srivastava said the Bonds failed to produce any document that allows them to carry ammunition apart from an expired gun licence. The two said the bullets had been in the travel bag from an earlier trip in the US and were brought to India by mistake.

In California, Heather’s boyfriend Sean McGaughey last night told Santa Barbara Daily Sound, a local daily, that the bullets belonged to him and had probably found their way into the bag on one of the couple’s backpacking trips in the Santa Barbara backcountry, where they carry weapons.

The newspaper said McGaughey has already faxed his licence for the 9mm pistol to officials concerned. “I’ve been up ever since trying to pull strings and get some action. They’re so far away and that was my concern before they left, that if anything happened, how was I going to help them?” Lawrence was quoted as saying.

Today, at 12.20pm, the Bonds were produced in the additional chief judicial magistrate’s court in Siliguri. “We sought legal help and have a lawyer now. He is yet to tell us the charges against us,” Monica told reporters while walking to the court lock-up. “The police have also informed our embassy officials in India.”

“The bail plea forwarded by me was rejected,” lawyer Chatterjee said. “The court asked the police to place the case diary on April 18 and sent them to jail.” The women were taken to Siliguri Special Jail this evening.

Chatterjee said officials from the American Consulate in Calcutta and Santa Barbara have contacted him. [The Telegraph]