How to Steal a Country - Wolfgang Droege 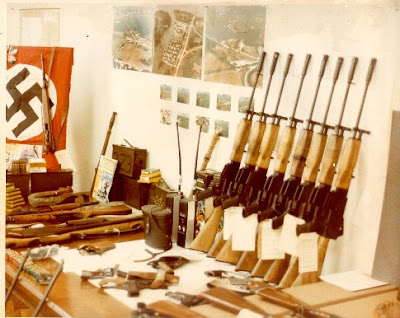 " ... The FBI terrorism section's file on Wolfgang notes his travels to Libya, involvement in the Aryan Nations and the National Socialist Party of Canada, illegal weapons, drug trafficking and his use of false identities, but the most remarkable entries concern his mercenary activities. ... "

How to steal a country
By Stewart Bell/nationalpost.com
September 22, 2008

In a new book, the National Post's Stewart Bell chronicles an audacious plot to turn a tropical island into a criminal paradise.

Walter Wolfgang Droege answered a knock at his apar tment door at 2:30 in the afternoon. It was Keith Deroux. He was standing in the hallway carrying a blue Pan Am Airlines bag with a loaded revolver inside.

Keith was a relentless junkie. He'd been buying cocaine from Wolfgang for six months. The $305 he owed was carefully recorded beside his initials in the 8 1/2-by-11-inch notebook that Wolfgang used to track his clients' debts.

Even though it was mid-afternoon, Wolfgang wore nothing but a T-shirt and underwear. He had no use for clothes. All he did these days was sell drugs out of his apartment, and the job had no dress code. His clients were desperate. They didn't care if he wore pants.

The neighbours suspected he was up to no good. Visitors would come and go at all hours. His apartment on the second floor of 2 North Drive was a regular drive-thru but the Toronto police drug squad apparently knew nothing about it. Although Wolfgang was one of those cryptically referred to as "known to police," and his FBI file warned he "should be considered armed and dangerous when not in custody," it had been years since his last run-in with the law.

Except for the large quantity of cocaine in his closet and the marijuana in his freezer, Apartment 207 was otherwise ordinary-looking -- 750 square feet, with a single bedroom, a TV and an armchair by the window. The only hint of Wolfgang's troublesome past was his signed photograph of the German far-right leader Ernst Zundel. And then there were the files on the bookshelf beside the sofa that contained the membership lists of the Heritage Front, an organization Wolfgang had once headed. More Heritage Front files were stored on his computer.

Wolfgang had started dealing drugs after leaving the Sandstone Correctional Institution in Minnesota, where he'd served two years for his crimes as a mercenary. Keith was a regular customer. He'd called on his cellphone early that afternoon and said he wanted to come over to buy cocaine, but it was a lie. By the time he got to Wolfgang's apartment, his head was spinning. He'd been drinking hard liquor, gulping Tylenol 3s and snorting coke. On top of that, he was in methadone withdrawal. He was shaking like an old man.

Wolfgang let Keith in to the apartment and went to get the cocaine, but when he turned his back, Deroux reached in to his flight bag and pulled out the Rohm .22.

"Are you alone?" Keith said.

"Ya," Wolfgang responded, with the German accent he had never quite shaken.

"I don't believe you," Keith said.

He ordered Wolfgang into the bedroom and told him to open the closet door, to make sure nobody was hiding inside. Keith was inspecting the closet, satisfying himself that it was really empty, when Wolfgang bolted. Keith opened fire but he was a lousy shot and, even at 55,Wolfgang was too quick for the quivering hand of an addict.

The first bullet hit the wall by the front door.

The second was also a miss. It sailed through the open doorway and into the hall.

Wolfgang ran for the stairwell.

He turned to look back just as Keith pulled the trigger one more time. The bullet struck Wolfgang in the chest but it didn't kill him and he kept running. He was almost at the stairs when Keith got off one last shot. It hit Wolfgang square in the back of the skull. He fell face down on the carpet.

It all happened quickly. Wolfgang did not have time to think about who might have sent Keith to kill him, and there was no shortage of candidates, seeing as he had spent his entire adult life militantly taunting, provoking, offending and plotting.

The FBI terrorism section's file on Wolfgang notes his travels to Libya, involvement in the Aryan Nations and the National Socialist Party of Canada, illegal weapons, drug trafficking and his use of false identities, but the most remarkable entries concern his mercenary activities.

Wolfgang and a Texas soldier of fortune-type named Mike Perdue had once organized a military coup on the island of Dominica, a country probably best known today as the setting for Johnny Depp's Pirates of the Caribbean films. On Nov. 3, 1978, Dominica became the Western hemisphere's 30th nation. At the Independence Day ceremony in the capital, Roseau, Prime Minister Patrick John, the opposition leader Eugenia Charles and Princess Margaret watched as the Union Jack came down and up went the flag of Dominica, a circle of stars surrounding a Sisserou parrot. Centuries of French and British colonial rule were over but Dominica's troubles were only beginning.

Within months, Wolfgang and Perdue were working on a plan to invade the island. They called it a strike against communism, but their motives were mainly financial. They military intervention. It is also the story of two federal undercover agents from New Orleans and their confidential informant, who stumbled on to the biggest case of their lives.

It costs money to make war. You have to buy weapons and ammunition, hire mercenaries and pay their room and board and transportation expenses. Even in a country as small as Dominica, the bills pile up. Mike Perdue and Wolfgang Droege were not rich men. They were both jobless. They didn't have the money to finance a military expedition. They needed investors. They needed to find people who not only had money, but who would be willing to sink it in to a country they had probably wanted to steal the country and turn it in to a crooks' paradise. The North American far-right wing was involved, along with the Mob and financiers in Las Vegas and Mississippi. So was the island's ex-prime minister, his army chiefs and a gang of Rastafarian guerrillas. Some believe the CIA was in on it, too.

It was one of the most audacious heists ever attempted, and until now the true story behind it has never been fully told.

This is the story of that coup. It is the story of how a Texan kicked out of the U. S. Marines and a militant Canadian Nazi teamed up to topple a Third World government for profit, adventure and power. It is a story about the Cold War, greed, revolutionary politics and the morality of foreign never heard of, for a mission that was clearly not above board and that might not even succeed.

So they went to Las Vegas.

It was a logical choice. Part of the evolving plan was to turn Dominica into a gambling haven. Once he secured the island, Perdue was going to build casinos and bring in foreign tourists. The profits would be split between the government, the mercenaries and their investors.

Carlton Van Gorder was a veteran in the gaming industry. He met Droege and Perdue at the Vegas airport and dropped them at a motel for the night. The next day, Van Gorder took them to meet a few men who had money to invest. "We probably spent four or five hours with them," Van Gorder recalled in an interview. The meeting did not go well. "We decided we wouldn't have anything to do with them. They were a little on the shady side," Van Gorder says. "I mean, anyone who talks about toppling a government, they aren't the type of people you go in to business with." But a gaming executive named Tommy Thompson agreed to meet them in Memphis.

For all their similarities, Perdue and Droege were an unlikely partnership. Perdue was a hustler. The only thing that seemed to get him excited was money. Droege was dogmatic. He was deeply into white power. He cared about the money, but partly because he thought it would help advance his cause. To that extent, in Vegas, where it was all about money, Droege was just a prop. Perdue did the talking while Wolfgang, with his Klan credentials and David Duke connections, sanctified the invasion as a political act.

Perdue was trying to lure investors by promising big profits but he was also appealing to their sense of patriotism. He talked about how the Cubans had tried to bring aid to the island after a hurricane, and how the citizens of Dominica had flown American flags in a protest against the communists. Painting the island red helped Perdue sell his plot. Mercenaries often dress up their profiteering and adventurism in the language of politics, telling each other they are fighting corruption and dictatorship. Maybe it helps them sleep at night but in the end, they are soldiers of fortune, like bank robbers or car thieves, only with more ambition. They steal entire countries.

The heist that Perdue was planning was going to be very profitable -- if it all worked out. Dominica was by no means a wealthy place, but imagine the money you could make if you had the run of your own country? In exchange for staging a coup that would return the former prime minister, Patrick John, to power, Perdue and his band of mercenaries were going to own the prime minister and his island.

They could build casinos. They could cut down the trees and sell them off. They could sell drugs and guns. They could print themselves diplomatic passports and commit crimes around the world with immunity. Who was going to stop them? They would be their own sovereign, criminal nation. - Excerpted from Bayou of Pigs: The True Story of an Audacious Plot to Turn a Tropical Island into a Criminal