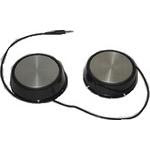 While browsing the Web, I learned that President Alvaro Colom of Guatemala had asked the FBI to launch the espionage investigation after 7 unauthorized listening devices and 2 spy cameras had been found in the presidential office and residence.

Similar devices were also found in a hall where the Council of Ministers is used to hold its sessions, and in the offices and home of the country's first lady Sandra Torres. Guatemala`s Vice President Rafael Espada was either unhappy to know he had been eavesdropped- the microphones were hidden in the lamps and in his calculating machine. The information received through bugs and cameras was transmitted to an undefined check point (or points) with the help of special transponders installed in window frames.

The purpose and scale of this operation prove that the participation of qualified professionals (who had agents among the presidential aids) is undeniable. Alvaro Colom was quoted as saying that “We, members of the government, were betrayed by our closest aides”. Though the investigation yet has not begun, the President said drug mafia was behind this eavesdropping campaign. The version received extensive coverage in the local media, and other versions even did not appear.

Nobody dared to remembers that the US CIA had been traditionally involved in such cases. Guatemala knows from its own bitter experience what it is like to deal with the CIA. President of Guatemala Jacobo Arbenz, who ruled the country in 1951-1954, was toppled as a result of a CIA conspiracy. This story has already become a classical example of US successful activity aimed against ''unfriendly'' regimes. Today we can learn practically everything about that large-scale operation after its participations wrote memoirs and the US intelligence services disclosed the archives. The story with the toppled Arbenz left Guatemala without promising reforms and caused long bloody repressions organized by the CIA.

Many years have passed since then, but today the US fears to see the revival of the ideas put forward by Arbenz in the 1950s. The US plans would have been disrupted if an independent politician appeared in Guatemala, able to carry out radical structural reforms like the ones which are now in full swing in Venezuela, Ecuador, Nicaragua and Bolivia. In the last presidential elections in Guatemala, the Bush administration banked on a retired General Otto Perez Molina,who used to actively cooperate with the US special services while promoting counter-guerrilla ideas in Guatemala. Perez is a graduate of the School of the Americas and of the Inter-American Defense College. Between 1998 and 2000 he represented Guatemala on the Inter-American Defense Board in Washington. In other words, for US Molina was the right candidate for presidency in Guatemala but he failed to win.

Alvaro Colom, the winner, makes the US officials nervous. He use to sympathize with the leftist insurgents, worked as an aide at the Secretariat of Peace, supported radical reforms and was known to approve Hugo Chavez`s policies in Venezuela.

The US Embassy officials know that despite his apparent indecisiveness, Colom may suddenly launch any populist-like campaigns. Isn't this enough for the CIA to begin eavesdropping? It is remarkable that Colom himself felt he had been watched and something wrong was with his circles: there were some information leaks, and the issues discussed during confidential talks were reported to alien people. The pieces of information were even covered in the media in order to disrupt the implementation of Colom`s plans.

The President asked Carlos Quintanilla, Director of the Secretary for Security and Administrative Affairs (SAAS, Spanish acronym) to find out how the secret information was leaked but the efforts were in vain. Colom trusted Quintanilla, who had worked as his closest ally for about 10 years, and financed not only his political campaigns but also his family's entertainment in Europe. Quintanilla studied at the military academy but decided not to dedicate himself to the army. He graduated from the George Washington University, where he specialized in national security. Then he often met the US experts and was a frequent guest at the US Embassy in Guatemala City. In other words, Quintanilla was trying to influence Colom`s opinion. The question is whether he had his own interests there? In Guatemala Quintanilla is considered a rich person: he runs several horse- and cattle-breeding companies and is the head of the “Servicious de proteccion particular” security company, which has up to 700 patrol cars of the Mobile Military Police (Policia Militar Ambulante).Quintanilla also runs some other lucrative businesses. So his relationship with Colom, who twice ran for presidency and was not successful, points to some arrangements he had with the US Embassy officials.

After the Colom`s victory, Quintanilla became an influential person in the government. Many leaders of the national law-enforcement and security agencies were appointed by the President after his consultations with Quintanilla, who discussed the candidates at the US Embassy.

The eavesdropping scandal broke soon after the arrival of the US ambassador Stephen McFarland to Guatemala. And that was he who took the major blow. McFarland received such a high post for the first time in his 30-year diplomatic career. Before he used to work in a US consulate in the city of Maracaibo (Venezuela), and worked in the US embassies in Ecuador, Peru, Bolivia and Salvador. As a representative of the US State Department, McFarland observed the political processes in Nicaragua and in Cuba. He served as Chargé d’Affaires in Paraguay and recently in Venezuela, where the Bolivarian propagandists said McFarland “was not the one he pretended to be”. McFarland's biography is also full of military episodes. He studied at the US Air Forces College and the Marine courses. In 2007 he visited Iraq as the head of the US military-civilian team on Iraq reconstruction, which operated under cover of the Marine Unit number 2. McFarland had a solemn farewell dinner at the State Department before leaving for Guatemala. John Negroponte, first Deputy Secretary of State, who until recently has used to be an omnipotent chief of the US national intelligence, also took part in the ceremony.

McFarland publicly commented on the espionage scandal: “This is a complete failure of the Secretary for Security and Administrative Affairs (SAAS). And if asked, we are ready to do our best to name the guilty”. Now the FBI agents are working in Guatemala. The situation makes us think that a mafia case may be viewed as the only possible since the President insists on it. Such kind of an “arrangement” suits both the sides. If a CIA trace becomes evident, a shadow of the rebuking Jacobo Arbenz will return from the distanced 1950s, and the reaction of the Guatemala people will affect the US interests there and on the whole Latin American continent.

In the meantime the President's “security chief” Quintanilla and his right-hand man Gustavo Solano are in hiding. Some people say they managed to move to Mexico, others say they were killed. Rumors are not the best source of information to rely on, you know...

Other presidents of Latin America and members of their families are also under close watch. Microphones and spy cams are hunting for secret and also damaging information. The process is usually said to be effective even if the goal is not achieved. The CIA practice shows that the mixture of lie and truth have a necessary information effect. That is how they used a mythical laptop, which belonged to the dead Commander of the Revolutionary Armed Forces of Columbia (FARC) Raul Reyes. The laptop was allegedly found by the US and Columbian forces in the destroyed FARC camp in Ecuador. The computer's files contained the ''evidence'' of Venezuelan and Ecuadorian Presidents` relations with the guerrillas. It turned out that Hugo Chavez and Rafael Correa “supplied arms to the FARC and thus supported terrorism on the continent”. The laptop allegedly saved some illustrated reports about the meetings between the guerrilla leaders. The fake of the highest quality made by a group of experienced specialists.

Over the past 2 years the presidents of Columbia, Bolivia, Ecuador, Paraguay and Venezuela have felt what it was like to be under close watch. The espionage scandal in Guatemala was much spoken about in all presidential residences of Latin America. The security services are busy inspecting all the corners for microphones and cameras. That's really a difficult job to do since only the Princess from Hans Christian Andersen's story could felt the pea right through the twenty mattresses and the twenty eider-down beds.