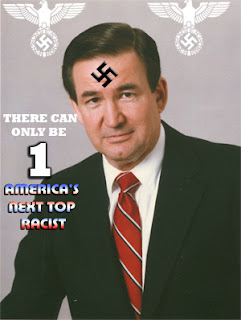 Pat Buchanan has often posed something of a problem for MSNBC. He's a frequent contributor on the network, and he does, after all, have a long history of extremely controversial positions, like writing of AIDS in the early 1980's, "The poor homosexuals -- They have declared war against nature, and nature is exacting an awful retribution."

For the most part, though, MSNBC has looked the other way when it comes to Buchanan. A column he wrote in which he appears pretty sympathetic to Adolf Hitler, though, might have been the last straw -- at least for MSNBC.com.

In the piece, which was reprinted on MSNBC.com and caused a fair amount of controversy, Buchanan wrote:

[I]f Hitler was out to conquer the world ... Why did he let the British army go at Dunkirk?

Why did he offer the British peace, twice, after Poland fell, and again after France fell? ....

Because Hitler wanted to end the war in 1940, almost two years before the trains began to roll to the camps ....

Indeed, why would he want war when, by 1939, he was surrounded by allied, friendly or neutral neighbors, save France. And he had written off Alsace, because reconquering Alsace meant war with France, and that meant war with Britain, whose empire he admired and whom he had always sought as an ally.

As of March 1939, Hitler did not even have a border with Russia. How then could he invade Russia?

Winston Churchill was right when he called it “The Unnecessary War” — the war that may yet prove the mortal blow to our civilization.

The column has now been removed from MSNBC's Web site. A spokesperson gave Politico an explanatory statement that says, "An editorial decision was made to remove the column from msnbc.com. Pat is a contributor to MSNBC, his syndicated column does not speak for the network or represent the views of MSNBC."
Posted by Alex Constantine at Sunday, December 06, 2009