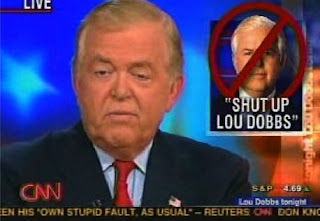 Is CNBC prepared to Invest in Dobbs and His Record of Conspiracy Theories and Inflammatory Rhetoric?
Media Matters | December 01, 2009

A December 1 New York Times blog post reported that Lou Dobbs "has held talks with the business news network CNBC in recent weeks" and that he "could conceivably host a prime time program for CNBC" or "become a commentator for the business news network." Given Dobbs' record of promoting baseless conspiracy theories and engaging in inflammatory rhetoric, Media Matters for America questions why CNBC would want to tarnish its brand -- as CNN did -- by hiring him.

Lou Dobbs, who is likely to make a decision about his post-CNN career this month, has held talks with the business news network CNBC in recent weeks, two people with knowledge of the discussions say.

Mr. Dobbs, a free agent whose exit from CNN last month prompted speculation about plans for a political bid, could conceivably host a prime time program for CNBC. He could also become a commentator for the business news network.

The people who spoke about the talks requested anonymity because they were not authorized by their employers to speak about it. [The New York Times' Media Decoder, 12/1/09]

Is this the kind of brand CNBC wants to be associated with?

As Media Matters extensively documented, Dobbs suggested on his July 15 CNN show that the birth certificate President Obama provided to FactCheck.org was not "the real document" and suggested on his radio show that day that it was not "the real deal." After asking if Obama should be "more forthcoming" about his birth certificate, Dobbs added: "One of our callers, by the way, pointed out that he didn't release -- he didn't release his medical records, either. Now isn't that interesting? And hasn't produced some other documents. What's the deal? What is the deal here? I'm starting to think we have a -- we have a document issue. Do you suppose he's un -- no, I won't even use the word undocumented. It wouldn't be right." On his July 21 radio show, Dobbs faulted "certain quarters of the national liberal media" for "absolutely trying to knock down the issue of President Obama's birth certificate." On his July 23 radio show, Dobbs addressed media reports on his conspiracy theories by declaring, "I do believe in a national left-wing media conspiracy in which they work in concert and attack like hell."

Dobbs used CNN to elevate wild conspiracy theories and legitimize hate groups. The notion that Obama was born outside the United States wasn't the first outrageous theory that Dobbs promoted on CNN. As Media Matters documented, Dobbs has repeatedly accused the U.S. government of secretly plotting with the governments of Mexico and Canada to merge the three countries into a "North American Union" -- a charge his own CNN colleagues labeled a "conspiracy theor[y]." Dobbs has promoted the smear that Mexican immigrants are conspiring to reclaim the Southwest for Mexico and at one point illustrated this theory by using a graphic sourced to the Council of Conservative Citizens, a hate group that "oppose[s] all efforts to mix the races of mankind." Dobbs famously aired a false report about a purported spike in leprosy cases linked to illegal immigration and repeatedly defended his show's reporting even after it had been proven wrong.

Dobbs had close ties to "hate group" FAIR. In September, Dobbs helped lead the annual "Hold Their Feet to the Fire" radio host rally organized by the Federation for American Immigration Reform (FAIR) -- an organization the Southern Poverty Law Center has designated a "hate group." On August 28, Media Matters president Eric Burns wrote an open letter to CNN president Jonathan Klein urging him to prohibit Dobbs from participating in the FAIR event. Media Matters also documented that Dobbs used his CNN show to report on the FAIR rally without disclosing during those reports that he was helping lead it. A year earlier, Dobbs had broadcast his CNN show from the FAIR rally. In addition, the group has given Dobbs an award for "his continued efforts in leading the immigration reform movement through both his talk radio show and his television show." In the past year, Dobbs has cited FAIR as a credible source on immigration issues at least six times and has routinely failed to disclose his close association with the group.

Dobbs declared, "Mexico has become our enemy." As Media Matters documented, Dobbs complained on his March 3 radio show that there are people "trying to control our political agendas" and "social agendas with political correctness, trying to control thought, and, of course, speech through political correctness." He added that while it may be "politically incorrect," it is "absolutely factually correct" that "Mexico has become our enemy."