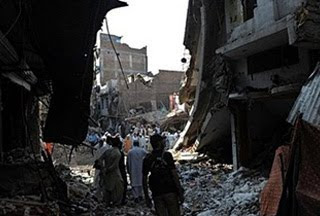 "Karachi - Contrary to the claim and media reports about Tehreek-i-Taliban Pakistan taking responsibility [for] the Ashura bomb blast, Mufti Mohammed Rafi Usmani held US agency Blackwater responsible for the gory incident that claimed more than 40 lives."

The Mufti's observation about the source of the blast is borne out by other stories in the world press. Compare the "Taliban claim of responsibility," as reported worldwide, with this from today's Islami Davet: "Hakimullah Mehsud, head of the Tehrik-e-Taliban, said Blackwater and some Pakistani agencies were involved in the bomb explosion at a crowded market in Peshawar." The International News story continues:

Addressing a news conference along with Muhammed Taqi, Mufti Muhammed Naeem, Maulana Tanver-ul-Haq and others on Wednesday, Mufti Usmani said that Blackwater was involved in the killing of innocent people in the Muharram procession.

He said that soon after the blast, shops in the city’s economic hub were set ablaze which proved that the attack was “pre-planned and organized”.

Mufti Usmani said that the incident was a conspiracy against Islam and the government totally failed to control the situation, as it was the responsibility of the government to provide security to the citizens and to protect the property. He said that the terrorism act was not committed by any Muslim and instead it was the act of Blackwater that had hired locals to unleash terror in the city.

He alleged that Blackwater was hiring youths in Peshawar to carry out attacks and suicide bombings.

Mufti Usmai said that no person could carry weapons or other destructive items with him on occasions of religious processions and the incident was an attack on the country’s sovereignty.

“By the grace of God we achieved the country, but we do not take care of it. It is not only weaknesses of successive governments but also of the people who are the least bothered about taking care of their country,” he said.

The government, he said, must stop taking dictation from the US and form its own policies. Mufti Usmani demanded that immediate measures should be taken to compensate the affected traders of Boulton Market, Light House and other affected areas.

He also demanded conducting an independent inquiry into the incident and exposing those involved in the heinous crime.

Meanwhile, the Sunni Ittehad Council condemned the attack on the Ashura procession.

Addressing a press conference, Sahibzada Fazal Karim said that the attack on the procession was a conspiracy to destabilise the country.

He also supported the strike call given by the Sunni Rahber Council for Friday.

Meanwhile, the Sunni Tehreek (ST) in a separate press conference also endorsed the Friday strike call and announced to hold a protest rally in the city on Saturday. ST leader Shakil Qadri said that protest rallies would also be held in other parts of the country. 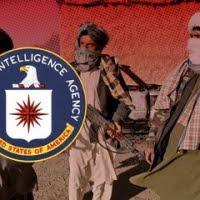 Two of the seven CIA personnel killed in last week's suicide bombing in Afghanistan worked as contractors for the company formerly known as Blackwater, but what role Dane Paresi and Jeremy Wise played at the CIA's forward base in Khost remains unknown. The base collected intelligence used in the CIA's drone attacks across the border in Pakistan, but CIA director Leon Panetta has said that the former Blackwater, now known as Xe Services, is no longer involved in the drone program.

Spokesman for both the CIA and Xe/Blackwater declined to comment whether Paresi and Wise were employed through Xe, but two private intelligence sources and one current government official familiar with CIA operations at the Afghanistan base confirmed to ABCNEws.com that the two were there as Xe employees. A source familiar with Xe's contracts said that their role was not to provide security for the base, but provided no further details.

Paresi and Wise were both former elite military commandos, and were killed when a Jordanian double agent detonated a suicide bomb at a meeting inside the CIA base near the Pakistan border. Wise was a 35-year-old former Navy SEAL from Virginia Beach, Va. A statement from the family of the 46-year-old Dane Paresi described him as having recently retired from 27 years in the Army, many in Special Operations. He was from Portland, Ore.