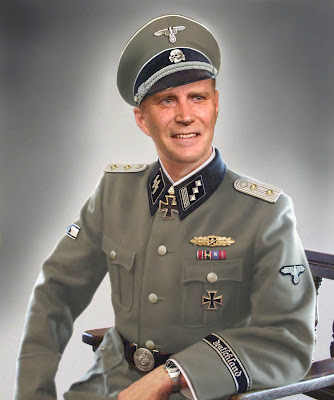 As a student initiation draws condemnation of binge drinking, but silence over its fascist overtones, The Journal finds out how easy it is to acquire a Nazi unform for fun, and if its right that we can

Both the news coverage of recent events at the University of Gloucestershire and the press statement released by the college in response ignored the presence of an elephant in their midst. The former only noted in passing the Nazi overtones of the initiation ceremony; the latter, reflecting the considerable embarrasment already being felt, didn’t mention it at all.

If there is diminished sensitivity about Nazi imagery used as a subject of fun, it hasn’t yet reached the Edinburgh fancy dress market. Only one of the Edinburgh costume shops listed in the online yellow pages stocks Nazi uniforms, and when told that it was going to be worn on a stag-do pub crawl, was unwilling to rent it out.

“We have a couple of Nazi outfits, for when we do The Sound of Music, but I’d be wary of letting you have it to go out in.

“It’s just that when we rent to people who wear it to go to the pub, they sometimes get attacked,” the lady from Macmillan Stage told me, adding that two clients who had gone for a Third Reich-themed piss-up had suffered just that fate.

“People can get quite offended by it – and anyway, we don’t have any Nazis in your size,” she said, obliquely confirming the stereotype about short men being aggressively addicted to symbols of power. The awkwardness with which many of the store attendants reacted to the request seems to suggest a significant level of discomfort with the matter.

“Yeah, we don’t have anything like that,” sighs the girl behind the counter at Armstrongs, Edinburgh’s best known vintage clothing emporium. “A lot of people come in asking for that sort of thing, and I tell them what I’m telling you – no.” She’s dripping in studs, chains and dark eye makeup—to say nothing of disdain—and one can’t help but wonder what a hardened Goth like her could find wrong in the innocent request for an SS uniform to wear to a birthday party.

Contrary to the notion that Nazi imagery inhabits a moral grey area, the line between what’s acceptable and what isn’t is at times unmistakably clear. “We’ve got a black German WWII uniform, an SS-style kind of thing,” says the man at Monkey Business over the phone. For £30 it could be mine – but am I getting my money's worth?

“Of course it doesn’t have any swastikas; that would be offensive.”

Then again, sometimes that line is non-existant. The store clerk at Fairy Funny, a fancy-dress store in Glasgow, has to check whether their only Nazi uniform is available on the date of my ficitonal pub crawl; whether this is standard policy or a reflection of west coast taste in party wear remains unclear. What is certain is that, with a price tag of £35, the search is over: “It comes with trousers, shirt, tie, hat and jacket, with a red swastika armband on it – you could do yourself a little moustache with a marker pen, as well!”

There is, of course, legitimate historical interest in German World War Two memorabilia. “There is a very large market for Third Reich antiques,” Craig Gottlieb, a Florida-based collector and trader of Nazi militaria, told The Journal.

“I only sell original antiques. There is a great demand for reproductions, but I find that to sell them without historical context reduces the business to a purely economic pursuit. I see myself as a preserver of history, and for me, modern products seem to glorify the subject matter, which I do not wish to do.”

Mr Gottlieb, who sources his items mainly from families of Allied soldiers who returned with them as trophies, is steadfast in the defence of his trade and its social value. “In my view, this holocaust is too often presented out of context... by studying the trappings of military regalia, we can more effectively answer the question we always ask: ‘How could the Holocaust happen in a civilized society?’

“For me, military antiques illustrate exactly how Hitler and his lieutenants assembled a team of civilized Germans to commit what is now known as genocide, in so short a period of time. Within the SS, Himmler capitalized on a universal need for human beings to feel part of a group, to be a member of an inner-circle of elites. This universal human need explains what makes otherwise normal men do very bad things.”

Mr Gottlieb’s sentiments are echoed by "Alex", who helps run Panzergrenadier, an Axis historical re-enactment online community. “My re-enactment group do infantrymen of the 272nd Division,” he told The Journal. “They didn’t have cuff-titles and the ear of Hitler. They were school-teachers, draftsmen. They were bricklayers and factory workers. They were called up in 1944 to fight a rich man’s war on a global political stage not of their making or choice.

“Our stand-first is that an ordinary German soldier had much more in common with an ordinary British soldier than he had with a German officer.”

Though the benefits of keeping a place for Nazi imagery in society are clear, it is - as in the Gloucestershire case - open to abuse. “The simple wearing of a swastika isn’t enough to be considered a hate crime,” explains inspector Tom Galbraith of the Safer Communities Department of the Lothian and Borders Police. “The reported event has to be taken into context, and often there isn’t enough evidence to bring a prosecution.

“In the event of someone wearing a Nazi emblem for entertainment, the most likely police reaction would be to charge them with breach of the peace, if applicable. But the way the law is framed requires a complaint for any action to be taken.”

That no complaint was made in Gloucestershire invites the question: rightly or wrongly, have we become desensitized to Nazi imagery?

Leslie Bunder, editor of the online Jewish community forum SomethingJewish, clearly believes so. “I’m not offended – are you?

“Maybe if they were neo-Nazis at some sort of gathering, that would be offensive; but if it’s done for comedy, or humour, then there isn’t really any problem,” he said. “If it’s done as some sort of prank, then some might find it funny, some might not. There isn’t any reason why it should be inherently offensive. Are you offended by Mel Brooks' The Producers, or 'Allo 'Allo?

“If you’re looking for some Jew to say, ‘Oh, I’m so offended, that’s appalling,’ then you’re going to be disappointed. Why not ask a homosexual, or a disabled person? Hitler killed millions of disabled people; why don’t you ask one of them?”

Insisting that “there isn’t a story here” and that to ask for a Jewish perspective on the potential offense of wearing Nazi emblems in jest was “lazy,” Mr Bunder concluded: “Things have changed since World War Two. People don’t get worked up about this anymore.”

Inspector Galbraith disagrees: “I’ve worked with the Edinburgh Hebrew Congregation on Salisbury Street in relation to racist incidents, and there are clearly historical issues at work here which aren’t going away.

"If by wearing Nazi imagery someone were glorifying that part of the past, then that would likely be considered offensive in law."

Student initiations are the subject of renewed debate after a group of students at the University of Gloucestershire were filmed performing a drinking "ceremony" with Nazi overtones.

Chivvied along by a student in Nazi uniform, the group were marched along a residential street with plastic carrier bags over their heads and forced to drink, stopping occasionally to be sick.

The video was taken in secret by another student during freshers' week in 2007, and sent in to the BBC on 2 October.

An investigation has been launched by the universities, where initiation rites featuring “bullying and intimidation” are banned.

In a statement, Paul Drake, director of communications for the University of Gloucestershire, said: “The university takes the issue of intimidation and bullying extremely seriously.

“Disciplinary action may be brought against those who are found to be leading initiation ceremonies and who continue to perpetuate unacceptable intimidatory and coercive practices, in line with the university’s student charter.

“This particular incident illustrates that we have more to do to eliminate poor student behaviour. It should be remembered however that this represents a small minority.”

Students’ union president, James Durant added: “We go to great lengths to ensure our sports captains understand that initiation events that include intimidating or bullying behaviour will not be tolerated."

His sentiments were echoed by NUS president, Wes Streeting who told BBC News: "We are totally opposed to student initiations. They put students at serious risk and exclude students who don't want to take part in that binge-drinking culture."

At the beginning of the 2007-08 academic year, Edinburgh University RFC managed to close a significant part of the Three Sisters, one of Scotland's largest pubs, after their fancy-dress induction for new recruits resulted in two toilets, the dancefloor and one of the pub’s three bars being sprayed with vomit, owing largely to the practice of "salting" each other's pints.