Sacrificing the Jews for Christianity 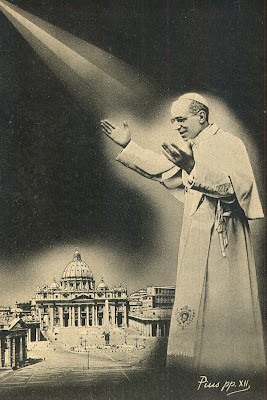 " ... At the onset of the present discussion, the Vatican claimed that Pius XII did not know about the Nazis' mass murder of the Jews. When this was proved false, and it was shown that the Pope was well aware of the Jews' sufferings, the Vatican then claimed that the thousands of Jews who had been saved after being hidden in monasteries in Rome in 1943-44 could only have survived as a result of a direct order from Pius XII. But with the exception of a bishop in Assisi, no priest has ever claimed to have acted upon instructions from Pius XII. ... "

The Catholic Church's decisions regarding the beatification of its saints should not concern the Jews. One exception to this rule is the case of Pope Pius XII, who headed the Church while the Holocaust was ravaging World War II Europe.

What is at stake here is the Catholic perception of the Shoah - the worst nightmare in Jewish history, during which six million of our people were murdered. For Catholics, according to Pius XII (who reigned 1939-1958), it was a period during which the Church was a victim of Nazism. In a blatant effort to Christianize the Holocaust, Pope John Paul II used the symbol of the "six million" to represent the number of Polish people allegedly killed during the war. Edith Stein, although killed in Auschwitz as a Jew, was canonized by the Church as one of its martyrs. Auschwitz was defined by the same pope as "the Golgotha of the modern world," yet another expression of the Church's appropriation of the Shoah.

Golgotha, of course, is the hill in Jerusalem where a Jew was crucified, giving birth to Christianity. Did Auschwitz, to the Pope's mind, represent the sacrifice of the Jews for a renewed strengthening of Christianity? The beatification of Pius XII follows such a line of thought, and may well be the last testament of John Paul II, who wanted to transform the Jewish Holocaust into a Polish Catholic event.

John Paul's successor, Pope Benedict XVI, repeated his predecessor's expression when he visited Auschwitz on May 28, 2006, although three days later, back at the Vatican, he corrected his own words, and said that it was six million Jews who were killed in Auschwitz.

At the onset of the present discussion, the Vatican claimed that Pius XII did not know about the Nazis' mass murder of the Jews. When this was proved false, and it was shown that the Pope was well aware of the Jews' sufferings, the Vatican then claimed that the thousands of Jews who had been saved after being hidden in monasteries in Rome in 1943-44 could only have survived as a result of a direct order from Pius XII. But with the exception of a bishop in Assisi, no priest has ever claimed to have acted upon instructions from Pius XII. We must therefore conclude that these churchmen sheltered the Jews mainly for religious or humanitarian reasons, which were dictated by their own consciences.

Pius XII was mainly a diplomat, and he had no pastoral experience. The professional approach of a diplomat is to believe that complicated issues can be solved by a "note verbale," a diplomatic letter. Hence, the Holy See sent a note to the Slovakian Legation deploring the regulations against people guilty only of belonging "to a particular race," but to no avail. No other action was taken, though, such as, for example, issuing a threat of excommunication against the Slovakian president, Monsignor Jozef Tiso. No public statement condemning the deportation of the Slovakian Jews was ever issued by the Vatican, and only such a statement could have impressed the leaders of some European countries.

We do not need to wait for the opening of Vatican archives to know that never, neither during World War II nor afterward, did Pius XII call the Jews by their name. They were generally described as those "poor people" who suffer because of their national origin or race.

A few years ago, in response to the initial announcement of the candidacy of Pius XII for sainthood, I published, in a professional journal in Italy, a historical essay on the Pope and the Jews of Rome. On October 16, 1943, the Nazis rounded up about 1,200 Jews from their apartments there, and sent 1,024 of them to Auschwitz. All but 15 of them were killed.

As I demonstrate in my study, an ongoing negotiation took place at the same time, between the Nazi government, through its ambassador to the Holy See, Ernst von Weizsacker, and the Pope. The German foreign minister, Joachim von Ribbentrop, agreed to recognize "the neutrality of the Vatican," in exchange for a declaration from the Holy See regarding the "good behavior" of the German troops in Rome. On October 29-30, the Vatican's semi-official daily Osservatore Romano published a front page article stating that, "the German troops have respected the Roman Curia as well as the Vatican City." Was the deportation of the Jews the price for the liberty of the Vatican?

Three days after the deportation, on October 19, Pope Pius XII received the diplomatic representative of the United States, Harold H. Tittman, Jr. The only subject raised by the Pope was the defense of Rome against eventual communist attacks. Not only did the Vatican refrain from taking a public stand decrying the murder of the Jews during the war, but even after the end of hostilities, when the Nazi danger had disappeared, the Vatican saw fit to actively assist former war criminals, such as members of the Croatian units of Ustasha and their leader Ante Pavelic, in emigrating to safe haven in Argentina. After the war, the Jews asked Pius XII to return to their families Jewish children who had been hiding in Catholic institutions, even if their parents were dead. The Vatican's response to this demand was to send an order to Nuncio Roncalli (later Pope John XXIII), then in Paris, ordering him not to give back children who had been baptized during the war without their parents' knowledge or consent.

The Jesuit priest John F. Morley concluded his 1980 book, "Vatican Diplomacy and the Jews During the Holocaust, 1939-1943," with the words: "It must be concluded that the Vatican diplomacy failed the Jews during the Holocaust by not doing all that was possible for it to do on their behalf. It also failed itself because in neglecting the needs of the Jews, and pursuing a goal of reserve rather than humanitarian concern, it betrayed the ideals that it had set for itself." I could not agree more.

Sergio I. Minerbi, a former Israeli ambassador, has been a visiting professor of political sciences at the University of Haifa.