The world is only 6,000 years old, and it is actually cooling, not warming. Devastating hurricanes are God's statement on homosexuality. The founders were theocratic "Christians." GW Bush was a good president. The war in Iraq was a justifiable response to 9/11. Dennis Miller is amusing. Health care is an "evil" liberal plot to advance "eugenics." Opposition to illegal military quagmires is "unpatriotic." Nancy Pelosi lied, not the CIA. Torture is "harsh." All we hear are the socialist bleatings of the media. The country is ruled by a closet Kenyan voted into power by treasonous "Nazi" liberals - feminists, environmentalists, gays, Ted Kennedy.

The country is going to the dogs, a crazed, draconian, godless hell-hole where decent, set-upon, armed European-Americans struggle against the tyranny of Affirmative Action.

Good, sensible "conservatives" are fighting back against impossible odds to restore a sense of reality to American politics: 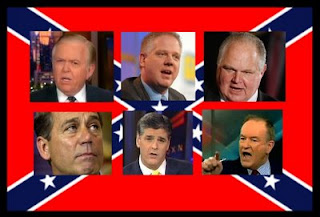 The 21st century opened with a handful of Supreme Court puppets appointing George W. Bush president after he lost the popular vote...

You can quibble with my use of "puppets," of course, and you can make an argument (which I don't agree with) that Bush deserved to be appointed president despite losing the popular vote because he (supposedly) won the Electoral College vote -- but it is a verifiable fact that George W. Bush lost the national popular vote, and it is a verifiable fact that after losing the national popular vote the Supreme Court appointed him president.

This is why I'm really perplexed that I continue to receive a steady stream of email from right-wing readers of my column who insist that it's a liberal conspiracy theory to state this verifiable fact. I'm not kidding -- I'm not just getting one or two emails, I have been getting scores of emails from people who are adamant that it's inaccurate, untruthful and treasonous to say Bush lost the popular vote. And what makes the screeds particularly strange is that the emailers do not offer an alternate theory -- say, a theory insisting the election was miscounted. No, there are actually people in the United States who lived through the 2000 election who seriously believe that Bush simply won the popular vote as it stands, that everyone obviously knows that supposed self-evident truism, and that anyone who says otherwise is crazy. ...