Excerpt: Boycotting Big Beer - Why We Should All Shun Union-Busting Beer Companies
By BENJAMIN DANGL
http://www.counterpunch.org/dangl08112009.html 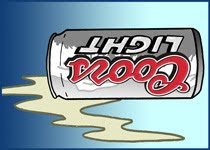 Over the years the Coors family has contributed handsomely to plenty of conservative projects and organizations. Reading about their family’s philanthropy is like reading a history of the right wing in America.

Joseph Coors was an advisor to Ronald Reagan, provided the founding grant to the infamous Heritage Foundation as well as the right wing Free Congress Foundation, which asks the following question on its website: “Will America return to the culture that made it great, our traditional, Judeo-Christian, Western culture?” If not, the US will, revert to “no less than a third world country.”

Joseph Coors really put his money where his right wing heart was when he donated a $65,000 plane to the Contras in the covert US war against the Nicaraguan Sandinistas in the 1980s. It’s high time to raise a glass of non-Coors beer in solidarity with the Sandinistas. But here’s another reason to boycott America’s most successful brewing company; their union busting.

In 1977, in Colorado, home to the company’s brewery, Coors hired scabs to replace workers on strike at the plant. Jeff Coors, the president of the family company at the time, told the Los Angeles Times that he wouldn’t back down because agreeing to union demands was like “inviting the Russians in to take over America.”

But the family’s repression of workers’ rights didn’t stop there. Annika Carlson writing about the Coors’ legacy at Campus Progress, says, “Until 1986, prospective Coors employees were sometimes required to take lie detector tests, answering questions about their sexual orientation, communist leanings, and how often they changed their underwear.”

In 2004, when Peter Coors, the chairman of the Coors Brewing Company ran for Senate as a Republican from Colorado, local union leaders were quick to criticize the company’s poor labor relations. Steve Adams, the president of the Colorado AFL-CIO at the time, told USA Today, "Peter Coors is a Republican, and there are very few Republicans who support workers' rights. The Coors company track record is not friendly to workers' rights." To this day, many of Denver’s 23,000 Food and Commercial Workers union still boycott Coors beer due to the company’s crackdowns on labor rights in the 1970s.

You can show that drinking is a very political act by turning your back on the big breweries. Or, as Carlson says about Coors, “When cracking open a cold one, remember to toast the things that make the Coors family great: union-busting, lie-detecting, Heritage-funding, double-talking and, of course, its beer.”

Benjamin Dangl is currently based in Paraguay and is the author of "The Price of Fire: Resource Wars and Social Movements in Bolivia" (AK Press). He edits UpsideDownWorld.org, a website on activism and politics in Latin America, and TowardFreedom.com, a progressive perspective on world events. Email: Bendangl(at)gmail(dot)com.
Posted by Alex Constantine at Sunday, August 23, 2009