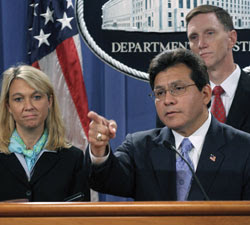 THE SAME day President Barack Obama reached out to 1.5 billion Muslims around the world in his speech to the Turkish parliament, saying the United States “is not and will never be at war with Islam,” Muslim Americans described what looks like a war on their community here at home. The American Muslim Taskforce (AMT) on Civil Rights and Elections, a coalition of major national Islamic organizations, discussed their concerns at a briefing at the National Press Club on April 6.

“This is a very important message to the American people, to the West and to the Muslim world in general,” said Nihad Awad, executive director of the Council on American-Islamic Relations (CAIR). “We appreciate Obama’s efforts to bring peace and justice to the Muslim world, and American Muslims are not only willing but they are ready to help,” he stated.

Obama needs to improve Washington’s relations with 6 to 7 million American Muslims—relations badly damaged in the previous administration’s “war on terror” and by its invasion of two Muslim countries.

“We support and we do encourage the president to reach out to the Muslim world,” added Mahdi Bray, executive director of the Muslim American Society’s Freedom Foundation, “but as my grandmother used to say, charity begins at home.”

During the presidential campaign Obama visited numerous churches and synagogues, but never a mosque or Islamic Center. “We say, ‘yes he can’ visit a mosque here in America,” Bray said. If he did, he’d discover people who support his presidency and who are concerned about issues like health care, jobs, energy and education, Bray noted. In fact, according to post-election polls, 95 percent of eligible Muslims voters turned out to vote in 2008, and nearly 90 percent voted for Obama.

AMT chairman Dr. Agha Saeed cited provocative domestic practices and civil rights abuses which began during the Bush administration but which continue today. These abuses include mistreating Muslim activists, including Dr. Sami Al-Arian (see p. 58); labeling as “unindicted co-conspirators” such respected mainstream Muslim organizations as CAIR and the Islamic Society of North America in connection with trials of Muslim charities; and sending FBI agents and informants into mosques to spy on worshippers.

In one notorious case, the FBI hired convicted felon Craig Monteilh to spy on mosques in Orange County, California from early 2006 through late 2007. (While he was collecting thousands of dollars for his FBI work inside mosques, Monteilh conned two women he met at the gym out of nearly $150,000 in elaborate pharmaceutical scams.)

Ahmadullah Niazi, a 34-year-old Afghan immigrant, and another member of the Islamic Center in Irvine, CA, reported the con artist to the FBI in June 2007, claiming that Monteilh was espousing terrorist rhetoric and trying to draw them into a plot to blow up shopping malls and other buildings. When the FBI refused to investigate, Islamic Center leaders realized Monteilh must be an agent provocateur, and won a restraining order to prevent him from returning to the mosque.

An FBI agent allegedly told Niazi that the agency would make his life a “living hell” if he did not become an informant. Sure enough, the FBI arrested Niazi on Feb. 20 of this year and charged him with perjury and passport fraud. The following day Monteilh bragged to the Los Angeles Times that he was the paid informant who had helped nab Niazi.

Another recent FBI sting, which captured headlines and fueled Islamophobic fires across the country, involved the June 23, 2006 arrest of the “Liberty City Seven,” named for the poor, predominantly Haitian and African-American Miami suburb where the targeted men lived. Prosecutors accused the seven “radical African-American Muslims” of plotting to attack Chicago’s Sears Tower and other U.S. buildings. The defendants, who turned out to belong to a Moorish religion blending Christianity and Islam, said they thought they were tricking an al-Qaeda member into giving them $50,000. Defense lawyers portrayed the case as a FBI sting operation and the ensuing arrests as a play for publicity to highlight the government’s campaign against domestic terrorism.

The arrests were announced in Washington, DC at a press conference hosted by then-Attorney General Alberto Gonzales, giving them maximum news exposure. It took three trials, three juries and nearly three years, but on May 12 federal prosecutors finally succeeded in gaining convictions of five of the men.

What other elaborate sting operations are under way? Who else is providing special surveillance of Muslim Americans? In May 2006, seeking to allay fears of FBI spying in their community, 11 Muslim American leaders, mosques and local organizations filed a joint Freedom of Information Act (FOIA) request. They asked for all FBI records of the agency’s surveillance and investigations of themselves and other groups since January 2001. A year later the agency turned over only four pages of documents.

In 2007, the American Civil Liberties Union (ACLU) of Southern California filed a lawsuit on behalf of the Muslim-American leaders and groups who had made the FOIA request, seeking a court order that the FBI comply. Since then, the government has provided hundreds of heavily redacted pages of documents which show that the FBI has conducted surveillance on lawful First Amendment activities of Muslim Americans. The FBI documents describe Muslim fund-raising activities in support of earthquake relief, work for immigration reform, and public speeches advocating nonviolence at conferences and Muslim student meetings. On April 20, 2009 a federal judge ordered the FBI to release nearly 100 more documents that detail the bureau’s surveillance of Muslim leaders and organizations in Southern California.

Soon it may not just be FBI agents gone wild who are watching and reporting on the activities of Muslim Americans. Big Brother may also include private sector agencies, including health care workers, credit card and telephone companies, banks or meter maids, building inspectors, or postal workers and librarians who help compile information on American citizens for the government agencies.

Since 2006, the federal government and the Department of Homeland Security have helped states and major cities set up a network of some 58 “fusion centers.” These institutions were originally created to improve the sharing of “anti-terrorism intelligence” among various state, local and federal law enforcement agencies. Their mission has quickly expanded to include “the collection and analysis of information from law enforcement agencies, the private sector and the intelligence community” on “all crimes and all hazards.”

According to a 2007 ACLU report, these new fusion centers “raise very serious privacy issues at a time when new technology, government powers and zeal in the ‘war on terrorism’ are combining to threaten Americans’ privacy at an unprecedented level.”

According to a Texas fusion center’s “Prevention Awareness Bulletin” produced on Feb. 19, 2009, it is “imperative” that law enforcement officers report the activities of lobbying groups, Muslim civil rights organizations and anti-war protest groups in their areas. Also suspect are supporters of former Congress members and presidential candidates Cynthia McKinney and Bob Barr, peace activists and hip hop bands. According to its Web site, North Central Texas Fusion System bulletins are disseminated to thousands of people in more than a hundred different agencies.

A Missouri report says that law enforcement officers may be able to spot potential terrorists by their political bumper stickers, such as those for U.S. Rep. Ron Paul, or by their subversive literature. A 200-page Virginia fusion center report notes that terrorists are likely to use Twitter, podcasts and social networking sites as communication tools.

I’m not making up this stuff.

Critics, Muslim and non-Muslim alike, accuse the centers of collecting uncorroborated allegations and, on occasion, inaccurate and incomplete information on individuals and organizations. Anything might find its way into fusion center computers, including agenda-driven information supplied by hysterical Islamophobes or self-proclaimed terrorism experts like Steve Emerson, Daniel Pipes, Frank Gaffney, Joe Kaufman, or Alan Dershowitz. Are reports generated by think tanks like the Center for Security Policy, the Middle East Forum, the Israel Project, and Hudson Institute feeding fusion centers? Just who and what countries have access to fusion center computer systems?

This writer doesn’t want to offend the Department of Homeland Security, the FBI or even fusion centers (and end up with a hefty personal file). Washington Report staff appreciated being able to call on the FBI when our offices were broken into and a safe destroyed in November 2006. Staff also asked, and received, FBI help when we received a threatening e-mail during the recent AIPAC conference in Washington, DC.

However, most Americans believe authorities should stick to investigating criminal and violent activities, and not wage a war on Muslim Americans and others engaged in constitutionally protected civil rights advocacy and peaceful political activities. President Obama would be well advised to visit an American mosque and listen to the Muslims next door.