A "Deep Throat" Has Emerged in the Mike Connell Plane Crash 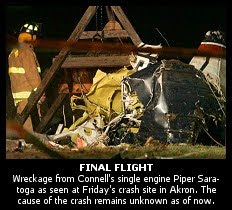 An anonymous informant has provided information indicating that an airplane piloted by Republican computer expert Mike Connell was sabotaged before it crashed on December 18, 2008, near Akron, Ohio.

One of Connell's sisters says she believes the family will file a wrongful-death lawsuit against Republican strategist Karl Rove if foul play ever is proven in the plane crash.

Those are two of the major revelations in a stunning recent investigative piece at BradBlog, by award-winning television producer and writer Rebecca Abrahams. ...