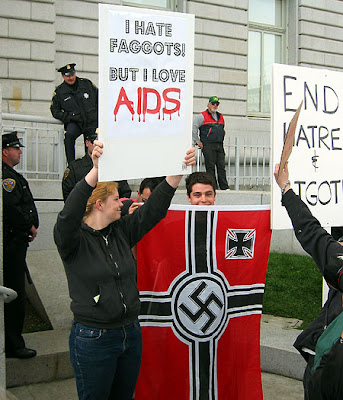 " ... Maybe the FBI really does need to put people like Hal Turner on its payroll. But at what point does paying for information simply turn into sponsorship of hate at the expense of a local community? ... "

It’s sometimes said that it takes a thief to catch a thief. That sort of calculus apparently pertains to paid informants in some of the scummiest corners of society.

The Record of Bergen County, N.J., has detailed a convoluted, unholy alliance between the FBI and Web radio hatemonger Hal Turner.

It’s an important relationship to Kingston.

Turner, a resident of North Bergen, N.J., was the organizer of a 2005 rally here intended to press law enforcement authorities to treat a black-on-white assault at Kingston High School as a hate crime. Local authorities said the facts of the incident did not support such a prosecution.

Turner managed to attract only 40 supporters — though, who knows how many of those might also have been informants, undercover cops or simple curiosity-seekers? — but the event put the city on tenterhooks and cost a pretty penny.

According to The Record, the FBI paid Turner thousands of dollars to feed the bureau information on white supremacists and neo-Nazis. The paper says the relationship between Turner and the FBI dates to 2003 and lasted until this year.

Turner is now being tried on charges he made Web death threats against federal judges in June. He was arrested three weeks later.

How much Turner was actually paid by the FBI is unclear, but The Record says FBI memos show the bureau had “as much as $100,000” at its disposal for his work as an informant.

In other words, a credible argument could be made that federal taxpayers underwrote Turner’s little star turn in Kingston as a traveling rabble rouser peddling racist nonsense.

In the end, the event cost city taxpayers $80,000, according to Mayor James Sottile.

But that’s not the half of it, really.

What community needs someone actively fanning the flames of racial hatred? It doesn’t take much for the wheels of everyday order and civility to come off when racial passions are aroused, especially among the more volatile elements of a community.

In that regard, it’s chastening to note that a facilitator in Turner’s little escapade was James Leshkevich, a white supremacist wingnut from West Hurley. Leshkevich claimed to have played a central role in attracting Turner to Kingston.

Three years later, Leshkevich strangled his wife with his bare hands before hanging himself. Did Turner respond to Leshkevich’s appeal because the FBI was interested in who the event might shake out of the bushes?

Even if the FBI had no role in the Kingston event, didn’t it effectively underwrite Turner’s agitation by having him on payroll?

Maybe the FBI really does need to put people like Hal Turner on its payroll. But at what point does paying for information simply turn into sponsorship of hate at the expense of a local community? And at what potential costs?

A remarkable American phenomenon is the popularity and financial success of ultraconservative commentators who rage on radio, television and the Internet.

Now, a national spotlight is shining on one of them: Hal Turner of New Jersey, who earned $15,000 a month by calling for lynching of blacks, assassination of President Obama and murder of judges who upheld a ban on pistols. He's on trial this week for the latter threat.

Incredibly, the FBI also paid Turner perhaps $100,000 as a secret informant about far-right extremist groups such as the neo-Nazi National Alliance, based in Pocahontas County. He came to West Virginia to meet leaders of the "hate group." The Bergen Record newspaper discovered his double life as an FBI snitch, and printed this report Sunday: 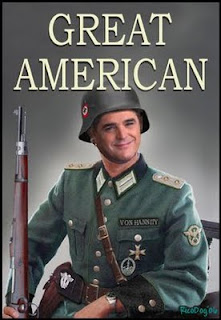 Turner, 47, is a former moving van worker who was arrested for cocaine addiction in Atlanta. Returning to New Jersey, he became a Republican activist and local campaign manager for presidential candidate Pat Buchanan. He was a regular caller to Sean Hannity's right-wing radio show, before Hannity moved to Fox News. Turner endlessly attacked abortion, immigrants and other conservative targets, "Tea Party" style.

After starting his own commentator show, Turner urged "a full day of violence against blacks ... lynchings, church-burnings, drive-by shootings and bombings to put these subhuman animals back in their place."

During the 2008 presidential campaign, he suggested the killing of Barack Obama: "It may be up to a sole person, acting alone, to make certain this guy is never allowed to hold the most powerful office in the world," he wrote on his Web site.

After three Chicago-based federal appeals judges upheld a ban on pistols, Turner wrote: "Let me be the first to say this plainly: These judges deserve to be killed. Their blood will replenish the tree of liberty." He posted photos of the judges, gave their office phone numbers, and included a map of their courthouse location. This action caused him to be arrested on charges of inciting murder.

While awaiting trial, Turner gave the Bergen Record large files of e-mails showing he had been employed by the FBI, supplying covert information about the National Alliance, Aryan Nations, skinheads and other extremists. The newspaper reported:

"FBI memos indicate that the bureau had appropriated as much as $100,000 for Turner's work as an informant." The FBI gave him a code name, "Valhalla." To gain inside information, the paper said, Turner attended a "National Alliance meeting in Elmwood Park [N.J.] and its leadership conference in West Virginia."

As a federal prosecutor, Chris Christie, now Republican governor-elect of New Jersey, allegedly gave Turner a letter promising that he wouldn't be charged. Christie refuses to discuss this allegation. ...