DEADLY DIVERSION: On Opium Trafficking, the CIA & the Challenger Disaster 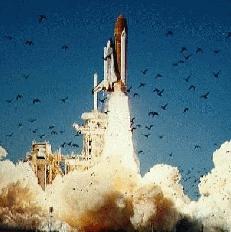 On January 28, 1986, Scott Barnes, a DEA contract agent, sat before the Senate Committee on Veterans' Affairs to testify about American opium smuggling from Southeast Asia. The chairman of the committee was Alan K. Simpson of Wyoming. Other notable nabobs on the committee: Strom Thrumond, George Mitchell, Jeremiah Denton, Alan Cranston and John D. Rockefeller.

Barnes flew in from Los Angeles to testify about the CIA and southeast Asian opium, an underground industry he'd discovered in his search for POWs in Vietnam. He passed lie detector and sodium amytal tests to convince the press ("calls and inimidations from news people escalated ... ") and filled out a sworn affidavit before testifying.

He also spoke to Congressman Solomon, who was "adamant." As an "ex-Marine," said Solomon, "I won't believe any of this."

"As the questioning progressed during my two hour testimony, I began to feel cornered," Barnes wrote. "I heard someone behind me whisper, 'Oh, God, NO!"

Barnes was given two hours to testify on the logistics of a covert postwar underground of military and intelligence officers engaged in the drug trade. He explained that some of them had been apprehended and were held captive in Southeast Asian prison camps.

Scott Barnes: "In the midst of my testimony, Brian Bonnet entered and whispered in the ear of Murkowski who immediately announced, 'Excuse me, I must go to the White House.' Not long after his return, he was interrupted again, then announced, 'I should advise you that unofficially we have had word that THE SPACE SHUTTLE CHALLENGER HAS BLOWN UP, and things do not look very good. I have nothing final on that but have just been advised that shortly after launching, there was an explosion. So if anybody wants to be excused, we will certainly understand.'" 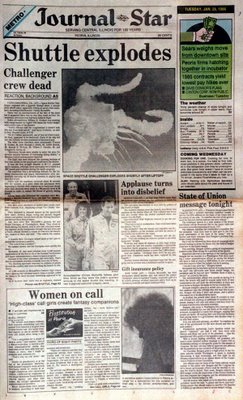 Barnes, shaken but determined to speak, resumed his testimony ... but "by that time most of the senators and media people had left."1

Moments before, he had addressed a full Congressional committee and a wall of reporters. If not for the Challenger explosion, his account of CIA drug smuggling – and the abandonment of downed pilots overseas – might have made it into public print.

The Challenger explosion was investigated by another "blue ribbon" commission, this one headed up by Nixon ally and Secretary of State William Pierce Rogers, an attorney with a keen professional interest in both the CIA and the heroin industry. 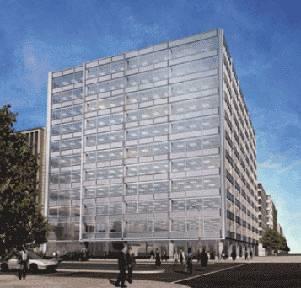 As background, this was culled this from the Lake Erie Reporter:

"Harken [Oil Co., owned by GHW Bush] was connected to the drug trade, the manipulation of foreign currencies and the CIA’s efforts to destabilize the government of Argentina. Harken’s major owners were George Soros, the Harvard [University] Management Corporation, and Abdullah Taha Bakhsh, a Saudi investor." 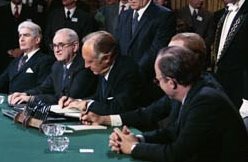 Bakhsh was legally represented by Rogers & Wells, the New York law firm of William P. Rogers. Bakhsh "arranged for Union des Banques Swisses, to invest $25 million in the firm. The Swiss bank was connected to the corrupt banking conglomerate BCCI, which collapsed amid scandal in 1992. BCCI has been called the most corrupt bank in modern times, having financed terrorists, drug dealers, and various covert operations."2

Rewind to 1986, Scott Barnes and his explosive Senate testimony. Recall that when he began to wade into detail in his brief to Senator Simpson's committee, someone seated directly behind him burst out in a whisper, "Oh, God, NO!"

Someone was very anxious about the politics of heroin in Southeast Asia. Who might that be?

Barnes: "The videos of the hearing show a very restless Ann Mills Griffiths seated directly behind me."

Ms. Griffiths was the head of the National League of Families, and though she was a vocal proponent of the POW issue, her many critics maintained that she frustrated efforts to resolve the MIA question behind the scenes.

In 1993, her name surfaced in connection with Richard Childress of the Reagan-Bush National Security Council, as reported by USA Today: "A Reagan administration official secretly funneled money from a POW-MIA group seeking information on missing Americans to help anti-communist rebels in Laos, a Senate report said Wednesday. Richard Childress, a National Security Council staffer, channeled the money during the early 1980s operation... Childress received about $200,000 working with Ann Mills Griffiths, head of the POW-MIA group, the National League of Families, and John LeBoutillier, a former New York Republican congressman.

"The operation 'sounds like a dry run' for the Iran-contra affair, said Jack Blum, a former Senate investigator. ...''3

The NSC's Dick Childress was another ne'er-do-well involved in the importation of heroin from Laos.4 And the Challenger explosion occurred at the very moment testimony about heroin smuggling was heard in Senate chambers.

Could this be a factor in the concurrent timing of the Challenger disaster? Political researcher Mae Brussell provided details of the launch and posited that the Challenger explosion was premeditated:

"Memorandum detailing a 'catastrophic' disaster if the shuttle was launched in less than 50 degrees Fahrenheit was presented to NASA in July 1985, and again in August 1985 by two different scientists. Did NASA, and the Pentagon, select the time when they demanded a lunch on the coldest day in shuttle history?

"The Challenger shuttle, unlike any other launch, waited outside in rain and cold for 38 days. Television cameras focused upon the ice coating and huge icicles at the time of the launch. Ice teams were sent out to 'check.'

"It was not always cold at Cape Canaveral. The Rogers Commission limited their public inquiry into launching decisions to the evening of January 27th and the morning of the 28th of January 1986. Plans for an earlier launch on Saturday, January 25th,
1986 were postponed because of dust storms in Africa and Morocco. It is interesting that the weather, so far away, was conveyed to the launch team at the top of the their pyramid. The same decision makers couldn't see ice, or feel freezing temperature around them at Cape Canaveral.

"It was not a matter of seeing or feeling the cold.... Challenger would leave on the morning of January 28, 1986. Weather was not a factor considered, then or now.

"Robert Lund, Vice President for Engineering at Morton Thiokol, the company who made the controversial solid fuel boosters, was told to "stop making an engineering decision." ... The other hat was military. Lund changed directions and took orders. Life is cheap for the Pentagon.

"Sunday turned out to be a fine day for a launch. Was there too much media competition with the Super bowl Sunday, with Reagan's 'teacher in space' production, after two years of publicity? The hundreds of press, teachers, and students waiting at Cape Canaveral, could have seen a fine launch on Sunday, Monday afternoon or even Tuesday afternoon when it was much
warmer.

"NASA officials had been alerted by Sunday that a cold front was coming in Monday night or Tuesday for sure. Indications were that weather was always a factor in safely launching a shuttle."5

It was "the coldest day in shuttle history," and yet Challenger launched... And Barnes returned to California, an obscure DEA contract agent completely unaware that had his testimony on the CIA and drugs had the potential of wiping out the prospects of two future occupiers of the Oval office, GHW Bush and son. At the very least, the CIA would have had its feet put to the fire one more time. And should the name "Childress" have emerged, the Iran-contra investigation would likely have focused on heroin, not hostages.
---------
NOTES