Hoover and the FBI 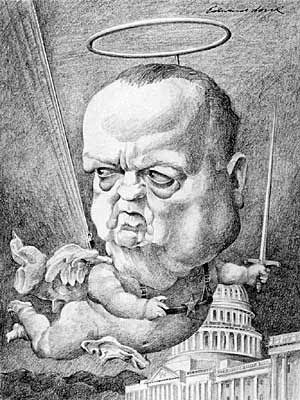 " ...President Harry S. Truman wrote a memo on J. Edgar Hoover back in 1945. It stated that the FBI was moving in the direction of a Gestapo or Secret Police. ... "

Located at 935 Pennsylvania Ave. NW stands a large modern building named after former FBI director J. Edgar Hoover who reigned over the FBI from 1924 until his death in 1972, for a grand total of 48 years. Congress has since placed a 10-year limit on directors of the FBI.

Senator Harry Reid and I want J. Edgar Hoover's name off that building, but Congress refuses. Obviously, I have no clout whatsoever with Congress. The senator said, and I quote, "J. Edgar Hoover's name on the FBI building is a stain on the building." Attorney General Laurence Silberman was a bit more harsh after discovering Hoover's secret files in 1974. "J. Edgar Hoover was like a sewer that collected dirt. I now believe he was the worst public servant in our history."

Even President Harry S. Truman wrote a memo on J. Edgar Hoover back in 1945. It stated that the FBI was moving in the direction of a Gestapo or Secret Police. He went on to say that the FBI was dabbling in sex life scandals and plain blackmail when they should be catching criminals. And finally, when President Nixon heard of Hoover's death, he said something so nasty I cannot repeat it here.

There can be no doubt that Hoover did a number of things that improved the FBI, so why all the controversy? During his lifetime, he was highly regarded by the general public, but also generated an army of enemies. It can all be summed up in the following statement: His critics asserted that he abused his power and exceeded the jurisdiction of the FBI. They also claim that he used the FBI to harass political dissenters and activists and amassed secret files on political leaders and used illegal methods to collect evidence.

Hoover was something of a prima donna. When FBI agent Melvin Purvis received substantial public recognition for his successful efforts to capture and break up gangs back in the 1930s, a jealous Hoover maneuvered him out of the FBI. ...