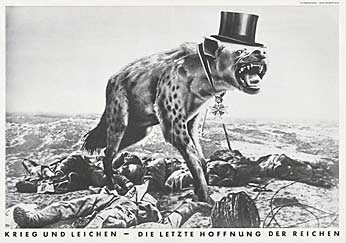 DOWNTOWN AKRON — Put on your reading glasses if you go to see John Heartfield vs. Nazi Germany, the newest exhibit at the Akron Art Museum (AAM), on display through Nov. 30.

The showing gathers together 40 Heartfield photomontages. Berlin native Heartfield, born Helmut Herzfeld, chose to change his name to an anglicized version, Heartfield, in protest of the 1916 German government and its over-the-top nationalist spirit, which was mingled with a decidedly anti-British bias. In keeping with his rebellious spirit, Herzfeld, now Heartfield, later took on more directly and through his art the rise of fascism and the Nazi regime.

The images presented in the exhibit span the period 1932-36, and thereby chronicle the right-leaning government that both took its wrath out on any group it considered politically or economically subversive (mostly communists and socialists of the day) and that prepared an easy path for the dictator and persecutor Adolph Hitler, who widened the net to include whole hosts of people he thought ruined the purity of Germans and German life — Jews, gays, gypsies, intellectuals, thinkers, Jehovah’s Witnesses and pacifists, among others. 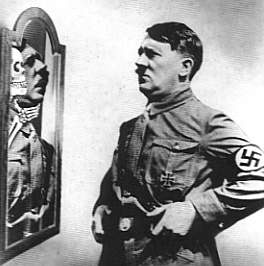 Heartfield’s photomontages are artistic, to be sure, but they were messages, too, that were brought to the public as warnings of the “storm” (that is, World War II and other untold loss of life) that he could foresee coming. To achieve his purpose, Heartfield wanted to get his works to a wide audience, and the illustrated news magazine AIZ (Arbeiter-Illustrierte-Zeitung, or Workers’ Illustrated Newspaper) was a perfect choice.

The didactics on the walls of AAM’s Fred and Laura Ruth Bidwell Gallery pile on information to bring meaning and context to Heartfield’s work. There are ready translations of the German text that appear on the montages, plus some historical context to explain events that were current when Heartfield created the pieces, along with interpretive information about the political subject being studied and additional images that reveal where and from whom Heartfield got the images he put together in his satirical presentations.

“Mit seinen Phrasen will er die Welt vergasen” (With his empty phrases he wants to gas the world) is on view in the Akron Art Museum’s John Heartfield vs. Nazi Germany exhibit. Photo courtesy of Akron Art Museum

All that can be a lot to take in. The text isn’t very large for reading, and there’s a good amount of it. It’s positioned beside a work or often a group of works (which can make it sometimes difficult to figure out how to match image and text, since one has to stand so close to the works). After reading, one can finally back away and take a look at the piece as the original audience might have seen it when scanning through the news magazine. Often, one needs to go back to the text to put it all together again. With only 40 works displayed, one needs to prepare to give some time to following through each of the works.

The effort can be worth it. Heartfield was indeed clever and certainly knew how to throw punches at authority, so much so that he constantly had to flee from city to city and eventually country to country. His skill at the art of photomontage is remarkable. Today, with the possibilities of computer programs like Photoshop, through which photomontages are somewhat faster to make happen, Heartfield had a much longer and involved process to complete. There are explanations of the art process in several places throughout the exhibit. 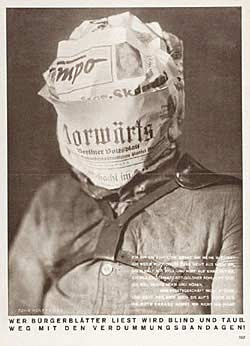 "Whoever Reads Bourgeois Newspapers Becomes Blind and Deaf: Away with These Stultifying Bandages!" Photomontage by John Heartfield, 1932.

Curators and exhibition designers Christopher Hoot, Barbara Tannenbaum (who is chief curator for AAM) and Joseph Walton advise that one go through the exhibit chronologically for it to have its greatest impact. That’s no doubt true, and markers for years (1932, 1933 and the like) are printed large enough on the walls to help visitors get their bearings.

Adult general admission to the museum (which includes entry to the current exhibit) is $7, with discounts for seniors and students at $5. Gallery hours are Tuesdays through Sundays from 11 a.m. to 5 p.m., with extended hours on Thursdays until 9 p.m. AAM is closed on Mondays.
•••
Roger Durbin is professor emeritus of bibliography at The University of Akron and an avid art enthusiast. To contact him, email r.durbin@sbcglobal.net.