Reinforcing the "Islamo-Fascism" Lie: 'Obsession' DVD is a Scare Tactic

" First shown on Fox News during the 2006 mid-term elections and on college campuses, the production shows a long series of unsubstantiated experts equating radical Muslim movements with the German Nazis. ... " 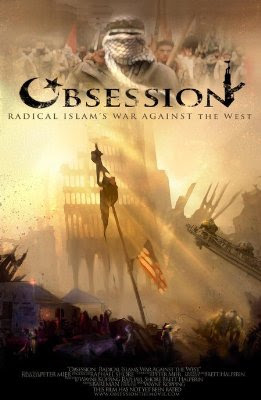 We received a copy of a right-wing terror propaganda DVD bundled into our Sept. 14 Sunday Register, Obsession: Radical Islam's War Against the West. I checked out the distributor, the Clarion Fund, and found that it is a New York-based group, an outfit that claims a 501c(3) nonprofit status despite an article recently on its Web site, since removed, that backed Republican presidential candidate John McCain.

We wondered when the scare tactics of the 2004 campaign would return. To coincide with Sept. 11, 28 million copies of the 60-minute film went out bundled with the ads in 70 newspapers in 14 swing states, including Iowa. First shown on Fox News during the 2006 mid-term elections and on college campuses, the production shows a long series of unsubstantiated experts equating radical Muslim movements with the German Nazis.

Despite two mild verbal disclaimers that not all Muslims are radical, there were two printed and verbal "quotes" about Muslim radicals planning to eventually occupy the White House. This is a not-so-subtle tie-in to the ideas behind the hate e-mail frequently passed along over the Internet this past year depicting Barack Obama as a Muslim, along with other supposedly despicable traits.

I would have thought the Register knew better than to pass along such drivel.

Distribution of the controversial Clarion Fund documentary is pegged to 9/11, not the presidential election, the group says. Some see a 1st Amendment issue.

By DeeDee Correll, Special to The Times
September 28, 2008

Millions of copies of Obsession: Radical Islam's War Against the West were delivered over the last few weeks to homes in states whose votes will be critical in the presidential election, and more will be distributed through early October. Most of the 28 million DVDs were included as advertising inserts in newspapers. Some also were mailed directly to homes.

The campaign by Clarion Fund -- a nonprofit organization founded by filmmaker Raphael Shore "to educate Americans about issues of national security," its website says -- has prompted criticism of the newspapers for distributing what some describe as Muslim-bashing propaganda.

There are also accusations that the group is trying to influence the election in favor of Republican presidential candidate John McCain, cast by some as tougher on terrorism. One Islamic advocacy group recently filed a complaint with the Federal Election Commission, alleging that Clarion is abusing its tax-exempt status by engaging in politics.

"Any neutral observer would say this is a biased, one-sided, inflammatory portrayal that seeks to portray Muslims and Islam as Nazi-like," said Ibrahim Hooper, spokesman for the Council for American-Islamic Relations, a nonprofit based in Washington, D.C.

"If you're able to raise the level of fear in the public about terrorism or national security, those people are more likely to skew toward John McCain," he said.

Hooper said he heard reports that some DVD recipients in Ohio also had received automated phone calls referencing the film and saying, "We hope you take it into consideration when you go into the voting booth."

Clarion spokesman Gregory Ross said the group had no involvement in such calls.

Ross called the DVD campaign a nonpartisan effort to show Americans the dangers they face. The timing of the distribution, he said, relates not to the election but to the anniversary of the Sept. 11, 2001, attacks.

"It's a reminder that a 9/11 could happen again, and we need to remember the past," Ross said.

He said the group chose to distribute the DVD in swing states -- including Ohio, Pennsylvania, Colorado, Michigan, Florida and North Carolina -- because that's where media attention is focused.

"That's where the press is these days, and we want to get the press engaged," Ross said.

Until recently, one Clarion website, RadicalIslam.org, had an article that expressed pro-McCain views. When questioned by the news media, Clarion took the article down. Its inclusion on the site, which has links to a number of articles, was an accident, Ross said.

"There was one article that slipped through the cracks," he said. He said the group had hired an editor to ensure it didn't happen again.

Ross declined to reveal how much Clarion had spent on the DVD campaign, but said it was in the "multimillions." He also would not name donors to the project. Ross said donations had risen sharply since the distributions began. Obsession is Clarion's first project; the nonprofit has financed a second film, The Third Jihad, due out next month.

About 70 newspapers have included or will include Obsession as a paid advertising insert. Of those approached, only a few refused, Ross said.

"We applaud those who have carried it and are willing to stand up to the radical Islamists," he said.

Most newspapers that have accepted the ad insert have defended the decision as a 1st Amendment issue. The Denver Newspaper Agency, which publishes the Denver Post and Rocky Mountain News, seeks to "keep access as wide as possible" on issues-driven advertising, said spokesman Jim Nolan. That position doesn't connote support for the content of the ad, he said.

"Our business is to come down on the side of letting opinions be expressed," he said.

The News & Record in Greensboro, N.C., rejected the insert, calling the DVD "fear-mongering and divisive."

"Of course, it's not free speech," wrote the paper’s editor, John Robinson, on his blog.

"It's a paid advertisement making the case for one side of a complicated, controversial issue," he wrote, noting that the other side would go unheard unless it buys its own ads.

He continued: "Newspapers decide not to publish information every day. Most of the time we call it news judgment."

"If I paid you to distribute an anti-Semitic DVD, would you be so obliging?" Laurel Thompson wrote in a letter to the editor of the Denver Post, which distributed more than 553,000 copies of the DVD in its Sept. 14 edition. "Or how about a DVD celebrating the courage of [Columbine High School killers] Harris and Klebold?"

Newspapers should not have accepted the advertising, said Marianne Weigand, 50, of Arvada, Colo., who complained to the Rocky Mountain News in a letter to the editor.

If she wanted to watch such a film, she would have sought it out, she said.

"If you're going to send something out, it's a sample of Tylenol, not a movie full of something so violent, something that not everybody wants to watch," Weigand said. "It's propaganda about terrorism. . . . I don't see anybody benefiting from watching that."

When the film was released in 2006, shown primarily on college campuses, its supporters called it eye-opening; opponents called it inflammatory and unfair. The documentary -- which begins with a disclaimer that "most Muslims are peaceful and do not support terrorism" -- draws a parallel between Islam and Nazism and shows images of Sept. 11 and the terrorist bombings in Madrid and London, as well as footage of suicide bombers, children chanting about jihad and crowds railing against America.

Muslims across the United States have expressed anger about the film and concern for their safety. At the Northeast Denver Islamic Center, Imam Abdur-Rahim Ali said the dominant emotion was disappointment.

"People shake their heads and say, 'Here we go, it's election time,' " he said. Though the McCain campaign has denied any involvement, Ali doesn't believe that.

"It's hate-mongering," he said. "I think good American citizens should stand up against that type of behavior. I love my country; I'd fight for it, I'd die for it."