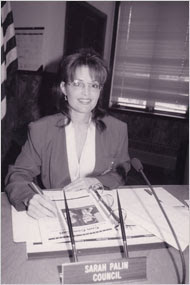 An interesting event occurred late last night. Politico blogger Ben Smith contacted us to ask if a photo of Sarah Palin showed her with a copy of one of our publications.

Apparently the Palin family had released the photo to AP and the New York Times picked it up for an article last week. Politico was inaccurate in identifying the reprinted article as the cover of the magazine.

Clearly seen in the photo is a reprint of an article from The New American magazine back in 1995, entitled “Con-Con Call” in a three-ring binder in front of her. ...

Story continues at the JBS website.
Posted by Alex Constantine at Monday, September 29, 2008