On a Bad Case of Cranial Bleeding, the Birth of CSC & the Collapse of Fannie Mae

This morning, the corporate world was disheartened to learn of the brain hemorrhage death of prominent business consultant Michael Hammer while riding a bicycle with a friend in Boston - one of the 25 "most influential" people in America, per Time magazine. Today's Wall Street Journal:

In the early 1990s, as personal computers, the Internet and cellphones began to transform the business landscape, Michael Hammer rose to prominence as the champion of the decade's trendiest management buzzword: "re-engineering."

Using new paradigms and technologies, companies were meant to redesign business processes from the ground up to meet goals faster and serve clients better.

Mr. Hammer, who died Thursday at age 60, gave the idea currency in an incendiary 1993 business best seller Reengineering the Corporation: A Manifesto for Business Revolution. The book sold over two million copies, stoking the growth of a multibillion-dollar re-engineering movement and catapulting Mr. Hammer to the forefront of management consultancy. In 1996, Time featured him on its first annual list of America's 25 most influential people, and Forbes in 2002 ranked "Reengineering the Corporation" the third most influential business book of the past two decades.

Hammer was revered by the business press, but his prescription for reengineering the corporation "had a dark side" - similar to the industrial contributions of Arthur Koestler - as the streamlining of processes often went hand in hand with reductions in jobs. "Often the term became jargon for mass layoffs. Mr. Hammer's rhetoric didn't help. 'It's basically taking an ax and a machine gun to your existing organization,' he said in a 1994 interview with Computerworld. He once told Forbes: "On this journey we'll carry our wounded and shoot the dissenters."

A fond farewell written by financial consultant Peter S. Cohan sheds light on the formation of Computer Sciences Corporation (CSC), the federal/military contractor that vies with Blackwater for the Most-Corrupt-Business-of-the-Year Award. Cohan, writing at Bloggingstocks.com:

"As it turns out, I have a professional connection to Hammer and his co-author, James A. Champy. Hammer taught me at MIT -- I took a course called Office Automation Systems from him in which he talked about the importance of imagining how a process would work if it could be re-imagined from scratch. And Champy hired me to work for the firm he co-founded with several MIT Sloan School professors -- Index Systems -- which grew dramatically after the Reengineering book was published. Index was ultimately acquired by Computer Sciences Corporation (NYSE: CSC)."
http://www.bloggingstocks.com/2008/09/05/reengineering-guru-dies/

Now my own brain felt as though it was bleeding. Thought I'd been reading about an intellectual who had revolutionized business management, albeit there was that "dark side." And now an even darker element entered the picture - CSC - and Index Systems. Sleaze.

This came personified in the form of Thomas P. Gerrity, the former dean and Joseph J. Aresty Professor of Management at the Wharton School of Business at the University of Pennsylvania. Prior to Wharton, he was the Chairman and CEO of the Index Group, the CSC subsidiary that grew out of Cohan's MIT project. Gerrity earned his S.B. and S.M. in EE from MIT in 1963 and 1964 respectively, attended Oxford University, was a Rhodes Scholar and received his Ph.D. from the MIT Sloan School of Management in 1970.

Mr. Gerrity also served as a member of the Board of Directors of Fannie Mae Corporation from September 1991 to December 2006, and as the Chairman of the Audit Committee from January 1999 to May 2006. That's right, Fannie Mae - also in the news this morning because the federal government is bailiing it out.

Ooh! - There's the cranial bleeding sensation again - could it be that Michael Hammer was thinking about all of this when he keeled over on his bicycle and expired on the spot?

Was his last thought of Tom Gerrity and his departure from Fannie Mae two years ago, when he was forced out due to a very costly accounting scandal? The Washington Post reported:

Fannie To Settle Charges, Pay Fine
Some $400 Million In Penalties Are Part of Agreement
By Kathleen Day and Annys Shin/WP
Tuesday, May 23, 2006; Page D01

Mortgage giant Fannie Mae will pay about $400 million in penalties under an agreement with two federal agencies to settle charges related to its $10.8 billion accounting scandal, sources said yesterday.

The settlement would end a nearly three-year investigation by the SEC and OFHEO into widespread accounting manipulation by the company -- including the use of improper accounting techniques to maximize bonus pay for top executives. It would not cover potential SEC action against individuals involved in Fannie Mae's problems, nor does it end a criminal investigation by the Justice Department.

But for the company, it could mark a step toward resolving a controversy that has undermined its credibility as well as its stock price and has fueled efforts in the White House and Congress for stricter regulation.

The company's troubles were first made public in 2004 after a preliminary probe by OFHEO alleged that Fannie manipulated earnings between 1998 and 2004 to smooth the growth of profits it reported to investors. ... A separate probe, prepared for the Fannie Mae board by former senator Warren B. Rudman and released in February, concluded that the company manipulated earnings throughout the period under review and found that in one case it was done to maximize bonus payments.

Gerrity had been perceived as a central participant in the Fannie Mae scandal for some time; so were other members of the board, and they are interesting in their own right:

... Last week, Fannie Mae said it will replace Thomas P. Gerrity as head of its audit committee at the end of the year. Gerrity ... has been audit committee chairman for seven years. Since the scandal broke in 2004, corporate governance watchdogs have urged Fannie Mae to replace its audit committee, which is responsible for overseeing the company's accounting and financial practices and the performance of its outside auditor. Most of the committee has turned over in the past two years. Xerox chairman and chief executive Anne M. Mulcahy left in September 2004. Then Thayer Capital Partners' Frederic V. Malek retired from the board at the end of last year. Presidential appointees William R. Harvey and Taylor C. Segue III were not reappointed. ...

A federal judge yesterday dismissed civil securities fraud charges against some current and former members of Fannie Mae's board, saying that investors had not presented specific enough allegations for those elements of their lawsuits to go forward. The charges were part of a tangle of litigation stemming from a multibillion-dollar accounting scandal at the government-chartered mortgage funding company. People who served on Fannie Mae's board remain defendants in lawsuits alleging a different offense -- that they breached their duties. ... The dismissed securities fraud charges involved directors who were on Fannie Mae's audit committee, including Thomas P. Gerrity, a professor and former dean at the Wharton School; Frederic V. Malek, a Washington financier; and Anne M. Mulcahy, chairman and chief executive of Xerox. Institutional investors had alleged that members of the audit committee "failed miserably" in the performance of their duties. The allegations about the committee "do not demonstrate the required state of mind of extreme recklessness," wrote Judge Richard J. Leon of the U.S. District Court for the District of Columbia. Leon also dismissed charges against an insurance company, Radian Guaranty, which allegedly sold Fannie Mae a sham policy that helped Fannie Mae officers manipulate earnings. Radian "is merely a third party alleged to have provided Fannie Mae with the means to misrepresent its finances" and was not responsible for Fannie Mae's statements to investors, Leon wrote. http://securities.stanford.edu/news-archive/2007/20070801_Dismissal103806_Hilzenrath.html 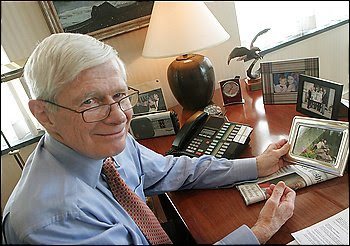 Frederic V. Malek is of particular interest here - he was campaign manager of the Bush-Quayle campaign in 1992, and is only the deputy national finance chairman for John McCain’s current presidential campaign.

He's a Watergate holdover, a walking, talking conspiracy theory. "Malek," according to Medical World News, "was the son of a beer salesman in Berwyn, Illinois. He graduated from U.S. Military Academy in 1959. He served in Vietnam in the Special Forces, training South Vietnamese counterinsurgents. He left the Army in 1962 and married Marlene McArthur of San Francisco, and graduated from the Harvard Graduate School of Business Administration, and went to work at the management consultant firm, McKinsey & Co. He and several other consultants had plans to start their own firm, but one was 'drafted by Robert McNamara to help out at Defense.' ..." (Is Health Planning Too Vital to be Left to MDs? Medical World News, Jul. 31, 1970, pp. 16-18.)

And there are his political bona fidés:

Malek was Chairman of Triangle Corporation, Columbia, SC, from 1967-1969. From 1969 to 1970 he was Deputy Under Secretary of the US Department of Health, Education and Welfare; Special Assistant to Pres. Richard Nixon from 1970-73; Deputy Director of the Committee to Re-Elect the President ("CREEP") in 1972; Deputy Director of the Office of Management and Budget, 1973-74; Member of the White House Domestic Council, 1974-75; and in 1975, he left government and became Vice President of the Marriott Corporation.

More connections place him snugly among the Nixonites: "Malek's boss at the Office of Management and Budget in Aug. 1973 was Roy L. Ash, for whom the Ash Council was named. The Ash Council created the Environmental Protection Agency. Until 1972, Ash was the president of Litton Industries, one of whose numerous divisions, Litton Bionetics, was in the second year of a $10 million-plus contract to manage, operate and maintain the National Cancer Institute's Frederick Cancer Research Center at Fort Detrick, Maryland. (FASEB Newsletter, 1973 Aug;6(6):2-3.)"

"The Watergate scandal kept Nixon from fully carrying out his experiment in control, but his efforts were not forgotten. In fact, E. Pendleton James, who was in charge of Ronald Reagan's preinaugural talent search and then became assistant to the president for personnel, had worked under Fred Malek, Nixon's personnel chief. Malek was the author of the infamous 'Malek Manual,' a guide to political appointees, which emphasized a telling message: 'You cannot achieve management, policy or program control unless you have established political control.' ...Malek then went on to describe techniques designed to 'skirt around the adverse action proceedings' required to proceed against civil servants in a legal manner. All were designed 'to remove undesireable employees from their positions.'" (The President and the Executive Branch, by Joel D. Aberbach. UCLA Center for American Politics and Public Policy Occasional Paper Series 9 1-9.) William H. Taft IV was also a member of the Reagan transition team. (White House Transition Team. Washington Post, Feb. 18, 1980.)

Frederic V. Malek, President GW Bush's bud, placed him on the board of directors of a company controlled by The Carlyle Group as a favor to his father.

Was the late Michael Hammer thinking about them when his life was ended prematurely by a brain hemorrhage? I will stop now to avert a possible repetition - I expect to live a long life, and the shock of political realization in America can be damaging to one's constitution.
Posted by Alex Constantine at Monday, September 15, 2008