Comair Crash: False Statements from the FAA and NTSB 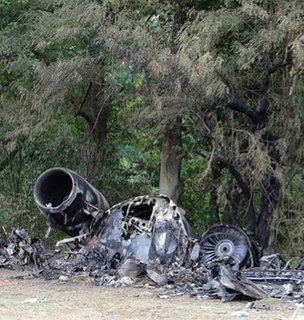 Air traffic controllers ARE expected to watch planes on the tarmac, despite claims to the contrary from federal regulators, according to the Dept. of Labor.

Spokesmen for the FAA and NTSB insist that air controllers are not responsible for watching over planes on the runway from the tower, that a second controller at Blue Grass "wouldn't necessarily have made any difference" in the case of Comair.

BEFORE the crash, the stipulation that two controllers must man airport towers was, according to the FAA's own documents (and supported by written union rules), a "regulation." AFTER the crash, FAA spokesperson Debbie Hersman claimed that it is only a "guideline." Reporters immediately began referring to the rule as a "guideline" without bothering to fact-check.

"... Although airport tower controllers or terminal controllers watch over all planes traveling through the airport’s airspace, their main responsibility is
to organize the flow of aircraft into and out of the airport. Relying on radar and VISUAL observation, they CLOSELY MONITOR EACH PLANE [was Comair 5191 an exception? "EACH" plane, it states] to ensure a safe distance between all aircraft and to guide pilots between the hangar or ramp and the end of the airport’s airspace. ..."

It's in their purview to watch.
----------
If air controllers are not expected to actually watch planes on the tarmac, why does Akron-Canton Airport make a point of doing just that?

From 6 a.m. to midnight, when radar in the tower is operating, there have to be at least two controllers in the tower, he said. One is responsible for “LOOKING out the window” to *WATCH* the runways and taxiways at the airport, and the other is responsible for watching radar.
---------
Visual observation of planes on the tarmac is standard practice. Also, controllers "REMAIN IN CONTACT with the plane [to] offer commentary on a plane’s failure to follow instructions."

The NTSB has confirmed the leak that lingered much of Sunday by saying yesterday evening that the crash of Comair flight 5191 was preceded by an attempted departure off the wrong runway at Lexington’s Blue Grass Airport.  The NTSB cited the compass heading recorded on one of the jet’s black boxes at takeoff -  and today, the Board’s Debbie Hersman said the tower tapes had been pulled.  She disclosed that the tower cleared the flight for takeoff from runway 22, but says evidence shows the plane took off runway 26.

What Hersman won’t say – and what remains troubling – is whether the lone person working in the tower at Blue Grass said or did anything when the airplane taxied to the wrong runway.  Many controllers will VISUALLY confirm that tower instructions are followed by cockpit crews to fruition. THEY WILL REMAIN IN CONTACT with the plane and can offer commentary on a plane’s failure to follow instructions.  After all, the tower knows the lay of the airport.  It’s their home turf.  Pilots find themselves in different cities every work day and might not be well versed on airport layout.  Add to that the disclosure that there were confusing runway lighting issues, a new and different taxi route to the runway, and a just-completed re-paving project on runway 22.

Yes, Hersman says the controller correctly cleared flight 5191 for takeoff from runway 22, but she won’t say whether that controller observed or attempted to verbally notify the crew when it strayed to the shorter runway 26.

Few media outlets have raised the possible inaction of the controller as a potential issue in this case.  The only story mentioning the controller’s involvement was an item in the Louisville Courier-Journal which quoted St. Louis University aerospace engineering professor emeritus Paul Czysz.  He told the paper that the tower typically guides the plane during its taxi.  “So the tower should have been able to see what (runway) threshold he was at.  That’s why you have a tower,” said Czysz. Indeed. Perhaps the tapes – or the evidence that is retrievable will never verify what that controller did or didn’t do when the plane’s crew taxied to the wrong runway.  But it does seem curious that the NTSB is saying that the tower cleared the airplane from the correct runway but won’t expand on whether there were further conversations between tower and crew.  And it won’t say whether there was an attempted intervention by the tower prior to the ill-fated takeoff.
Posted by Alex Constantine at Wednesday, September 27, 2006