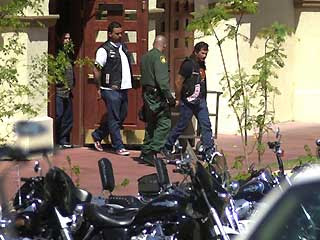 Criminal investigators in Tucson put up a wall of secrecy last week after a fire that police believe was intentionally set damaged the home of a federal investigator who has faced death threats since he infiltrated the Hells Angels motorcycle club. Dawn Hanke, a Pima County Sheriff's Department spokeswoman, confirmed that deputies are investigating a blaze at the residence of Jay Dobyns, who is among the most celebrated agents in the history of the Bureau of Alcohol, Tobacco, Firearms and Explosives. Hanke said detectives have not established whether the blaze was set by an arsonist. She declined to provide additional information.

The blaze started about 3 a.m. last Sunday in the back-porch area at a house on a mini ranch in northwest Tucson, according to Willie Treatch, a fire marshal with Rural/Metro. Dobyns was not home at the time, but his wife and two children had to run outside in their nightclothes. Treatch said there were no injuries, but flames consumed the rear of the house, causing about $30,000 in damage. He would not discuss the investigation.

Dobyns, an agent for two decades, declined comment for this story.

The former all-conference receiver on the University of Arizona football team joined the ATF in 1987 and spent much of his career working dangerous undercover cases. He was wounded twice in the line of duty and received some of law enforcement's highest awards.

Several years ago, Dobyns penetrated Hells Angels clubs in Arizona by posing as a criminal affiliated with another biker gang. The case, known as Operation Black Biscuit, resulted in numerous indictments but mostly fell apart in court amid defense allegations of wrongdoing by snitches, investigators and prosecutors.

According to federal records, Hells Angels and other criminals have made threatening comments about Dobyns and his family and once sought to enlist prison-gang members to carry out a hit.

As the operation ended, an outlaw biker in Tucson supposedly warned Dobyns he would always be a target, looking over his shoulder. Dobyns subsequently complained that the ATF failed to protect him and his family despite 20 years of service. He criticized bureau administrators and filed a federal claim for damages.

Special Agent Tom Mangan of the ATF declined comment on the fire and would not say whether the bureau is assisting Dobyns with security.

Dobyns' exploits are described in several books, and he has co-authored a new one, set for release in February.

Seattle officer involved in biker shooting was disciplined before
August 11, 2008

The Seattle police officer who reportedly shot a known member of the Hells Angels motorcycle gang at a weeklong rally in South Dakota was previously disciplined, once for taunting fans at a football game and another time for allegedly threatening to shoot a restaurant manager who had asked him to leave.

Police officials have not released the name of the officer involved in the shooting, or four other officers with him at the time, but sources have confirmed he is a 43-year-old detective who works for the Seattle police Pawn Shop Squad and is a police guild board member. The officer also is known throughout the department as an avid motorcycle rider.

South Dakota investigators have obtained videotape of the shooting that Seattle union leaders believe will exonerate the officer of any wrongdoing in the altercation that left a Hells Angels member wounded.

"I think it's going to be pretty evident that the officer was fearful of his safety and life and that's why he had to fire," said Sgt. Rich O'Neill, president of the Seattle Police Officers' Guild.

O'Neill said Seattle officers are now concerned for all of their safety because of the Hells Angels' reputation of violent retaliation if one of their members is attacked. "There is a real threat," he said.

Authorities have said the officer and four others at the scene all identified themselves as members of the Iron Pigs, a motorcycle club made up mostly of police officers and firefighters. 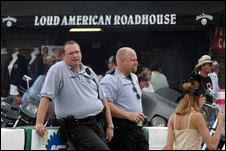 Police Officers Jon Pike, left, and Mike DeBruin, who were hired for the motorcycle rally in Sturgis, S.D., monitor Sturgis' Main Street in front of the Loud American Roadhouse on Saturday. A vacationing Seattle police officer was involved in a shooting that occurred at the bar on Saturday about 1 a.m. Of the other four officers at the scene, one has been identified as a sergeant who at one time ran the security detail for former Seattle Mayor Norm Rice. Ryan Soderlin/Rapid City Journal

The two men were with a group of officers who had traveled to Sturgis, S.D., to join the annual motorcycle rally there.

The shooting happened around 1 a.m. Saturday at the Loud American Roadhouse, a popular bar that held as many as 500 patrons at the time. Sturgis police reported that there was an altercation between some Hells Angels gang members in the bar and members of the Iron Pigs, all of them Seattle police officers on vacation.

Authorities have not said what led to the confrontation, though sources said it might have been sparked because the officers were displaying colors or other identifying markings associated with their club. At some point, the confrontation became physical, and one of the officers allegedly fired two shots, striking and wounding one of the Hells Angels.

O'Neill said he spoke with some of the officers who attended the Sturgis motorcycle rally and that based on early indications, he believes the officer was defending himself from a "completely unprovoked" attack that might have involved choking.

"It's unfortunate that it had to end like this," O'Neill said. "All the same, the indications are that somebody was totally jumped and beaten. If that's what the investigation says, they have a right to defend themselves."

Seattle Police Chief Gil Kerlikowske has relieved all five officers of duty, pending the outcome of the investigation by South Dakota authorities, according to a statement released on Saturday.

The chief also sent a team of detectives to Sturgis to learn more about the incident, including homicide Lt. Jim Dermody, homicide detectives and a sergeant with the Office of Professional Accountability. The team arrived Saturday, but there was no information available on Sunday as to what they might have learned.

"Our job isn't to interfere with the investigation, but to gather information for our internal purposes," said Seattle police spokesman Sean Whitcomb.

The group of Seattle officers has attended past Sturgis motorcycle gatherings without problems, O'Neill said.

Federal law allows off-duty officers to carry their guns, and the Seattle Police Department's manual gives each officer the option to carry one while off duty.

"One of the reasons for that federal law is that police officers, unlike anyone else, are almost on duty all the time," he said. "You never know when you might run into someone who you arrested." All are looking forward to "getting back to this side of the mountains," he said.

The officer implicated in the shooting has not been arrested or charged with any crime, but has been disciplined in the past. The detective was suspended for two days for conduct unbecoming an officer during a Seahawks football game on Jan. 8, 2005. He arrested a fan he said had assaulted him, but other witnesses said the officer's comments at the conclusion of a game the Seahawks lost to the Rams had provoked the crowd. He allegedly taunted the Seahawks fans by pretending to cry like a baby and yelling out, "Go Rams."

The man he arrested had objected, yelled at him and, during a melee, the detective was struck with a megaphone the man was holding. The officer contended the man had assaulted him and so arrested him, but other witnesses said the blow was accidental.

According to the city's investigation documents on the matter, a witness told investigators, " 'Had the officer not said a word, it would never have happened." She adds police "are supposed to keep the peace, not rile up the crowd.' "

The department disciplined the detective but continued to permit him to work off-duty security at the football stadium if he worked in a different part of the field.

On Aug. 12, 2005, he was again accused of getting into an altercation, that time at a Tacoma restaurant while off duty.

He at one point allegedly threatened to shoot the restaurant manager, who had asked him to leave.

According to internal documents, Tacoma city authorities declined to prosecute the officer, finding there was no evidence that he intended to carry out his threat, but he received a written reprimand for the incident.

But at least one witness said most regular patrons of the restaurant knew he was a cop, and that he was known to always carry a gun.

The police guild is offering moral support to the officer and his family, O'Neill said, and the union's attorney is aware of the shooting.

"The decision to fire is up to each individual officer. Only you know when you feel the time is right and your life is in danger," he said, adding, "It's a traumatic incident any time someone has to fire a handgun."