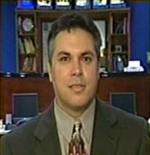 Ray Robison is passed off as a "National Security" analyst by the San Francisco Examiner. His "informed analyses" of intelligence and military issues has led him to write psyop howlers steeped in self-serving "conservative" fantasy, to wit: "The Afghanistan success story," "Al Qaeda's Man in Saddam's Iraq," "More Evidence of Saddam-al Qaeda Ties" and "Documents Support Saddam-Taliban Connection."

One of Robison's funniest pieces, posted at his blog in 2006, employs "logic" and "common sense" to arrive at an original "deduction": Bin Laden AND his henchman Saddam Hussein were behind the anthrax mailings:

"So, that anthrax probably didn't come from top US labs after all?"

Even the FBI, stumbling through an awkward cover up of the military operation, hasn't had the nerve to claim that Al Qaeda, in league with some "rogue nation," probably Iraq, perpetrated the lethal mailings:

"My reasons to disbelieve the US scientist theory are not based on discovered documents or interviews, but rather reason and probability. ... There are two prevailing theories. One theory is that a US scientist did it. The other is that the Saddam regime of Iraq or another rogue government with anthrax capability gave anthrax to al-Qaeda. Other theories abound but I will limit the argument to the two theories that fit the facts best.

"Those who follow the news about the anthrax attack know that for years the FBI has been investigating American defense scientists. Let me be more specific. The FBI has been pursuing U.S. citizens with high level clearances, years of professional experience and demonstrated loyalty to this country. The FBI has found nothing. As anyone working at a government facility knows, the morning of the 9/11 attack, physical security went on high alert. Military bases closed gates, people and vehicles were searched. It is not impossible that someone at a bio-weapons research facility could have smuggled out the anthrax that morning or shortly after in response to the attacks. It is highly unlikely though.

"That day and for at least the week after would have been the worst time to smuggle anything out of a high security area. ...

"Weaponized anthrax is in very short supply in the U.S. inventory. The supply we do have is most likely kept in conditions that enable inventory down to the microgram. It is surely weighed and measured anytime it is utilized for research. ...

"Motivation is the key problem in my view. Defense scientists at this level have Top Secret clearances, usually for compartmentalized information. It takes an extreme level of vetting to be granted this clearance. The scientist would surely be a Ph.D. That’s a lot of years of demonstrated hard work to throw it all away for a bioweapons attack without a solid motivation. The real people involved with this type of research are smart, dedicated, successful and patriotic, not like a character in a bad movie who is motivated to hurt the United States because they were overlooked for a promotion or saw some sort of poetic justice at using US anthrax on the United States. ...

"So what makes more sense? A nation and a terrorist organization that had the expertise, the opportunity, the motivation, and in the case of al Qaeda, in fact carried out a monstrous attack at nearly the same time did it? Or that an American scientist with the highest clearances, demonstrated patriotism by working in a very dangerous field to defend this nation, who would have lost years of hard work, with no seeming motivation, with a very small pool of suspects, and apparently small concern at being caught, smuggled the anthrax out of a high security facility to attack Americans?

"What does your common sense tell you? Most of my friends (usually military) at the time of the attacks believed the anthrax was a continuing, near simultaneous attack with the plane hijackings of 9/11."
Source: http://rayrobison.typepad.com/ray_robison/2006/09/so_that_anthrax.html

Despite the psyop fantasies churned out by Robison, and the fact that he is consistently wrong by about a mile, the CIA's Mockingbird Press continue to publish this DoD/CIA shill's ludicrous cant.

"Ray Robison," the Examiner informs us, "is a former army officer who now works as a military analyst and freelance investigative journalist." At his blog, Robison notes, "I am a military analyst living in Huntsville, Alabama. Before that I was an army officer and also a member of the Iraq Survey Group. ... My work has been on Fox News, American Thinker, Rush Limbaugh, Slate (Hitchens) and 411mania." (Source: http://rayrobison.typepad.com/about.html)

Amazon notes that his "work" has been cited by "the New York Times, The Guardian, Le Monde, Investor's Business Daily, US News and World Report, Slate Magazine, Jerusalem Post, National Review, and many national radio programs. Although he specializes in Iraqi document exploitation, he also writes about general military matters and exposes media abuses against the military and military members." (Source: http://www.amazon.com/Both-One-Trench-Saddams-Documents/dp/1419678663)

The Guardian tells us that Robison "has a greater claim to authority than most." That is, most third graders.

Robison's latest celebration of "reason" and "common sense" - in defense of the CIA and its machinations to draw the country into the illicit and genocidal Iraq war - is about as brilliant as his "deduction" that Bin Laden was behind the anthrax mailings. The latest "reasoned" argument, boiled down, is based on a PHANTOM DOCUMENT that a reporter for the Telegraph LOST ("Coughlin didn't know where it had gotten to after he saw it ... ") but TOLD him about:

"Author Ron Suskind claims in his new book The Way of the World that a letter reported to connect the Saddam regime to al Qaeda is a fake and was crafted by the CIA according to two former CIA officers. ...

"[S]hortly after the invasion of Iraq journalist Con Coughlin writing for The Telegraph revealed that he had been provided with a document from what he called a reliable, Iraqi source which expressly showed Mohammad Atta, the 9/11 attack ringleader, training for the mission in Iraq with Saddam's knowledge. Coughlin claimed that the letter formed the first “proof” that Saddam was involved with 9/11.

"I contacted Coughlin while researching the book and he stood by his report as of mid-2007. It is doubtful that many other people have seen the original of this document (including myself) since even Coughlin didn't know where it had gotten to after he saw it when I talked to him. ...

"While my coauthors and I have not seen it, we find the contents of the document (as described by Coughlin) to be within the bounds of reason. ..."

As we've seen, Robison's analytic prowess is not all it's cracked up to be, and leads him to draw ludicrous conclusions that happen to buttress the Murdochian "conservative" perspective on the world, ie. fascism. At least, his facile "reasoning" WOULD be amusing if it wasn't an obvious psyop tool intended to lead the naive down the primrose path of blind patriotic (jingoistic) ignorance and insanity - ideal conditions for the flourishing of Mussolini's corporate dreams.
Posted by Alex Constantine at Saturday, August 23, 2008