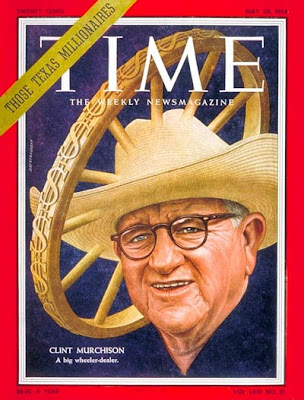 Excerpt: "Where Dallas' elite go to cool their heels in the heat of summer," By ALAN PEPPARD, Dallas Morning News, August 4, 2008

... To be caught in one's own hometown between the Fourth of July and Labor Day is prima facie evidence that, in financial terms at least, you are mortal. Even a leased Maserati and a leased Rolex can't erase the shame of not having a summer home in the Hamptons.

For affluent Dallasites, Colorado has always been the default destination for summer hedonism. The late Dallas tycoon John Murchison was one of the founders of Vail and it still has its adherents. ...

The annual migration of Dallasites to La Jolla, Calif., began in 1951 when Clint Murchison Sr., father of Vail's John Murchison, built the Hotel Del Charro in the seaside town. Three years later, he and his best friend, Fort Worth oilman Sid Richardson (great-uncle of the billionaire Bass brothers), bought control of the nearby Del Mar Race Track.

Their guests not only included the Dallas aristocracy, but also summer regular J. Edgar Hoover and movie stars such as Jimmy Durante, William Powell, Betty Grable and Joan Crawford. (Ms. Crawford once spent an unfruitful evening pursuing the never-married Mr. Richardson, who had been the subject of a Look magazine article titled "The Case of the Billionaire Bachelor.") ...