Robert Fulford on The Hitler Salute: The meaning of a gesture 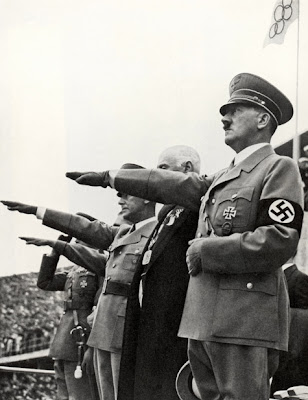 In the days of Adolf Hitler’s triumphs some of his followers showed their enthusiasm by turning a routine “Heil Hitler!” greeting into an excuse for a kind of performance piece. One man who became notorious for making a fuss of this ritual was Joachim von Ribbentrop, the foreign minister who was tried at Nurnberg and hanged in 1946. A one-time wine importer in Ottawa, he was regarded as a fool by hard-core Nazis and was so clumsy in conversation that when he served as Hitler’s ambassador to London in the 1930s he acquired the nickname Von Brickendrop.

But when it came to saying “Heil Hitler” he was a champion. It was a spectacle no one wanted to miss. Martha Dodd, the daughter of the U.S. ambassador to Germany, wrote in her memoir, Through Embassy Eyes, that when introduced to someone at a diplomatic reception, Von Ribbentrop would hold out his hand, then retreat, holding his new acquaintance at arm’s length. He would then lower his arm stiffly to his side and suddenly, almost violently raise it in a Hitler Salute, barely missing the nose of the person he had just met. “The pompousness, the maddening leisureliness, the affectation,” Dodd recalled, were calculated to make everyone know that Von Ribbentrop was present. His strategy always worked. Somehow, by Dodd’s account, she managed to avoid laughing.

Tilman Allert, a University of Frankfurt sociologist, has written a short and intensely interesting book, The Hitler Salute: On the Meaning of a Gesture (Metropolitan Books), which leaves a reader freshly impressed by the peculiar forms of evil the Nazis invented.

Studying the Hitler Salute gives a deeper meaning to the word “totalitarian.” A true totalitarian, as Hitler was, somehow arranges to dictate precisely the words that people call out when they meet for coffee. You can’t get closer to “total” than that. And only an amateur totalitarian would be satisfied with anything less than changing the content in children’s books. One of Allert’s illustrations shows a fairy-tale painting on a school wall in which the Prince awakens Sleeping Beauty with a Hitler Salute rather than a kiss. A 1936 book for teachers explained why: “No fairy tale cries out more for ethnic interpretation.” Children were to understand that Hitler rescued Germany from a death-like sleep caused by foreign races.

Beginning in the summer of 1933, only a few months after Hitler assumed power, “the German greeting” was made compulsory. Civil servants used it when meeting one another and at the end of their letters. Postmen, delivering their mail, sang out “Heil Hitler!” Schoolchildren faced their teachers with it every morning. (Tiny Hitler dolls with movable right arms demonstrated the technique.) Department store clerks said, “Heil Hitler, how may I help you?” Even washroom attendants used it.

Wherever two Germans met, Hitler was present as a silent third party. He acquired, rhetorically, something of the magic of a god — particularly when the Hitler Salute replaced “Grüss Gott” (“God’s greeting”), a traditional salutation among Roman Catholics in southern Germany. Travelling in Bavaria, Samuel Beckett noticed that on the front of a Dominican church “Grüss Gott” had been crossed out, replaced by “Heil Hitler.”

In 1934, the Hessian State Government sent a memo to local police stations mandating capital punishment for subversive monkeys. It had come to the attention of the state that vaudeville performers were training monkeys to give the Hitler Salute at the end of their performances. This was a mockery of the German spirit and liable to provoke public disorder. Therefore, “In case of violations, see to it that said animals are destroyed.”

In private, people who trusted each other might use the Hitler Salute with a sneer, making it clear (as Allert puts it) that in public they “saluted opportunistically.” But there was always a risk. The National Socialist German Students’ League advised everyone to discard all other greetings, including Auf Wiedersehen: “All who wish to avoid the suspicion of consciously obstructionist behaviour will use the Hitler Salute.” Allert argues that it “invested every human encounter with magical fascination and helped to silence a nation’s moral scruples.” It “politicized all communications within German society.”

There was always a ridiculous side to the Nazis. It was as if the Marx Brothers had turned vicious and been given a country to control. Getting everyone in a modern state to run around shouting “Heil Hitler!” at each other was obviously absurdist humour. But, like all the craziness of the Nazis, it was horribly true, a madman’s dream that couldn’t happen, but did.