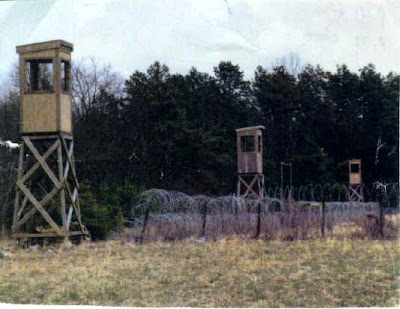 Once In Control - Martial Law Will Stay

In May 2007, Bush signed executive new orders NSDP51 and HSDP20 to replace REX84. The older order REX84 was an older directive to establish martial law in the event of a national emergency. Everything done in government is done for a reason, and these two new orders are no exception.

These new directives surprised and alarmed many real conservatives and true patriots at the time. These two orders established that the White House administration would take over all local governments under a national state of emergency, instead of Homeland Security.

In May 2007, The Washington Post apparently saw nothing wrong with it and placed the story back on page 13 (a fitting unlucky number for it), according to a CSPAN television interview with well known author and writer Jerome Corsi:

A contradiction appears to exist here. It cites a nuclear attack or a decapitating event in Washington as the reason for this, according to security analysts. If all the leaders and the administration in Washington are dead from a nuclear attack, who will be left to take over leading the nation under executive orders NSDP51 and HSPD20?Who would be left to sign the martial law orders? This implies that martial law must be activated BEFORE an attack takes place while the administration is out of town, which clearly implies a false-flag operation by traitors of the worst kind. The administration was in Florida on 9-11, too.

As of this writing in April 2008, we are coming up on a year since these two directives was written and signed. There have been many rumors of false-flag attacks being prepared for 2008. Are these repeated rumors designed to destroy the credibility of whistle blowers, so when the real event is announced by a whistle-blower no one will listen? This question doesn't appear to have been asked by anyone, but it must be. This many not be unlike the proverbial story of the boy who cried wolf. But in this case the wolf isn't coming - he's already inside. Now it's a question of when the wolf will make his move.

Hitler took power through completely legal means. Laws were previously established in plain view of the German people before he made his dictatorial power grab. We appear are witnessing the very same thing happening today some seventy years later. Apparently no one on Capitol Hill has learned a thing from history as it repeats itself. They also have clearly forgotten Bush's words in December 1999 - "This job would be a heck of a lot easier if this were a dictatorship...just so long as I'm the dictator”. He meant what he said, he's acting exactly like one and it's happening right now.

America's case for a repeat of a Hitler type power grab is clearly underway. First there was the infamous 1200 page Patriot Act that appeared a few days after 9-11 but almost no one on Capitol Hill took time to read, but almost everyone signed off on it anyway. Some on Capitol Hill have said that soldiers with machine guns were in the hallways on Capitol Hill the night the Patriot Act was signed, and many felt intimidated they must sign it without reading it. If true, then it implies that martial law may have already been declared in secret. Soldiers in hallways have no place on Capitol Hill in civilian government. Again, another sign of a dictatorship IN ACTION.

Technically, Congress could nullify the Patriot Act overnight by claiming it was signed under duress.

There have been other draconian follow-on homeland security type acts which simply were given less intimidating names. All are good examples of political BS at work.

Are NSDP51 and HSPD20 the last of them all? Most likely they are not. We have no idea how many other orders have been signed in secret, such as the torture orders which were leaked to the media. When confronted about the torture order, Bush simply has shrugged his shoulders about in total disregard and boldly claimed he signed off on it.

Like paving stones, all the pieces have come together in plain sight to pave the highway to a completely legal totalitarian police state, with all of America to be controlled by the White House. But is this legal? Bush has abused his executive order powers countless times like previous presidents. Executive orders were originally created by Congress to establish relatively harmless laws without the need for Congressional approval, such as new legal holidays. Congress can revoke that privilege at any time that is, up until the time when martial law is declared. Military troops will send Congress home making them powerless. At that point we shall have passed the point of no return. That is, if we haven't already.

A look at the history of numerous third world countries around the globe proves one common thread exists once the military takes control of its home country, it usually doesn't return control to civilian authorities once a war or threat to security is over. And today America has been reduced to the status of a third world country as well. American manufacturing is now almost totally defense industry-driven, which makes the return of government to civilian hands after war ends even less likely in the foreseeable future.

With a 100 year war boldly proclaimed by the administration, civilian control will never be returned to Congress - for at least FIVE GENERATIONS.

Here is the REAL acid test - will military personnel voluntarily turn America into a police state virtually overnight? Will these same military personnel do nothing while they watch their friends and loved ones crushed under absolute law and absolute terror? Bread lines and soup kitchens will return, but most likely only within the confines of American POW camps on American soil. This will force people to voluntarily turn themselves in to eat. Perhaps a "guns-for-food" type program will be established to encourage the American people to disarm themselves, even though the door kickers will be sent out anyway.

In military history it's well known that if you control the food supply, you control the people. Few people know that a secure area inside Wal-Mart headquarters in Bentonville, AR has a sign declaring that secured area belongs to Homeland Security. Wal-Mart will become the food distributor for America under a rationing program. There is no other larger food store chain that can provide the required logistics that store can. In the 1990's, the military quietly did walk-throughs of all the major food store chains around the country taking notes. Somewhere there is a document detailing what the plans are. Certainly at the very least, it will entail securing ALL the grocery stores of any size. Small corner grocery stores will be cleaned out in a day or two, and would be of no interest to the military.

To believe such horrors could never happen in America, when it's now down on its knees already economically would be pure stupidity at the very least. Those in real estate swore for decades that real estate prices would always go up, too. Now these same people are panicking and on they are on their knees, too. So much for greed, as they have earned their reward. But what about innocent, hard working people that have always lived within their incomes? Do they deserve to suffer as well?

We live in a time when absolutely anything is possible. A military coup is now required to prevent declaration of martial law, kick the foreign troops out of America and restore true civilian government. Dangerous centralized dictatorship laws must also be nullified and this time, the lesson learned once and for all.

No civilian militia can restore American law at this point. They would only be labeled as terrorists and dealt with under new laws already in place. We have reached the point where restoration to civilian law and government checks/balances can only come from the inside.

But time is quickly running out.