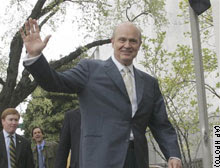 ... When Bush made headlines recently during a speech in Israel decrying the pre-World War II isolationism of "an American senator," Obama, senator for Illinois, was quick to fire back, linking Bush and McCain to the "failed policies of fearmongering" that have characterized the two Bush terms in the White House.

What needed to be said, though, was that the senator that Bush accused of "appeasement" was a member of Bush's own party, the Republican William Borah of Idaho, who in 1939 is said to have uttered the words, "Lord, if only I could have talked to Hitler, all of this might have been avoided," as Germany invaded Poland.

What also needed to be said was what writer Robert Parry outlined in a May 18 article at consortiumnews.com: "The Bush family went way beyond appeasement of Adolf Hitler to aiding and abetting the Nazis."

Parry's piece says, "Prescott Bush, the president's grandfather, was a director and shareholder of companies that profited from and collaborated with key financial backers of Nazi Germany. That business relationship continued after Hitler invaded Poland in 1939 and even after Hitler declared war on the United States following Japan's bombing of Pearl Harbor in December 1941. It stopped only when the U.S. government seized assets of Bush-connected companies in late 1942 under the Trading with the Enemy Act." ...