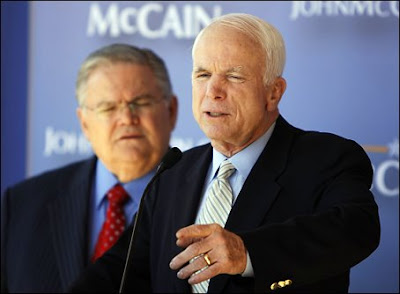 ... In March 2003, on three consecutive Sundays at his San Antonio-based Cornerstone Church, Pastor John Hagee gave a series of three sermons heavily loaded with anti-Jewish memes, stereotypes, slurs and conspiracy theories, one of which was almost identical to what was perhaps Adolf Hitler's favorite conspiracy theory, which alleged that an international Jewish banking cabal, led by the The Jewish Rothschild banking family, controls the fates of entire nation, even the progression of world events and history, through the manipulation of global money markets.

John Hagee Ministries packaged the three sermon series, given March 9, 16 and 23 of 2003, shortly before and after the US invasion of Iraq, into a set titled "Iraq: The Final War" and mass marketed it. The series was at least sold through Hagee's Cornerstone Church bi-monthly magazine and also via the Internet, off John Hagee's Cornerstone Church/John Hagee Ministries website. But the three sermon series may also have gone out on broadcast stations and networks, carrying Hagee's sermons, to tens of millions of households worldwide.

Thus, the man Senator Joseph Lieberman had praised to such a high degree at CUFI 2007, by likening Pastor John Hagee to "Moses," had also, in 2003, earned a profit by retailing what was essentially a commercial product promoting one of the most notorious anti-Jewish conspiracy theories known to modern history, possibly Adolf Hitler's favorite anti-Jewish conspiracy theory -- which served as a background 'justification' for the Holocaust. The alleged conspiracy theory favored by Hagee and Hitler alike ? -- "Jewish Bankers manipulating international finance control the world."

Below: following a 10-minute documentary, by the author, shows that Hagee's "international satanic Jewish banker" conspiracy theory is almost identical to the one espoused and sanctioned by Hitler and also aired in the most notorious anti-Jewish propaganda film ever made, the Goebbels-supervised film "The Eternal Jew." ]

In the last sermon of Hagee's March 2003 series, entitled "The Final Warning, The Coming Crash and The New World Order" and given on March 23, Pastor Hagee declared that an "unseen government" was behind America's economic problems, then Hagee identified the culprits; the first he cited were the members of the European-based Rothschild banking family, whom Adolf Hitler and his propagandists had also targeted in the buildup of Nazi demonization of Jews that preceded the "Final Solution."

Hitler deployed that conspiracy theory -- remarkably similar to Pastor Hagee's, in a chillingly prophetic speech -- on January 30, 1939, which Hitler gave to the German Reichstag. The alleged conspiracy of international Jewish bankers was forcing Germany into war, claimed Hitler, and if they succeeded in instigating the next world war the result would not be the defeat of Germany but 'the destruction of the Jewish race in Europe."

In his march 23, 2003 sermon given at Pastor John Hagee's San Antonio, Texas Cornerstone Church, Hagee first wheeled out the outlines of the alleged satanic, "Illuminati" banking conspiracy, which as a conspiracy theory falls into a class of conspiricism that is not uniformly anti-Jewish. But then Pastor Hagee invoked another, nakedly anti-Semitic class of conspiracy theory by naming specific Jews as alleged conspirators: Alan Greenspan and the European-based Rothschild banking family.

At approximately 16:01 into the body of his sermon pastor Hagee stated:

Out of European history then comes a group of people who are, who call themselves the Illuminati. They were a group of Satanists. The word Illuminati comes from the word illuminate which means to enlighten. The Bible says Satan is an angel of light. Satan is an angel of light. The Illuminati were a super secret organization of international financial power brokers in Europe, who had as their goal a worldwide economic power, and they would rule the world through economic wealth.
22:00 into the sermon, Hagee continued fleshing out the alleged conspiracy:

Now here are the four things that have to happen before the New World Order can come to power. One, there must be the destruction of the economic system, the monetary system.
It may be shocking to you but I believe that America's economic problems are not created by market conditions, they are planned and orchestrated to devalue and to destroy the value of the dollar.

It was done by an unseen government that I'll discuss later in this message.

Then, at 24:01, Hagee named some of the conspirators who he claimed controlled the world:

Our economic destiny is controlled by the Federal Reserve system that is now headed by Alan Greenspan. Think about this. It is not a government institution. It is controlled by a group of Class A stockholders including the Rothschilds of Europe and the David Rockerfellers of America...

"The house of Rothschild is just one example of the use of this tactic by the Jews to spread their net of financial influence over the working man. The house of Warburg follows the same tactic as do other Jewish banking families.
By the beginning of the 20th Century the Jews are sitting at all junctions of the world's money markets.

They're an international power though they make up only 1% of the population of the Earth.

Their capital enables them to terrorize world exchanges, world opinion, and world politics."

Pastor John Hagee may have even broadcast and mass-marketed his "International Satanic Jewish Banking Conspiracy" theory to tens of millions of homes worldwide. Hagee's Cornerstone Church sermons are routinely televised and the many TV stations, radio station and broadcast networks that carry Hagee's shows, of Hagee's weekly Cornerstone Church sermons, reportedly in 2008 can reach up to 100 million households worldwide.

Hagee's citation of what was extremely close to one of Hitler's own favorite conspiracy theories that the Fuehrer had wielded to such vicious and deadly effect against Germany's and Europe's Jews was not the aspect of Hagee's "Iraq: The Final War" sermon series that might seem bizarre coming from a noisily declared philo-Semite and lover of Israel such as Hagee. In his first sermon in the March 2003 triptych, Hagee declared that the US invasion and occupation of Iraq would inevitably destabilize the Middle East and lead to a massive, Russian-led Arab and Muslim attack on Israel.

Hagee appeared in favor of that possibility and in one of the sermons, entitled "The Final Dictator," Pastor Hagee went on to explicitly associate Jews with the devil and with criminally psychopathic tendencies by suggesting the Antichrist which Hagee clamed would soon arrive on the world stage would "make Hitler look like a choirboy" by "slaughtering" 1/3 of the Earth's population. That anti-Christ, Hagee predicted, will be German, a "blasphemer," gay and "partly Jewish -- as was Hitler, as was Marx." ...