Note: I don't recommend this book - it glosses over Kissinger's Nazi/CIC/CIA collaborations (I'm judging it by the review, however, and may be wrong, but Kissinger's fascist alliances are probably of more significance than piano lessons), one more feather-light propaganda puff-piece for Good Germans, and a waste of petroleum. But it does shed light on Kissinger's formative youth ... and a future war crime tribunal may yet glean insights from it.

" ... Evidently what Kissinger has avoided having to remember was the trauma of his escape from the Nazis. Indeed, when Kurz succeeds in getting him before her cameras, he 'turns as white as chalk' when the subject comes up. ... " 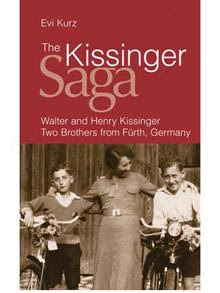 With his horn-rimmed glasses, dark suits and generally lugubrious demeanour, it is plain to see how Dr Kissinger, the Presidential National Security Advisor, was the chief inspiration for Peter Sellers’ Dr Strangelove – who, as the world is about to end, gleefully informs the bigwigs in the bunker that nuclear annihilation won’t be too bad: “I’m not saying we wouldn’t get our hair mussed. I am saying only 10 to 20 million people killed, tops, depending upon the breaks.”

Despite spending his adult life in America, Kissinger hasn’t lost or modified his sonorous Teutonic accent, “perhaps because he never wanted to,” according to Evi Kurz, in this fascinating and suggestive biography. Though he has ascended to great heights in the US – having been Nixon’s Secretary of State and the chairman, advisor or director of everything from the Chase Manhattan Bank to NBC and American Express – Kissinger remains the immigrant German: courtly, enigmatic, theatrical and somewhat furtive. There is nothing open or benign about his personality – his cunning commands respect, but not affection.

It was Evi Kurz’s intention to make a documentary about Kissinger’s early life for Bayerischer Rundfunk. For years she deluged her quarry with emails, letters and phone calls, but Kissinger always postponed an interview at the last minute. It became clear that his days were deliberately crammed with appointments so as to ensure he’d leave himself no time for private reflection. Even in his eighties, Kissinger’s diary contains back-to-back 20-minute meetings.

Evi Kurz’s brainwave was to investigate Kissinger through his more amenable younger brother, Walter, a successful businessman – a ranch in Colorado, an estate on Long Island, and so on. Walter, who called Kissinger by his original name of Heinz, provided the author with family documents and background information. Evidently what Kissinger has avoided having to remember was the trauma of his escape from the Nazis. Indeed, when Kurz succeeds in getting him before her cameras, he “turns as white as chalk” when the subject comes up.

Heinz Alfred Kissinger, remembered by relatives as “a great fat devil with lots of hair”, was born in the Bavarian town of Fürth in 1923. Here there was a substantial Jewish population, who ran the factories producing gilded mirrors and optical instruments. The Kissingers were weavers and traders, who had lived in the region for generations. Louis, Heinz and Walter’s father, trained to be a teacher, but just as he became senior master at the Helene-Lange-Gymnasium, Hitler came to power.

Jews were banned from the civil service and the military. Public educational institutions were closed to Jews, their businesses were boycotted, and the Reich Citizen Law deprived them of the right to vote. Heinz and Walter were forced to leave their school and Louis was “permanently retired”. Oddly he was to receive a full pension, which carried on being paid until his death in 1982.

The Kissingers’ bourgeois existence (piano lessons, theatre visits) abruptly ceased. Non‑Jewish neighbours turned their backs. It was Louis’s wife, Paula, who insisted that the family leave for a new life in America. On August 10 1938 they sailed from Le Havre to New York. It was a narrow escape: in November, Fürth’s synagogues were destroyed and the inhabitants of the Jewish orphanage were deported. By 1942, Louis and Paula’s siblings, and Kissinger cousins who had remained behind, believing that because they had been decorated during the First World War they would be immune, had all been sent to the gas chambers.

The refugees settled in the Bronx. Louis got a job in the accounts office of a shaving brush factory. In 1944, Heinz, now Henry, was sent back to Europe as an American soldier, part of a counter-intelligence section of an infantry regiment. Walter became a captain in Korea. On his return, Henry went to Harvard and obtained a doctorate for a thesis about Napoleon. As a young professor, he ran a study group on nuclear weapons and foreign policy, his work sponsored by Nelson Rockefeller. Hence his entry into the political sphere and – with Sellers and Kubrick – the satirical sphere.

Evi Kurz has discovered that Kissinger, an uneasy American, has been consolidating his ties with his birthplace. In 1998 he was made an honorary citizen of Fürth and has been given gold medals by the town council. He is often seen visiting the Jewish cemetery on Erlanger Strasse, paying homage at family graves. It is not beyond imagining that he will move back, for in Bavaria are his roots, and his identity.
Posted by Alex Constantine at Thursday, April 23, 2009