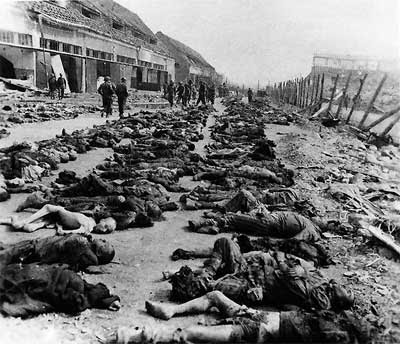 "What we are seeing in this project is that all of Europe was a camp. ... "

A little more than a decade ago, researchers at the U.S. Holocaust Memorial Museum decided to create an encyclopedia of concentration camps. They assumed the finished work would be massive, featuring a staggering 5,000 to 7,000 camps and ghettos.

Their ultimate count of more than 20,000 camps -- which they reached after a year of research -- is far more than most scholars had known existed and might reshape public understanding of the scope of the Holocaust itself.

"What's going to happen is that the mental universe of how scholars operate is going to change," said Steven Katz, director of Boston University's Elie Wiesel Center for Judaic Studies. "Instead of thinking of main death camps, people are going to understand that this was a continent-wide phenomenon."

The Encyclopedia of Camps and Ghettos: 1933-1945 "is the first major reference work for Holocaust studies since . . . the fall of the U.S.S.R." and the opening of many European archives, says Paul Shapiro, director of the museum's Center for Advanced Holocaust Studies. As a result, more information was available to researchers than had ever been before. Scholars chased footnotes in old books and used Internet mailing lists to find historians who might possess tiny pieces of the puzzle. Volume 1 is scheduled for release June 12.

Most of the sites included in the encyclopedia were known, says Geoff Megargee, the encyclopedia project director. "But they were known to one or two people. . . . Sometimes there would be just one person who had done research on one prison." The first volume focuses on SS-run camps and contains more than 1,100 entries written by some 230 contributors.

The Holocaust's horror always has been its precision and vastness: how many people died, how many people were complicit, how many countries fell to the Nazi regime. The enormous number of sites catalogued in the museum's encyclopedia reveals that for every commonly known camp -- Auschwitz and Dachau, Buchenwald and Bergen-Belsen -- there are literally dozens more that the average reader has likely never heard of. The book is organized as a traditional encyclopedia; each camp or ghetto receives its own alphabetic entry, some with photographs or maps.

Few people might realize, Megargee says, that each of the 23 main camps had sub-camps -- nearly 900 sub-camps, each placed into categories with chillingly euphemistic names. There were "care facilities for foreign children," where pregnant prisoners would be sent for forced abortions. There were Germanization camps, where foreign youth with desirable racial features would be indoctrinated. There were youth protection camps for the rebellious German teens who'd been caught listening to jazz.

In his decade of working on the project, Megargee says that he never stopped learning of new atrocities or personal stories.

"There was a woman who was a professional singer in the barracks" in a sub-camp of Flossenburg, he recalls, "who sang 'Ave Maria' for [her fellow prisoners] one Christmas. She moved the barracks to tears, then a guard overheard her and came and knocked her teeth out." Her story is recounted in the entry on the Wilischthal sub-camp.

The book reveals "a complex ecology of coordinated devastation," says Henry Knight, director of Keene State College's Cohen Center for Holocaust Studies in New Hampshire. He has previewed the book, and sees it as particularly useful for college students or serious Holocaust researchers, but adds that "anyone looking through this volume is going to be astounded at how vast the camp system was. . . . It's simply not possible to think of these activities as an aberration when you see all of the information."

Shapiro says that the sheer number of camps may end one of the lingering protestations surrounding the Holocaust -- that ordinary people knew nothing of the killing underway in their locales. "In most towns, there was some sort of prison, or holding area or place where people were victimized," Shapiro says. "Think about what this means. For anyone who thinks this took place out of sight of the average person, this shatters that mythology. There was one Auschwitz. There was one Treblinka. But there were 20,000 other camps spread through the rest of Europe."

Says Shapiro: "What we are seeing in this project is that all of Europe was a camp."