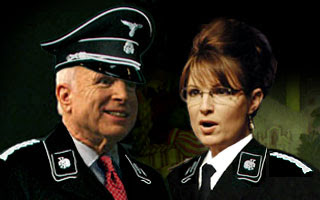 Caveat: This is National Review Online's slant on Hughley's comments - NRO is a CIA/fascist front, and the view that his comments were "slanderous" is obviously not my own. The GOP convention is an enclave of American Nazis, no stretch of objective fact - the US has systematically murdered more racial "subhumans" than the Nazis ever did. (In a single war, "we," without provocation, killed many more Vietnamese than the Nazis did Jews, and down to the very last drop of Napalm no one could explain what "we" were doing in Vietnam.) So the comparison isn't necessary. "American Nazis" would have sufficed because there is nothing lower than a doctrinaire Republican, and I see no reason to insult the German people with hyperbolic insults. - AC

Rich referred to this earlier. I wouldn't have thought it possible, but the video is much worse than described by Newsbusters' Michael Balan. He quotes a lot of what was said by the host, D.L. Hughley, about Republicans being like Nazis, but Balan goes on to report, incorrectly, that "[Michael] Steele did not verbally react to Hughley’s Nazi characterization." Steele not only did react but did so in a way that accepted Hughley's slanderous claim — Steele's infuriating come-back was to suggest that this description of Republicans as racists was valid, but now he, Michael Steele, was here to set things right.

Watch the video (linked in Balan's report) and judge for yourself. I did and made my own transcript, which follows:

Hughley: I’m tellin’ you, if it were the sign alone — In other words, the tenets of the Republican Party are amazing, and they seem warm and welcome. But when I watch it be applied — like you didn’t have to go much further than the Republican National Convention.

Hughley: It literally looked like Nazi Germany. It really did.

Steele: [ACM: I think he appears to be nodding his head slightly. Could mean he agrees — judging from the entire context, that’s certainly a fair interpretation — or it could mean he was simply following what Hughley was saying but not necessarily agreeing. Again, judge for yourself, but Steele is very clearly NOT objecting.]

Hughley: And I make — say that point, it just does not seem, like not only are we …