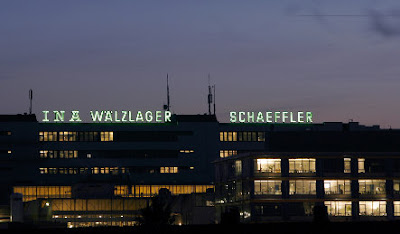 Feb. 26 (Bloomberg) -- Wilhelm Schaeffler, one of the founders of Schaeffler Group, was a member of the Nazi party and employed forced labor to produce weapons for the German military during World War II, Cicero magazine reported.

Schaeffler’s company, called Davistan AG at the time, was purchased in 1940 from creditors after being abandoned by its Jewish owner in 1933, according to Gregor Schoellgen, a historian commissioned by the Schaeffler family to research their past, the magazine said in its March issue. Wilhelm Schaeffler joined the Nazis in 1941 yet didn’t play an active role in the party, the report said.

Schaeffler, who died in 1981, was the brother-in-law of Maria-Elisabeth Schaeffler, who now owns Schaeffler Group with her son Georg. The manufacturer, strained by 11 billion euros ($14 billion) of debt from the purchase of Continental AG, makes transmission parts and ball bearings for cars, planes and fishing reels.

In 1942, Wilhelm Schaeffler converted some of the company’s textile production to the manufacture of bombs, armored vehicles and canons. He “acted as did most German industrialists of this time,” Schoellgen, a professor at the University of Erlangen, said in the report.

“Those who wanted to keep their companies above water entered the defense business and contributed to the German war and annihilation machine, whether they wanted to or not,” said Schoellgen.

Slave labor was used by the company from 1943 as military call-ups led to labor shortages, the magazine reported. Wilhelm Schaeffler was arrested in 1946 and imprisoned until 1951 for misappropriating Polish property.
The report rejects claims that the company used human hair from the Auschwitz concentration camp to produce textiles.

“All evidence today contradicts these suspicions,” said the report, adding: “None of the systematic searches of German archives in connection with Schaeffler found even a hint of links to Auschwitz, let alone the delivery of hair,” said the report.

Detlef Sieverdingbeck, spokesman for Herzogenaurach, Germany-based Schaeffler, said in an e-mail yesterday that Schoellgen was engaged several years ago to investigate business activities prior to Schaeffler Group’s founding in 1946 on the family’s own initiative.

“Because of false reports and allegations that have surfaced recently on the Internet, Professor Schoellgen published, for clarification, the most essential results of his research in Cicero,” he said.

The German industrialist family Schaeffler, creator of the eponymous auto parts group, collaborated with the World War II Nazi regime in Poland, according to a report in Cicero magazine.

The company initially specialised in textiles but converted to work in the arms industry and employed forced workers which included French, Poles, and Russians, historian Gregor Schöllgen wrote in the magazine's latest edition published on Thursday.

Schoellgen, who is based at the university in Erlangen, southern Germany, was mandated by heirs to the group's founders, including the current boss Maria-Elisabeth Schaeffler, to explore the family's archives, a company spokesman told AFP.

The research was completed two years ago but has not been published before.

It was released this week owing to "false allegations on the Internet" that the historian sought to clarify, the spokesman said.

According to the report, Schaeffler grew out of Davistan AG, a company owned by a Jewish family that fled Germany following calls for a boycott of Jewish firms by the Nazis, Schoellgen explained. The company was taken over by a consortium of banks that sold it in 1940 to Wilhelm Schaeffler, the researcher said.

Schaeffler began to produce military equipment and became a member of the Nazi Party, while his brother Georg also invested in the new company. In 1946, Wilhelm Schaeffler was arrested by US forces and turned over to Polish authorities.

He was convicted of "liquidating" assets that belonged to the Polish state and citizens, and Jews, "on behalf of the Third Reich," in 1949 and imprisoned in Poland until 1951, Schoellgen said.

Schaeffler's Internet site sets the start of its history in 1946, with the launch of a group to produce industrial parts such as needle rollers, a kind of specialised ball bearing, by Georg and Wilhelm Schaeffler.

The report in Cicero appeared after Schaeffler asked for public aid to avoid bankruptcy while expanding rapidly in recent years.

The company has been hit by the global slowdown in auto markets, and by the purchase last year of its much bigger German rival Continental, which has turned into a heavy weight on Schaeffler's finances.