50th anniversary: The Birth of the AFL

The rest is history
By JOHN MCCLAIN
Houston Chronicle
Aug. 8, 2009 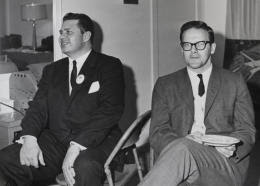 It wasn't considered a feasible plan to go against the NFL, but Bud Adams, left, and Lamar Hunt created their own league anyway

CANTON, Ohio — The first of what would be many history-making calls to Bud Adams was placed by Lamar Hunt's older brother, Bunker. It was February 1959.

“I'd known Bunker from Culver Military Academy,” Adams said recently. “He called from Dallas and told me his little brother, Lamar, wanted to come to Houston to talk to me about something. He said he didn't know what it was about. I told him to have him come to Houston so we could meet.”

In March, Hunt flew to Houston, and Adams picked him up at Hobby Airport. They had dinner at the Charcoal Inn, a restaurant Adams owned.

“We talked about everything but football,” Adams said. “I took him back to Hobby, and just before he got out of the car, Lamar said, ‘You tried to buy the (Chicago) Cardinals, right? So did I. I didn't have much luck. You didn't either, from what I understand. Before I go, let me ask you something: Would you be interested in starting a new league with me?'

So the groundwork was laid for what would become known as the Foolish Club — the eight original franchise owners of the American Football League. Hunt and Adams were charter members.

Adams, 36, and Hunt, 27, were sons of wealthy oilmen — Kenneth Stanley “Boots” Adams and H.L. Hunt — and both had been pursuing a franchise in the National Football League, which had 12 teams but only two, the Los Angeles Rams and San Francisco 49ers, that were west of the Mississippi River.

Hunt, who died in 2006, and Adams announced the formation of the AFL in Adams' Houston office on Aug. 3, 1959. The Dallas Texans and Houston Oilers were the first two franchises.

“First, I went after Bud,” Hunt told the Chronicle in 2004. “I felt that it was very important to have a Dallas and Houston rivalry. They were probably the two ripest cities in America that didn't have teams.”

Almost two weeks after their news conference in Houston, Hunt and Adams announced franchises in New York, Los Angeles, Denver and Minneapolis. Later, franchises were added in Boston and Buffalo. When Minneapolis backed out to get an NFL team, it was replaced by Oakland. ...