The Grandaddy of Toxic Talk Radio is Back 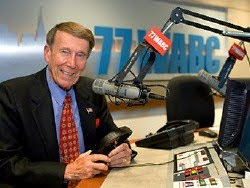 Bob Grant, a corporate clown who scapegoats minorities and liberals to distract attention from the atrocities of the ruling class

As if American talk radio wasn’t toxic enough, what with all of the right-wing nut cases who daily barrage us with their hatred of blacks, queers, environmentalists and left-wingers. Now, the defenders of keeping women barefoot and pregnant and gays in the closet have a new kid on the block, the grandfather of hate and intolerance, Bob Grant, who was ousted from New York City’s WABC radio in 1996 for his daily racist comments. Grant is returning to his old stomping grounds on September 13 to fill the airwaves with more of that good old-time American bigotry for which the medium has become famous.

Anyone who thinks this is good news must love Grant’s greatest hits, which include regular immigrant bashing and referring to African Americans as “savages” and “sub-human.” Grant once described former black New York Mayor David Dinkins as looking like “the men’s room attendant at the 21 Club.”

When a person with AIDS called Grant’s show and asked for a little sympathy, the vitriolic host told him that people with AIDS couldn’t die soon enough. One might say the same thing about old right-wing talk show hosts.

Grant didn’t just hate people of color, queers and leftists, he also freely expressed violent intentions towards them, once saying that New York police should open fire on the city’s annual Gay Pride Parade: “Ideally, it would have been nice to have a few phalanxes of policemen with machine guns and mow them down.”

As for the so-called tree-huggers: “I’d like to get every environmentalist, put 'em up against a wall, and shoot 'em.”

While denying that he was a racist (it’s difficult for me to even type that line without breaking into laughter), Grant decried the fact that whites could not openly express racist thoughts. “If they did,” he said, “the thugs, the savages, the refugees from Kalahari would tear the place apart. But I guess our group has evolved too far. I guess that’s the price we pay for being a little higher up on the evolutionary scale.”

Obviously, the only color the station sees is green.

Which is good news for those of us who oppose the venom that Grant and his ilk spew out every day. While free speech is sacred and I’d never deny anyone, even someone as morally challenged as Grant, the right to say what he wanted, advertising dollars are not protected under our Constitution.

Perhaps some of the station’s advertisers need to know that there are many people who don’t appreciate Grant’s verbal diarrhea. Wouldn’t it be funny if those who spend their dollars to support his program suddenly decided to spend them elsewhere?

Might be the best way to get rid of the old garbage.

Tommi Avicolli Mecca is co-editor of Avanti Popolo: Italians Sailing Beyond Columbus, and editor of Smash the Church, Smash the State: The Early Years of Gay Liberation, which has just been nominated for an American Library Association award. His website is www.avicollimecca.com