TELEVISION UNDER THE SWASTIKA (DVD REVIEW) 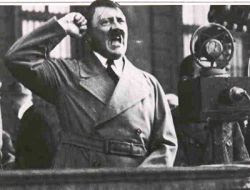 From 1935 through 1944, Nazi Germany took the unexpected lead in the development of television broadcasting. While the reach of the Nazi television was relatively limited – mostly to the political elite in Berlin and to Army hospitals – the new medium nonetheless found a diverse amount of programming ranging from cabaret-style entertainment to cooking shows to the tried-and-true propaganda posturing.

Michael Kloft’s documentary “Television Under the Swastika” provides a brief overview of the Nazi foray into television programming. Surprisingly, a great deal of 35mm films used for the broadcasts still survive, though no footage of the live telecasts survive from that pre-kinescope era.

Not surprisingly, much of the programming was terrible. Nearly everything circled back to painfully obvious cheerleading of the Hitler regime and its cockamamie policies; even cooking and gardening shows somehow found time to pay tribute to the inane Nazi leadership. Interviews with Nazi officials were par for the course, but they were visually stodgy and emotionally bankrupt.

Nonetheless, efforts were occasionally made to try something different and daring. Variety shows inevitably found chorus girls wiggling and giggling in provocative costuming (for the era), while a few non-political melodramas were staged for the relatively few people who were able to watch.

One of the final broadcasts on Nazi television from 1944 included a public service documentary dropping broad hints on how amputees in army hospitals can stay fit so they could return to the frontlines to fight the Allied forces. This boneheaded cluelessness offers a fitting symbol to everything that was rotten and stupid about the Nazi era.

But despite the frequent awfulness of the programming, this documentary provides a fascinating look at how the Nazis quickly recognized television’s power and tried to manipulate it for their devious purposes. For anyone interested in 20th-century German history and in the development of television as the most powerful mass media of the modern world, “Television Under the Swastika” provides an invaluable journey into the very unusual early days of television's rise.