GOP: Pay No Attention to Our Crazy Supporters Who Want to Kill Obama 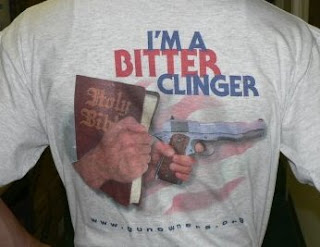 The Secret Service detained a man at a Maryland town hall yesterday carrying a sign reading, "'Death To Obama, Death To Michelle And Her Two Stupid Kids." Why don't Republicans at least say, "Don't threaten to kill the president"?

In all likelihood, the unnamed 51-year-old man carrying that sign wasn't an actual direct threat to the president's life. Neither was Gary Frago, the Atwater, California, city councilman who forwarded e-mails to his co-workers and friends joking about killing Obama (a fake letter, for instance, from John McCain to John Hinckley, Jr., explaining that he's about to be released and that Obama has been dating Jodi Foster). Neither was William Kostric, the asshole who brought a gun and a sign saying that it's time to "water the tree of liberty" to Obama's New Hampshire town hall earlier this week. None of these men presented an immediate, credible threat Obama. (Then again, people would probably have written off Hinckley as a harmless nut before he fired his shots.)

Kostric, we learned after seeing him interviewed on Hardball yesterday, was just a provocateur who sought to thumb his nose at authority and get on TV. But why did he want to get on TV? To spread his message and propagate his ideas. And what are his ideas? That it's time to shed the blood of our leaders. ...