9/11 reveals the criminal tendencies of a Nazi Clique

9/11 is the apparent work of a demonic consciousness associated with the pursuit of commericial profit and materialistic power.

Independent research suggests that the official Muslim conspiracy scenario regarding 9/11 is both logistically and physically impossible. If Muslims were not the ultimate architects of 9/11 which led to the "War on Terrorism", then members of what group were the effective perpetrators? Law enforcement is able to find the perpetrators of a crime, by critically evaluating 'motive' as well as trying to find "repeat offenders", who have committed similar crimes in the past. The apparent motive of 9/11 was to execute an agenda of "Global Conquest", by elites, that would be achieved through the extinguishing of basic rights. Critically acclaimed author Richard M. Dolan, and other scholars as well as activists, have referred to the context for understanding 9/11 as the "pursuit of Empire".

Global conquest has been a continued objective which elites have had, from the ancient empire of Egypt and Rome, into the World War II era in which Nazis sought to pursue this goal. Adolph Hitler, once reportedly said that "Terrorism is the best political weapon, for nothing drives people harder than a fear of sudden death." Indeed, from a criminologist perspective, the pattern of activity which accompanied the rise of Hitler's Nazi Germany, with the associated destruction of the German Reichstag, also with the apparent rise of fascism in America, in association with the similar World Trade Centre bombing, reveals the appearance that a "common" Nazi criminal intelligence is at work.

It appears that American democracy might have won the "battle" (so-to-speak) as far as World War II, but the Nazis seek to "win the war". Indeed, many wealthy interests in the United States were seduced by Nazi ideology during World War II, and provided active financial support to Adolph Hitler's war machine, while Americans were loosing their lives in Europe. Many Nazis were put on trial in rather public spectacles, but many were not, and were welcomed by Nazi sympathizing American wealthy interests. 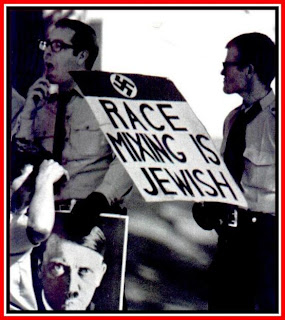 The repeating of the Reichstag tragedy in 9/11, seems to be a way of paying tribute to the viewed "genius of Adolph Hitler", by a new generation of Nazis that are committed to his "superior values", while they at the same time demonstrate how "stupid" and "inferior" the American public must be, to accept the Muslim conspiracy scenario. If Americans were indeed, as smart as the "Master Race", then they would have seen 9/11 perpetrators as obvious repeat Nazi offenders. However, the fact that Americans could be "duped", shows their apparent inferiority, in the apparent view of Nazi social psychology.

The Reichstag Fire as a 9/11 like pivotal event in Nazi Germany ...

Prior to the fire, and during the election campaign in which Hitler eventually won, the Nazis had run on a platform of hysterical anti-communism, insisting that Germany was on the verge of a Communist revolution, and that the only way to stop the revolution was to pass the Enabling Act. The Enabling Act was a special power allowed by the Weimar Constitution to give the Chancellor (in this case, Hitler) the power to pass laws by decree, without the involvement of the Reichstag.

The Enabling Act was only supposed to be used in times of extreme emergency. In fact, Hitler's platform during the campaign comprised little more than demands that voters increase the Nazi share of seats so that the Enabling Act could be passed.

The Reichstag Fire, allowed Hitler to accelerate the banning of the Communist Party, and was used to confirm Nazi claims of a pending Communist revolution. The Nazis argued that the Reichstag fire was meant to serve as a signal to launch the revolution, and warned the German public about the grisly fate they would suffer under Communist rule.

Eventually, the Nazis got their wish. They managed to pass the Enabling Act -- essentially turning Adolph Hitler into the Supreme Ruler of Germany. Eventually, Hitler managed to "parlay" this supremacy into the genocide known as the Holocaust.

9/11 was an extremely pivotal event, in an apparent elite-orchestrated effort to create a fascistic America. It started one morning when four (4) planes were hijacked... And from all accounts, it was "an open and shut case". Although there was no 'half-naked person cowering behind the wreckage,' like the Reichstag's Van der Lubbe, there was, within a few days following the hijackings, amazingly detailed dossiers on each of the hijackers.

Luckily, each of the hijackers left copies of the Koran, box cutters, and aircraft piloting manuals in the trunk of their rental cars parked at the airport. But even more amazing, on September 12, U.S. Senator Orrin Hatch said "the U.S. was monitoring bin Laden supporters and overheard them discussing the attack." This was cited in an Associated Press news wire on September 12, 2001. Somehow, this little tidbit has always been lost in the shuffle. One wonders 'why'?.

Prior to taking control of Washington, reportedly the elites were already planning on invading Iraq. But there was no public support for such a campaign prior to 9/11. Moreover, prior to 9/11, on three occasions, U.S. President George W. Bush publicized his envy of dictatorships:

"You don't get everything you want. A dictatorship would be a lot easier." Mr. Bush describing life as the governor of Texas, in July 1998 edition of Governing Magazine.

"If this were a dictatorship, it would be a heck of a lot easier, just so long as I'm the dictator," Bush joked in a CNN report on December 18, 2000.

"A dictatorship would be a heck of a lot easier, there's no question about it," Mr. Bush was quoted to have said in the July 30, 2001 edition of Business Week. 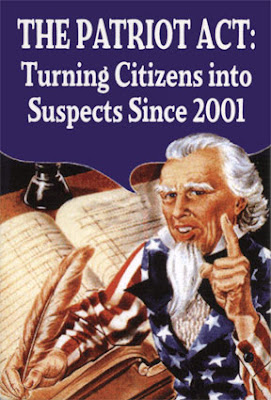 On October 2, 2001, the U.S. "Patriot" Act is introduced in the U.S. Congress. Within the next couple of days, Senate Judiciary Committee Chairman Patrick Leahy (D) accuses the Bush administration of reneging on an agreement on this anti-terrorist bill, cited in the Washington Post, October 4, 2001. Anthrax letters are also sent to Leahy and Senate Majority Leader Tom Daschle (D).

For the next few weeks, America is induced to be freaked out (and rightfully so) by a series of anthrax letters, that reach not just the two Democratic Senators, but also various media companies that have been previously labelled as "liberal" by the right wing. During this scare, it is speculated by various Establishment "pundits" that the letters are being sent from al-Qaeda or perhaps Iraq. During this scare, the Anthrax story is also front page news, discussed almost 24 hours a day on the various news channels.

After an FBI investigation, it turns out that the Anthrax letters contain an anthrax strain which originates from a U.S. Army base, and that the likely source of the letter is a U.S. government insider. But for some strange reason, this AMAZING FACT is hardly covered by the major media outlets. And after the revelation, the story becomes hardly discussed even though, to this day, the anthrax case has not been solved (or has it?). Nevertheless, 9/11 and the anthrax scare are used by elites and President Bush to take the country to war against Iraq. It turns out that Iraq had absolutely no connection to the 9/11 attacks nor to the anthrax attacks.

Similar to Germany's Hitler, the U.S. Bush administration, also came to power with a minority of votes (remember, he didn't even win the popular vote in 2000); and has since exploited the terrible tragedies of September 11 in much the same way the Nazis exploited the Reichstag fire.

The current U.S. President Bush administration has used American fear and anger, which has resulted from the tragedies of 9/11, and from anthrax, to push an apparent extreme rightist agenda aimed at devouring civil liberties, muting dissent, fattening a war machine and arrogating the right to unilaterally attack other countries without tangible and/or legal provocation.

Concurrently, with all of this, elites have shamelessly mounted assaults against the natural environment, social security, human rights, organized labour, and a wide range of international treaties, including the Geneva Convention. Combining fear with elements of jingoistic patriotism and religion, the Bush regime has strong-armed its way into an overtly militaristic and imperialistic policy which is aimed at taking over the world's greatest oil assets, )including the Iraqi oil fields and the Afghanistan pipeline).

Ironically, the American traditional brand of conservatives profess themselves to be staunch opponents of Big Government. Yet so-called "Patriotic conservatives" and fascistic "Neocons" have trashed virtually every guarantee of individual freedom on which American greatness has been built. Under the guise of fighting terrorism and national security, the administration has become the ultimate anti-Constitutional terrorist-- going so far as detaining hundreds of people for years without charges ever being brought against them, without trials, hearings, or the right to counsel. And even more disgusting, these so-called patriots support the use of torture -- ultimate acts of barbarism and terrorism.

Dealing with the ultimate perpetrators of 9/11 WILL NOT be redressed by blaming one or a handful of individuals in the Establishment. Rather, redressing 9/11 can be effectively redressed ONLY if Americans and other people globally can focus on what Dr. David Ray Griffin has called the "demonic consciousness" which appears to bear ultimate responsibility for 9/11, and the ensuing "War on Terrorism". This demonic consciousness exists in America, through capitalism itself. Capitalism is eating away at America and the rest of the world, through "Economic Globalization" like a kind of cancer, that is associated with the pursuit of commercial profit and materialist power irrespective of human social and environmental costs.