Officials in Nigeria have brought criminal charges against pharmaceutical giant Pfizer for the company's alleged role in the deaths of children who received an unapproved drug during a meningitis epidemic.

Authorities in Kano, the country's largest state, filed eight charges this month related to the 1996 clinical trial, including counts of criminal conspiracy and voluntarily causing grievous harm. They also filed a civil lawsuit seeking more than $2 billion in damages and restitution from Pfizer, the world's largest drug company.

The move represents a rare -- perhaps unprecedented -- instance in which the developing world's anger at multinational drug companies has boiled over into criminal charges. It also represents the latest in a string of public-relations blows stemming from the decade-old clinical trial, in which Pfizer says it acted ethically. ... 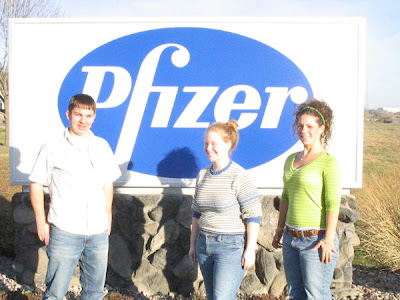 MINDLESS BUT HAPPY: Midwest American Quislings find "conspiracy theories" amusing – so do the conspirators – and enjoy killing Iraqis, torturing detainees, waving flags and agitating to "protect the unborn." It's evident that there is a ready market for Pfizer's anti-depressants among the boobocracy in the increasingly warm Wasteland.
Posted by Alex Constantine at Tuesday, May 29, 2007