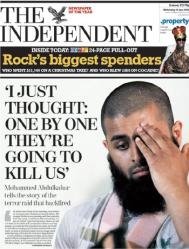 Mohammed Abdulkahar tells the story of terror raid that backfired

'I just thought: one by one they're going to kill us'

At about four o'clock in the morning, I was woken by screams that I had never heard before. My younger brother was screaming and, from upstairs, from my room, I could hear him screaming, so I got out of bed. I just had my boxer shorts on and a T-shirt. It was dark and I assumed a robbery was happening. As I made the first step down the stairs, my brother was still screaming and I turned round to look at the stairs. As soon as I turned round, I saw an orange spark and a big bang. I flew into the wall and I slipped down.....

I was on the floor. I looked on my right, on my chest, and saw blood coming down my chest and saw the hole in my chest. At that moment, I knew I was shot. The first thing I was thinking was that an armed robbery was taking place. As I went down, I saw an object flying in my face, so I put my hand over my face. At that moment, I did not know what object it was, but I know now it was the gun.