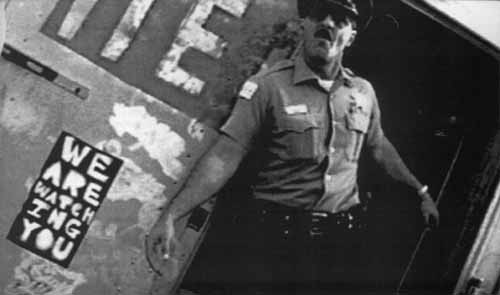 [... FX down ... ] This exercise was made possible by grant funding from The McCormick Tribune Foundation and The Oklahoma City National Memorial Institute for the Prevention of Terrorism ...

On 22-23 June, 2001, the Center for Strategic and International Studies, the Johns Hopkins Center for Civilian Biodefense Studies, the ANSER Institute for Homeland Security, and the Oklahoma City National Memorial Institute for the Prevention Terrorism, hosted a senior-level war game examining the national security, intergovernmental, and information challenges of a biological attack on the American homeland. 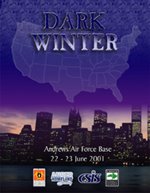 “DARK WINTER”was developed and produced by:

The Oklahoma City National
Memorial Institute for the Prevention of Terrorism

With tensions rising in the Taiwan Straits, and a major crisis developing in Southwest Asia, a smallpox outbreak was confirmed by the CDC in Oklahoma City. During the thirteen days of the game, the disease spread to 25 states and 15 other countries. Fourteen participants and 60 observers witnessed terrorism/warfare in slow motion. ... Additionally, a predictable 24/7 news cycle quickly developed that focused the nation and the world on the attack and response. Five representatives from the national press corps (including print and broadcast) participated in the game, including a lengthy press conference with the President. ...

DARK WINTER was an exercise designed to simulate possible US reaction to the deliberate introduction of smallpox in three states during the winter of 2002.

The players were introduced to this crisis during a National Security Council meeting scheduled to address several emerging crises, including the deployment of a carrier task force to the Middle East. At the start of the meeting, the Director of Health and Human Services informed the President of a confirmed case of smallpox in Oklahoma City. Additional smallpox cases were soon identified in Georgia and Pennsylvania. More cases appeared in Oklahoma. The source of the infection was unknown, and exposure was presumed to have taken place at least nine days earlier due to the lengthy incubation period of smallpox. Consequently, exposed individuals had likely traveled far from the loci of what was now presumed to be a biological attack. The exercise spanned 13 days, and served as a vehicle to illustrate the following points.

1) An attack on the United States with biological weapons could threaten vital national security interests. Massive civilian casualties, breakdown in essential institutions, violation of democratic processes, civil disorder, loss of confidence in government and reduced US strategic flexibility abroad are among the ways a biological attack might compromise US security.

2) Current organizational structures and capabilities are not well suited for the management of a BW attack. Major “fault lines” exist between different levels of government (federal, state, and local), between government and the private sector, among different institutions and agencies, and within the public and private sector. These “disconnects” could impede situational awareness and compromise the ability to limit loss of life, suffering, and economic damage.

3) There is no surge capability in the US health care and public health systems, or the pharmaceutical and vaccine industries. This institutionally limited surge capacity could result in hospitals being overwhelmed and becoming inoperable; could impede public health agencies’ analysis of the scope, source and progress of the epidemic, the ability to educate and reassure the public, and the capacity to limit causalities and the spread of disease.

5) Should a contagious bioweapon pathogen be used, containing the spread of disease will present significant ethical, political, cultural, operational and legal challenges.

SMALLPOX, because of its high case-fatality rates and transmissibility, represents one of the most serious biological warfare threats to the civilian population. In 1980, the World Health Assembly announced that smallpox had been eradicated and recommended that all countries cease vaccination. Although labs in two countries still officially store smallpox samples (US and Russia), its re-appearance would almost certainly indicate an intentional outbreak.

Aerosol release of smallpox virus disseminated among a relatively small population could result in a significant epidemic. Evidence suggests the infectious dose is very small. Several factors are cause for concern: the disease has historically been feared as one of the most serious of all pestilential diseases; it is physically disfiguring; it bears a 30 percent case-fatality rate; there is no treatment; it is communicable from person to person. Vaccination ceased in this country in 1972, and vaccination immunity acquired before that time has undoubtedly waned. Prior to eradication, data on smallpox outbreaks in Europe indicated that victims had the potential to infect 10 to 20 others. However, there has never been a smallpox outbreak in such a densely populated, highly mobile, unvaccinated population such as exists today.

In 1947, in response to a single case of smallpox in New York City, 6,350,000 people were immunized (500,000 in one day), including President Harry Truman. In 1972, after disappearing from Yugoslavia for four decades, a single case of smallpox emerged. There are two ways to control a smallpox epidemic – vaccine and isolation. Yugoslavia’s Communist leader, Josip Tito, used both. He instituted a nation-wide quarantine, and immunized the entire country of 20 million people using vaccine supplied by the World Health Organization.

Estimates of the current US supply of smallpox vaccine range from seven to twelve million doses. This stock cannot be immediately replenished, since all vaccine production facilities were dismantled after 1980, and renewed vaccine production is estimated to require at least 24-36 months. The Centers for Disease Control and Prevention recently contracted with a Cambridge, MA firm to produce 40 million doses of new vaccine. Initial deliveries will not begin before 2004.

SOME OF THE EXERCISE OBSERVERS