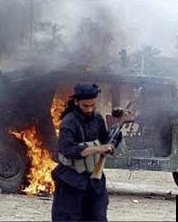 The American public is being prepared. If the attack on Iran does come, there will be no warning, no declaration of war, no truth, writes John Pilger

The lifts in the New York Hilton played CNN on a small screen you could not avoid watching. Iraq was top of the news; pronouncements about a "civil war" and "sectarian violence" were repeated incessantly. It was as if the US invasion had never happened and the killing of tens of thousands of civilians by the Americans was a surreal fiction. The Iraqis were mindless Arabs, haunted by religion, ethnic strife and the need to blow themselves up. Unctuous puppet politicians were paraded with no hint that their exercise yard was inside an American fortress.

And when you left the lift, this followed you to your room, to the hotel gym, the airport, the next airport and the next country. Such is the power of America's corporate propaganda, which, as Edward Said pointed out in Culture and Imperialism, "penetrates electronically" with its equivalent of a party line.

The party line changed the other day. For almost three years it was that al-Qaeda was the driving force behind the "insurgency", led by Abu Musab al-Zarqawi, a bloodthirsty Jordanian who was clearly being groomed for the kind of infamy Saddam Hussein enjoys. It mattered not that al-Zarqawi had never been seen alive and that only a fraction of the "insurgents" followed al-Qaeda. For the Americans, Zarqawi's role was to distract attention from the thing that almost all Iraqis oppose: the brutal Anglo-American occupation of their country.

Now that al-Zarqawi has been replaced by "sectarian violence" and "civil war," the big news is the attacks by Sunnis on Shia mosques and bazaars. The real news, which is not reported in the CNN "mainstream", is that the Salvador Option has been invoked in Iraq. This is the campaign of terror by death squads armed and trained by the US, which attack Sunnis and Shias alike. The goal is the incitement of a real civil war and the break-up of Iraq, the original war aim of Bush's administration. The ministry of the interior in Baghdad, which is run by the CIA, directs the principal death squads. Their members are not exclusively Shia, as the myth goes. The most brutal are the Sunni-led Special Police Commandos, headed by former senior officers in Saddam's Ba'ath Party. This unit was formed and trained by CIA "counter-insurgency" experts, including veterans of the CIA's terror operations in central America in the 1980s, notably El Salvador. In his new book, Empire's Workshop (Metropolitan Books), the American historian Greg Grandin describes the Salvador Option thus: "Once in office, [President] Reagan came down hard on central America, in effect letting his administration's most committed militarists set and execute policy. In El Salvador, they provided more than a million dollars a day to fund a lethal counter-insurgency campaign . . . All told, US allies in central America during Reagan's two terms killed over 300,000 people, tortured hundreds of thousands and drove millions into exile."

Although the Reagan administration spawned the current Bushites, or "neo-cons", the pattern was set earlier. In Vietnam, death squads trained, armed and directed by the CIA murdered up to 50,000 people in Operation Phoenix. In the mid-1960s in Indonesia CIA officers compiled "death lists" for General Suharto's killing spree during his seizure of power. After the 2003 invasion, it was only a matter of time before this venerable "policy" was applied in Iraq.

According to the investigative writer Max Fuller (National Review Online), the key CIA manager of the interior ministry death squads "cut his teeth in Vietnam before moving on to direct the US military mission in El Salvador". Professor Grandin names another central America veteran whose job now is to "train a ruthless counter-insurgent force made up of ex-Ba'athist thugs". Another, says Fuller, is well-known for his "production of death lists". A secret militia run by the Americans is the Facilities Protection Service, which has been responsible for bombings. "The British and US Special Forces," concludes Fuller, "in conjunction with the [US-created] intelligence services at the Iraqi defence ministry, are fabricating insurgent bombings of Shias."

On 16 March, Reuters reported the arrest of an American "security contractor" who was found with weapons and explosives in his car. Last year, two Britons disguised as Arabs were caught with a car full of weapons and explosives; British forces bulldozed the Basra prison to rescue them. The Boston Globe recently reported: "The FBI's counter-terrorism unit has launched a broad investigation of US-based theft rings after discovering that some of the vehicles used in deadly car bombings in Iraq, including attacks that killed US troops and Iraqi civilians, were probably stolen in the United States, according to senior government officials."

As I say, all this has been tried before - just as the preparation of the American public for an atrocious attack on Iran is similar to the WMD fabrications in Iraq. If that attack comes, there will be no warning, no declaration of war, no truth. Imprisoned in the Hilton lift, staring at CNN, my fellow passengers could be excused for not making sense of the Middle East, or Latin America, or anywhere. They are isolated. Nothing is explained. Congress is silent. The Democrats are moribund. And the freest media on earth insult the public every day. As Voltaire put it: "Those who can make you believe absurdities can make you commit atrocities."