Daniel Goldin: Creature from the Black Vault, Part One

Daniel Goldin - touted widely by the press, denounced coldly by critics within and without NASA - has been making public appearances since his resignation in 2001, of course:

ASTROBIOLOGY: LIFE AMONG THE STARS
May 13, 2005
Schoenberg Hall Auditorium, UCLA
...
DANIEL S. GOLDIN (Intellisis Corporation, San Diego, CA) Discovery of Life on Other Worlds: What Will it Mean? ... Prior to his
nearly ten years of service as NASA’s Administrator, Mr. Goldin oversaw the development the Compton Gamma-Ray and
Chandra X-ray Observatories while he was also Vice President and General Manager of the TRW Space and Technology Group.
Today, he is a Senior Fellow at the Neurosciences Institute in San Diego, where he is engaged in the development of biologically inspired robots and computers, and is founder of the Intellisis Corporation, which focuses on high tech
consulting and biologically based technologies...

And all this on a Bachelor's degree. This is same man who oversaw a doomed, hopelessly incompetent string of Mars missions, and now he's creating biological robots.

Goldin's been making political contributions, too:

"In his commencement address to 2,122 graduates of MIT, Daniel S. Goldin, NASA's Chief Administrator, suggested that they would be responsible for 'perhaps the most dramatic revolution in the history of humankind.'

"In the next 50 years, the nano-revolution will make it possible to control technology at the atomic scale, cure diseases, solve
global climate change, make sustainable development a reality, and replace traditional technology with systems that mimic biology or integrate biology.

"Computers will behave more like the human brain. Airplane wings will adapt to different flight conditions. Systems will be self-sensing and self-correcting," he said. He exhorted the graduates to go forth "with imagination, ingenuity and audacity. Explore, discover, change the world, and have fun while you're doing it." 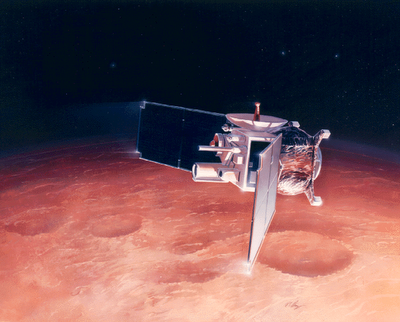 He has bonds to criminalized intelligence officials, particularly at the NSA, corrupt lobbyists and political lowlifes, and these date to his roots at TWR where he was employed on black budget programs. At NASA, he worked closely with the NSA and Jet Propulsion Laboratory (another key element in the series of failed Mars missions). JPL director Lou Allen once ran the NSA. Before leaving NASA in November 2001, Goldin let on that the JPL falls under the direction of its Oversight Committee at Caltech. Admiral Bobby Ray Inman, the former NSA director, was the head of the oversight Committee.

Leuren Moret of the San Francisco Bay View made the connection in September 2004: "Criticism of NASA/JPL Mars mission failure problems in the Thomas Young Report released on March 28, 2000, revealed that the supposedly public space program had been hijacked into secrecy and that the military was calling the shots." Goldin divulged on March 29, 2000, "the day after release of the report, just who was in control and the existence of an oversight committee that nobody at JPL knew existed: 'I'd also like to acknowledge Admiral Inman, head of the JPL Oversight Committee at Cal Tech. He couldn't be here today, but I talked to him by phone. His commitment to the team here is also unwavering. And I thank him for that.'"3

Goldin has long curried favor with Inman. Moret described Inman as "the center of the spider web. A look at his social network helped put the ‘puzzle palace’ together, and I discovered he was national security advisor to five Presidents, Director of the NSA... president of SAIC, Chair of the 1985 Congressional ‘Inman Commission' on Terrorism, affiliated with the Carlyle Group, on the advisory boards of Tufts and the University of Texas, represents SBC Communications Corporation at Cal Tech, Chairman Dallas Federal Reserve Bank, and a member of both the Council on Foreign Relations and the Trilateral Commission.... One could say he is a dangerous man."

Goldin is also a dangerous man. His tactics are subtle, but the results of his corrupt management of Cleveland's NASA Glenn Research Center were often explosive.

And there were the conflicts of interest ...

New Year's day, 2001 - Cleveland, Ohio's SecureState announced in a holiday press release that it had been awarded "a multi-year contract with NASA Glenn Research Center to provide technical security services..." That's funny... SecureState (SS) had little to show in the way of a track record. The firm's web site states: "From its beginning in 2001, SecureState has consistently delivered innovative information technology and technical services solutions to its customers." Clearly, NASA wasted no time contracting with the computer security firm - the bidding process and security checks must have taken place in the blink of an eye.

Perhaps it was the mega-competence of SS management that led to the contract.

And Macon Sims, Jr., a key advisor to SS, was the founder of Knight Protective Services in 1988. "Prior to starting the company, Mr. Sims, a Vietnam veteran, was one of the top non-commissioned officers in the Army. As Sergeant Major, Mr. Sims worked closely with the U.S. Secret Service, designing and executing contingency plans in support of security for the President of the United States."4 (In October 2002, Knight Protective Services signed $17.3 million, five-year contract with NASA Glenn. Since 9/11, security has been beefed-up considerably. Currently, security contracts at NASA Glenn Research Center are held by Knight ((security, guard, and visitor control)), Booz-Allen Hamilton ((financial and Accounting Support Services)), SAIC ((Environmental Analyses) and Lockheed Martin (hardware and software acquisition)), among others.5)
---
NOTES